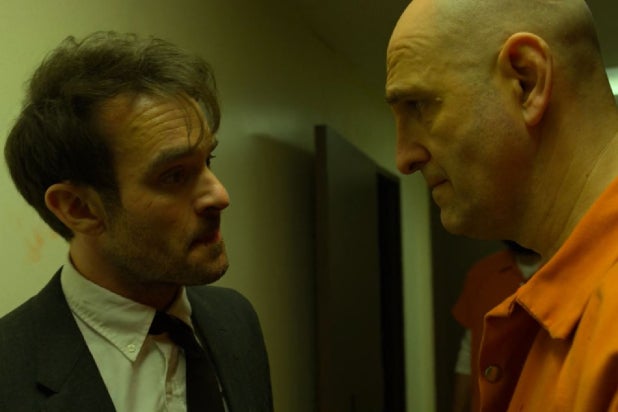 (Warning: This story contains spoilers from the third season of Netflix’s “Daredevil”)

New “Daredevil” showrunner Erik Oleson had a lot of crazy ideas for his run on the third season of the Marvel TV drama.

And none were more insane than that ridiculous prison breakout scene in the fourth episode. The sequence, which is a single shot (meaning it was one camera continuously rolling with no cuts), spans 11-and-a-half minutes and features Matt Murdock (Charlie Cox) fighting his way out of a prison — without his superhero costume. Oleson himself was surprised that Marvel even allowed him to do it.

“When you’re a showrunner and you call up your studio and you tell them that you want the crew to show up for work, but not film a single frame, because instead you’re going to rehearse one shot for an entire day, pretty much any studio in town is going to tell you — you’re insane,” Oleson tells TheWrap. “But, Marvel gave its blessing.”

In the scene, Murdock is investigating a link between Wilson Fisk (Vincent D’Onofrio) and an Albanian crime syndicate, which he believes will invalidate a deal Fisk cut with the FBI that got him out of prison. But since Murdock is assumed dead following the events of “The Defenders,” he has to enter the prison under the guise of Foggy Nelson (Elden Henson), using his New York State Bar ID number to get in. Because of this, he does not have the luxury of putting on a mask. Fisk ends up using his connections to trap Murdock in the prison, forcing him to fight his way out.

The sequence was such a challenge to film that even Oleson and the episode’s director, Alex Garcia Lopez, had to build in safety nets. “[If] one single thing doesn’t go perfect, you can’t use it,” star Charlie Cox told TheWrap.

Oleson explained they set up dimly-lit corners in the hallways of the prison where they could’ve hidden a cut if they had to. “But when the crew and Charlie, and all of the moving pieces actually came together and pulled it off, in post-production I actually turned the lights up in the hallway, just slightly, so that the audience would be able to see that the camera never cuts,” said Oleson. “We ended up with a fight sequence I’m very hopeful is going to get our stunts team nominated for an Emmy.”

Even Cox said that at first, he also questioned whether they could pull it off, but he was “up for the challenge,” noting that the full day of rehearsals helped them get it right.

Also Read: 'Orange Is the New Black' to End With Season 7

“We took a day off, rehearsed everything with the stunt team and the camera department and all of the departments,” Cox continued. “And then we came back and we just started trying to shoot it. And we got a couple of quite good takes, then we had a number of takes that didn’t quite work, or didn’t get through, and then we all went to lunch, and then it was when we came back from lunch we did one final take and it was, you know, pretty perfect.”

Cox described the difficulty of switching out with his stunt double, Chris Brewster, without the ability to edit the swap, saying that what made the sequence so challenging was remembering every little moment and executing each move perfectly.

“There’s one point in particular where, Chris is kicking someone from the floor, and he kicks and then his leg retracts, and then the leg kicks again but this time it’s my leg,” Cox explained. “And so… if there’s a moment where you can see both feet, then it doesn’t work, you know, you’ve ruined [it]. So it has to be absolutely perfect.”

Cox continued that it’s “probably our greatest achievement thus far,” adding with a laugh: “And yes, I was, I felt incredibly beat up after that.”

Since it debuted in 2015, “Daredevil” has been lauded for its fight choreography. The show’s second episode featured a three-minute, single-shot scene that takes place in one hallway (known as “The Hallway Scene”). The prison break sequence was Oleson’s way of one-upping that, but also tied into his “series of rules” he imposed on the fight scenes this season.

“I very much wanted to treat the fight sequences as a way to force Matt Murdock into dilemmas, where he had to choose between two rights or two wrongs, and whatever he decided would give us an insight into his character,” he said. “I wanted to have real stakes. There had to be something beyond just seeing Daredevil fight.”

Cox echoed Oleson’s sentiment, saying that he wanted to know that there’s a reason behind every fight sequence. “It’s not just like action for action’s sake, or putting the black costume on just because it’s cool when we did it before.”

Also Read: 'Daredevil' Season 3 Trailer: Wilson Fisk Is Out of Prison - And Who Is That Second Daredevil? (Video)

The end result of that action-packed sequence certainly carried the narrative significance that Oleson was hoping to achieve.

“Wilson Fisk is watching that video [on the prison cameras] and now he knows for sure that Matt Murdock and Daredevil are the same person,” he explains. “For me personally, the best form of storytelling treats action sequences as an integral part of the character’s journey and of the plot.”