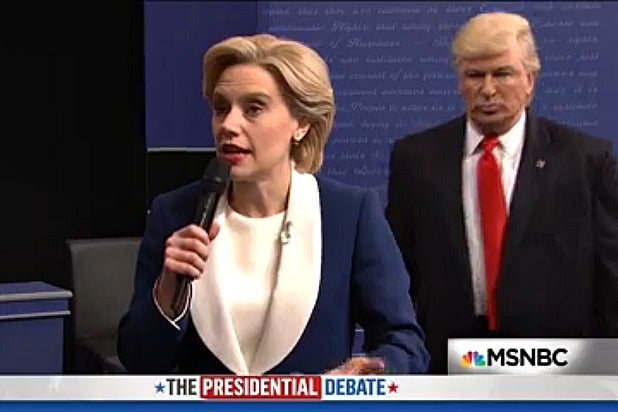 No matter what happens on November 8, “Saturday Night Live” is a clear winner this election. And it owes a huge debt to Donald Trump.

Recent Emmy winner Kate McKinnon, who brilliantly portrays Clinton, is the cast’s biggest star. But Alec Baldwin‘s take on Trump has been the most talked-about political impersonation since Tina Fey played Sarah Palin.

Timing is one of the most important parts of comedy, and it’s perfect this fall for “SNL,” a show executive creator Lorne Michaels debuted way back when Gerald Ford was president. This could have been a rebuilding year after the show parted ways with fan favorites Taran Killam and Jay Pharoah over the summer.

But Trump has made this year special — even more than a normal “SNL” election year.

“I think the writers get energized when they’ve got an election,” said Tom Shales, the longtime Washington Post critic, Pulitzer Prize winner, and co-author of “Live From New York: An Uncensored History of ‘Saturday Night Live.'”

“It’s like: Is the cart pulling the horse or the other way around? I don’t know,” Shales told TheWrap. “Do the writers write better because of the excitement of an election, or do they contribute to the excitement, and therefore it’s a self-fulfilling prophecy?”

“It’s a spiking thing,” Shales continued. “The ratings spike when they have an election year, and the show spikes in quality.”

While quality is subjective, the Nielsen numbers aren’t.

The Season 42 premiere earned a 5.8 rating per those Nielsen local-market results, the best premiere since 2008 — the era of Palin. The Oct. 1 season premiere had 12.194 million total viewers with one week’s worth of delayed viewing included, making it the most-watched “SNL” premiere in 22 years.

Shales’ fellow critics have liked to say in recent years that “SNL” is at a disadvantage because it airs just once a week, often after all the late-night hosts have had a chance to weigh in one big news stories.

But Trump seems to make bombastic news every day — never-ending material is one of the greatest luxuries of the Trump brand.

For example, the now-infamous Billy Bush/”Access Hollywood” hot-mic story broke on a Friday, so head writers Rob Klein, Bryan Tucker, Chris Kelly and Sarah Schneider had one of the freshest takes the next evening at 11:30 p.m.

The show’s cold open that week found Baldwin-as-Trump apologizing on-air, then making ever-more-horrible comments when he thought his mic was off.

Shales — a self-described “huge, huge fan” of the show — believes the quality and ratings for “SNL” could cool down after the election. He doesn’t believe it’ll be a “going off a cliff”-type situation, however.

Eleven months ago, NBC caught flak for letting Trump host “SNL.” Critics said the show was giving a platform to bigotry and racism.

Also Read: Why Trump.Org Says 'Vote No' to Donald Trump

Shales was not among those voices.

“Even the people who were mad at them and condemn them, that lights them up on the big board,” he said. “More people will tune in then. That’s the business they’re in. It’s not the satire business — it’s the body business, like any other commercial network television program.”

“They’re not particularly culpable,” Shales added. “Would he still be a big star on the political scene if he hadn’t done ‘Saturday Night Live?’ I think so.”

This year, few would accuse the show of giving Trump a pass. Including Trump himself.