Nick Weerts remembers the moment during the 2016 presidential campaign he realized he might need an intervention.

“I found myself watching YouTube clips of one of the debates on my laptop, reading a Huffington Post article about the debate on my iPad and firing off political stories to friends on my phone, at 1 o’clock in the morning,” laughed Weerts, a 34-year-old mental health counselor from Minnesota. “I just couldn’t stop.”

Viewers like Weerts are making networks richer. The race for The White House is proving to be a ratings windfall for networks and cable news channels, all cashing in on what has become this year’s must-see-TV.

It’s hard to say just how much money each network has made since the 2016 cycle began. Much of the commercial inventory was already sold ahead of time, and broadcasters aren’t exactly keen on discussing their finances.

But a media buyer from one of the largest agencies in the country told TheWrap (on the condition of anonymity) that “news networks are now charging about the same as an average 30-second spot on primetime TV networks such as CBS, NBC, ABC and Fox. And rightfully so, because the eyeballs are there.”

From the beginning of the cycle, it was clear this election was like no other. More than 24 million people tuned in to see moderator Megyn Kelly go head-to-head with Donald Trump during the first GOP debate on Fox News in August, the highest-rated primary debate of all time.

CNN, which hosted the second GOP debate in September, quickly jacked up its ad prices by 40 times its normal rate, according to AdvertisingAge. While an average 30-second spot during CNN’s primetime coverage would usually cost about $5,000, the network charged advertisers an eye-popping $200,000, AdAge said. That’s just under what it would cost to buy ad time on some of TV’s biggest heavy hitters such as ABC’s “Modern Family,” and about the same as AMC’s hit show “Better Call Saul,” according to AdAge’s annual report on ad prices published in September.

Though the ratings for the debates have gone down since then, the 2016 election season is still a huge draw. The last Republican debate on March 10 managed to bring in close to 17 million viewers — just under that week’s episode of AMC’s “The Walking Dead,” cable’s most-watched show, and almost double the audience of ABC’s biggest hit, “Scandal. ” 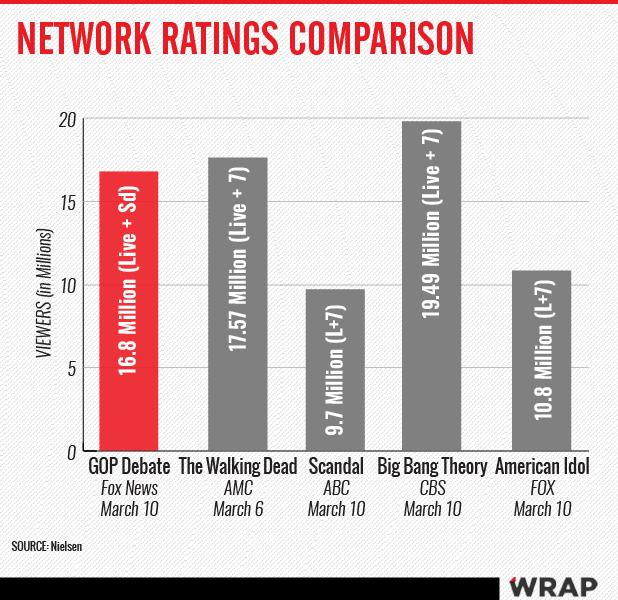 Of the 20 primary debates this cycle, 14 netted over 10 million viewers, numbers normally not seen until much later in the election cycle, between the nominees for president and vice president.

Even the so-called “kid table” debates, featuring lower-tier candidates struggling to gain traction, proved to be gold mine, with commercial spots going for a reported $50,000 to $60,000 a pop.

And it’s not just the Republican side that’s seeing record-breaking numbers. The Democratic primary race got an unexpected ratings jolt from a Democratic socialist from Vermont, Sen. Bernie Sanders.

The first Democratic debate, hosted by CNN in October, drew 15.3 million viewers. While that may not sound nearly as impressive as the first two Republican debates, it shattered the Democrats’ previous record for a primary debate set in 2008, when then-Sen. Barack Obama and Hillary Clinton faced off in their first highly-anticipated debate of the season and drew 10.7 million viewers.

Also Read: CBS' 'Sunday Morning': Megyn Kelly Opens Up About Life on the Other Side of the Lens

“Undoubtedly, the 2016 election is one of those elections that has absolutely captivated the attention of the public,” CNN Washington Bureau Chief Sam Feist told TheWrap. “We had no idea how fascinating and telling it would ultimately become.” 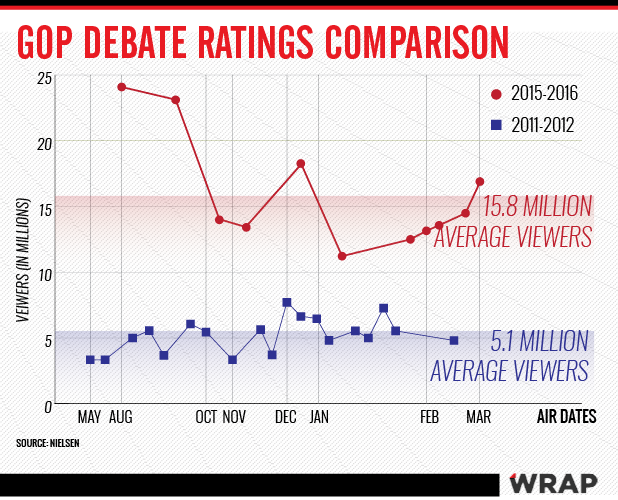 Add to that the countless town halls, press conferences, speeches and a never-ending supply of mean tweets courtesy of Trump, and you start to understand why networks are practically giddy about their financial prospects.

In a leaked email to CNN employees, network chief Jeff Zucker made it clear just how profitable the 2016 elections were turning out to be.

“Through this cycle, CNN is confirmed to host 15 debates and town halls; the most anyone else is scheduled to host is four,” Zucker wrote with the excitement of kid on Christmas morning. “From an audience perspective, the viewers are watching.”

And earlier this month, CBS chief executive Leslie Moonves told investors at a conference in San Francisco that the “circus” of the 2016 presidential race “may not be good for America, but it’s damn good for CBS,” adding, “the money’s rolling in.”

The 2016 cycle has another thing going for it, as far as broadcasters are concerned. Thanks to Citizens United, the 2010 Supreme Court ruling which essentially removed limits on individual and corporate spending, this year’s race has been flooded with so much cash, it makes previous cycles’ profits seem like Monopoly money by comparison.

Through March 30, more than $265 million in Super PAC money has been spent on the 2016 primary race, with much of it going to TV ads, according to OpenSecrets.org. That’s already more than three times the amount spent on the entire 2012 primary season… and we’re only half-way through.

According to a report by The Intercept, aptly titled: “Media Executives Are Salivating Over Big Money Flooding the 2016 Election Cycle,” Vince Sadusky, the chief executive of Media General, the parent company of 71 television stations across the country, bragged about the amount of money his company would make, telling investors in February, “We are really looking forward to the 2016 elections with spending on the presidential race alone estimated to surpass $5 billion.” Some have estimated it at more than $11 billion.

But perhaps the biggest reason the 2016 cycle has become so popular, is its unpredictable cast. With an over-the-top billionaire reality star who seems to say whatever pops into his head on one side, and a populist, self-described socialist (so inspiring even birds can’t seem to resist him) on the other, the race to the White House had all the markings of a highly-addictive soap opera. And like any good daytime drama, this one owed much of its success to its marquee star, Donald Trump.

“It’s clear that Donald Trump is the one bringing in the ratings,” Chris Ariens, TV/media editor for Adweek, told TheWrap. “I haven’t seen anything like this and neither have the networks, which is why they’re taking great advantage whenever they can.”

And boy, are they ever.

On Tuesday, CNN announced it wrapped up the first quarter of 2016 with the most-watched total daytime viewers since 2009 and its best primetime viewership since 2008.

Meanwhile, MSNBC was able to deliver its most-watched quarter in over three years, improving its dayside viewing (9 a.m.-5 p.m.) by more than 133 percent in adults 25-54 and 83 percent in total viewers since last year.

And if that’s not proof that 2016 has been good to TV networks, even Fox News, which consistently leads in the the TV ratings, delivered its best quarter in its nearly 20-year history. According to Nielsen, FNC was the No. 1 cable network across all of cable in both daytime and primetime for the first time ever.

While the number of debates is limited, that’s not the case with town halls. In an effort to capitalize on its audience’s insatiable appetite for 2016 election coverage, networks booked what seemed like an endless succession of town hall events. Unlike debates, town halls feature candidates taking the stage one at at a time.

With less fighting, they don’t usually draw nearly as many viewers as debates. But they still manage to attract two to three times the average primetime cable news network audience.

The town hall frenzy reached almost comical proportions last month, as networks practically stumbled over each other in an effort to book as many as possible. When CNN announced a two-day town hall in February featuring all six remaining GOP candidates, with three candidates on each of the days, MSNBC quickly booked frontrunner Donald Trump for a competing town hall on the night he wasn’t already committed to CNN.

After Trump and Ohio Gov. John Kasich decided to skip a Fox News debate earlier this month, which then forced the network to cancel the event at the last minute, MSNBC swooped in and scheduled him and all the rest of the presidential candidates for its eighth town hall of the season.

While there are no more sanctioned debates currently on the books, there is already talk of adding at least one more Democratic debate in New York. Feist says the network hopes that even more will be added.

In the meantime, CNN held its ninth town hall on Tuesday in Milwaukee. It was the most-watched in cable news history, averaging 3.26 million total viewers. Not be outdone, MSNBC held two town halls on Wednesday, for a grand total of 12 such events for the network this season. And Fox News has already scheduled a town hall on Sunday with Trump, hosted by Greta Van Susteren.

Nick Weerts can’t wait to see what the networks will come up with next.

“I watch three to four hours every day now,” he added. “This is so much better than ‘American Gladiators.’ I mean Donald Trump’s chief of staff is now beating up reporters at his events,” he said. “It’s crazy.”