In the spring of 2003 I got a call from Will Russell and Scott Shuffitt (that’s them below) inviting me to the 2nd Annual Lebowski Fest in Louisville, Kentucky. They described it as a two-night affair, the first at a movie theater and a bar and the second at a bowling alley. 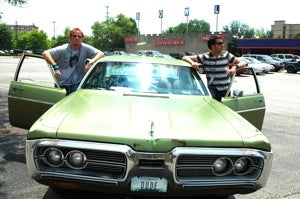 They were thrilled that 150 people actually came to the first take — an idea they hatched when they ran into each other standing in line at a tattoo convention and started trading lines from “The Big Lebowski” to pass the time.

They hoped if “The Dude” showed up for Round 2, and they added a few fun activities throughout the weekend, they might be able to draw hundreds more.

I instantly flashed on that classic William Shatner, aka Captain Kirk, skit on “Saturday Night Live,” when he appears at a “Star Trek” convention and the Trekkies (all in costume and socially ill-at-ease) ask him one question after another as if “Star Trek” were real.

Shocked by this parallel universe, Shatner asks the mostly male audience if any of them have ever gone out with a girl — to be answered with dumbfounded stares. Exasperated he says, “Get a life.”

So I was a tres dubious about being surrounded at Holiday Inn in Louisville by a bunch of “Achievers” — as Scott and Will referred to themselves and their cohorts.

Let’s flashback for a little back story with the help of Roger Ebert:

“Everybody knows somebody like the Dude — and so do the Coen brothers,” Roger wrote in the Chicago Sun-Times. “They based the character ‘The Dude,’ played by Jeff Bridges in ‘The Big Lebowski’ on a movie producer and distributor named Jeff Dowd, a familiar figure at film festivals, who is tall, large, and shaggy and a boil with enthusiasm. Dowd is much more successful than Lebowski (he has played an important role in the Coens’ careers as indie filmmakers), but no less a creature of the moment. Both dudes depend on improvisation and inspiration.” 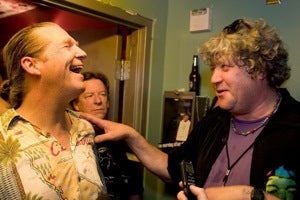 I picked up the moniker “The Dude” when I was in sixth grade, and my friends Dave and Danny riffed on Dowd and turned it into Dude — a nickname that others would apply wherever I moved, without any hint of its past use.

When I helped Robert Redford start the Sundance Institute in 1981, something happened that first June that was either by chance, destiny or both. A man from Minnesota, who supported some of Redford’s environmental causes, dropped by Sundance and mentioned that he had invested some money in a little indie picture by a couple of whacked-out, yet brilliant intellectual brothers, who hailed from the Land of 10,000 Lakes.

He asked Bob if he had any advice, and Redford brought him over to meet me. The two brothers were Joel and Ethan Coen. He said that he would put them in touch with me when they completed the film.

A few months later, I stepped into a Hollywood screening room and saw “Blood Simple.”  It was clear that cinematic genius was at work. The writing, directing, acting, cinematography, music and editing all had both a sense of classic film noir tradition, with the unique Coen brother’s touch of irony, satire and black comedy.

I became the producer’s representative for the film, which meant I was charged with finding a distributor — a task that would prove challenging because “Blood Simple” defied simple categorization and that scared all the distributors so much so that they would all pass on it three times. 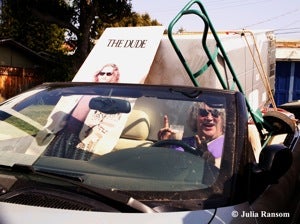 It wasn’t until we showed it to distributors in a packed house at the Toronto Film Festival that they observed how well the black comedy played. As often is the case when so-called experts are wrong, audiences and critics were excited by Joel and Ethan’s unique filmmaking approach. They got behind the movie and helped distributors understand that there was a market out there for it.

I was lucky enough to be there at the right time to help build a bridge from Joel and Ethan to the audiences that would cherish the films they would go on to make twisting, bending and combining genres populated with great actors and extreme characters.

The character of the Dude in “The Big Lebowski” was somewhat inspired by what they thought I might have been like for a short time in the ‘70s, after my intense activist years and Seattle Seven jail time (for talking about the Viet Nam War) when my friends and I were doing a fair amount of hanging out, imbibing the drink of the month, Tequila Sunrises, White Russians and Maui Wowie. I did that for a year before I went to work in the film biz.

Joel and Ethan also liked riffing on the name: “The Dude, Duder, Duderino, if you aren’t into that whole brevity thing.” The body language is all me, the plot is Joel and Ethan dosing Raymond Chandler with laughing gas and acid.

John Goodman’s Walter, the about-to-explode Viet Nam vet who the Coens also froze in the past, is the crazed buddy who drives the film always getting his best friend, the Dude, in trouble in the tradition of Tony Curtis in “Some Like it Hot” or Mel Gibson in “Lethal Weapon” or Butch with the Sundance Kid (to tie this blog room together).

The Dude: “Walter, what is the point? Look, we all know who is at fault here, what the fuck are you talking about?”

Walter Sobchak: “Huh? No, what the fuck are you … I’m not … We’re talking about unchecked aggression here, dude.”

Donny: “What the f— is he talking about?”

Walter Sobchak: “Forget it, Donny, you’re out of your element!”

The Dude: “Walter, the chinaman who peed on my rug, I can’t go give him a bill, so what the f— are you talking about?” 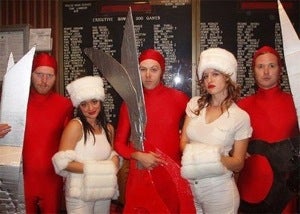 The Dude: “Walter, this isn’t a guy who built the railroads here. This is a guy …”

Walter Sobchak: “Donny you’re out of your element! Dude, the Chinaman is not the issue here!”

Thousands of people have told me over the years that the Dude inspired them and changed their lives. When I hear it from college students, I respond: “I hope you’re not gonna take this slacker too seriously and drop out.”

Phil Cousineau, the Renaissance man, who Joseph Campbell asked to carry on for him, somehow captured the Dude’s appeal the best: “I’ve known Jeff Dowd for years co-teaching ‘Myth and Movie’ workshops with him. I can’t help thinking about ‘The Dude’ as living large in the tradition of the Holy Fool. Since ancient times it’s been believed that the artist, the jester, the saint and the fool all share the sacred function of helping us see through the illusions of the world. 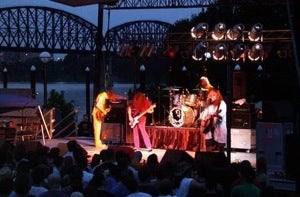 People who often have to put on a mask at work identify with the Dude like Sam Elliott’s “The Stranger” in “Lebowski”: “The Dude abides. I don’t know about you but I take comfort in that. It’s good knowin’ he’s out there.”

So I rationalized that I could visit Muhammad Ali’s hometown for the first time, tour the Louisville Slugger baseball factory and go to the races at Churchill Downs and so — against my better judgment — I decided to attend the Lebowski Fest.

I am thrilled that I did. As it turns out the “Achievers” are very social bunch of folks who are smart enough to appreciate Joel and Ethan’s sense of irony.

The first night at Lebowski Fests they always have bands and then show the film. It is quite an experience to watch “The Big Lebowski” with 1,000 people if you have only seen it at home. (See accompanying blog about the L.A. Fest on May 7-8.)

The Dude: “Nobody calls me Lebowski. You got the wrong guy. I’m the Dude, man.”

The Dude: “My … my wi–, my wife, Bunny? Do you see a wedding ring on my finger? Does this place look like I’m f—ing married? The toilet seat’s up, man!” 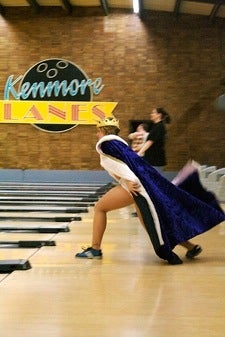 Before the band, My Morning Jacket (that’s them above) came on, the Mayor of Louisville gave me a key to the city. When I joked, “I thought it would be a different kind of key,” I could see the mayor’s face watch his career go up in smoke as he realized he might have just made a big mistake showing up at Lebowski Fest. But all was good and he survived.

The second night of Lebowski Fest is always at a large bowling alley. Fret not, armatures, the Achievers are much better drinkers and talkers than they are bowlers. (FYI the Dude never bowls in the film.) About half the people come dressed up in costumes — not just characters from the movie but lines from the movie which is an absolute surreal experience not to be missed — a great example of living theater. You can dress up or just have a few Caucasians, make friends, bowl and watch the show.

So check out the website. Take look at the info from this week’s Lebowski Fest on Thursday and Friday, May 7 and 8. (The screening is May 7 at the Wiltern Theater; bowling is May 8 at Cal Bowl.) And also look at the photos from past Lebowski Fests — it sure to put a smile on your face.

And then get together with a few friends and join us. There are some pretty good hotel and motel deals near the Lakewood Bowl, which is a mile from the Long Beach Airport if you’ve always wanted to spend a Friday night in Orange County.

BTW I don’t make money off of this — that would be “over the line” and very “un-Dude-like.”

Be there or be square!

Jeff Dowd is a Los Angeles-based writer/producer, producer’s representative and a nationally recognized authority on marketing, distribution and exhibition. He is a political activist and a frequent speaker at colleges, film festivals and organizations on a wide range of subjects. He's now editing his book “The Dude Abides: Classic Tales and Rebel Rants Making Our Future the Best of Times.”

Jeff Dowd is a Los Angeles-based writer/producer, producer’s representative and a nationally recognized authority on marketing, distribution and exhibition. He is a political activist and a frequent speaker at colleges, film festivals and organizations on a wide range of subjects. He's now editing his book “The Dude Abides: Classic Tales and Rebel Rants Making Our Future the Best of Times.”