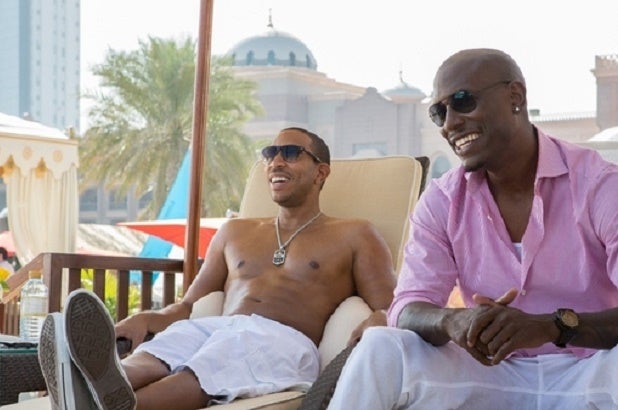 The spectacular opening of “Furious 7” is still reverberating, and Universal’s action epic should again finish at No.1 and command most of the attention at the box office this weekend.

“The Longest Ride,” an adaptation of a Nicholas Spark romance novel starring Scott Eastwood and Britt Robertson, is the only movie opening nationwide and distributor Fox would be happy to see it hit $15 million. To put this weekend’s race in perspective, “Furious 7” made nearly that much ($14 million) on Monday alone.

That means it will be a victory lap for “Furious 7,” leaving how far and fast the record-breaking sequel will fall in its second lap as the most intriguing question this weekend.

The last two “Fast and Furious” films were front-loaded, and fell off a little over 60 percent in their second weeks. That’s fairly steep, but if the well-reviewed “Furious 7” does that, it will come in with around $60 million for the three days thanks to its massive $147 million debut, the best of 2015 and the best ever in April.

“Furious 7” has played very well this week and is likely to cross the $500 million mark at the global box office on Thursday, putting $1 billion within reach. It’s currently at $174 million domestically and has taken in another $315 million from overseas.

“The Longest Ride,” like other adaptations of Sparks’ romance novels, will rise or fall based on the combined appeal of its two leads, the hunky Eastwood and Robertson.

She starred in two TV series on the CW, “A Life Unexpected” and “The Secret Circle,” and is the female lead opposite George Clooney in the sci-fi mystery “Tomorrowland,” which opens May 22.

“Their chemistry is great,” said Chris Aronson, distribution president at Fox, “and George Tillman has made a really nice movie, so ultimately the word will get out.”

It has on social media, to a degree. On Twitter, it’s way ahead of the last film based on Sparks’ work, “The Best of Me,” but trails it on Facebook.

DreamWorks Animation’s “Home,” also distributed by Fox, is entering its third week and will be the family favorite, but “The Longest Ride” will be the only fresh offering for adults. That should help it get off to a solid start, important because if it falters there may be suggestions that moviegoers’ long-running affair with Sparks may be waning.

Last October’s “The Best of Me” was the lowest debut of all his films at $10 million in October, and it topped out at $27 million domestically for Relativity. That’s a long way from 2004’s “The Notebook” or 2010’s “Dear John,” which starred Channing Tatum and Amanda Seyfried and opened to $30 million and ultimately brought in $80 million for Sony.

Like most Sparks adaptations, “The Longest Ride” was filmed in and is set in North Carolina, where Robertson was born. Middle America is the sweet spot in terms of the rollout, which will see the PG-13 romance in roughly 3,300 theaters.

“The Longest Ride” was produced by Fox 2000 and Temple Hill Productions, the company run by Wyck Godfrey and Marty Bowen that was behind the “Twilight” movies and last summer’s “The Fault In Our Stars,” a breakout hit for Fox.