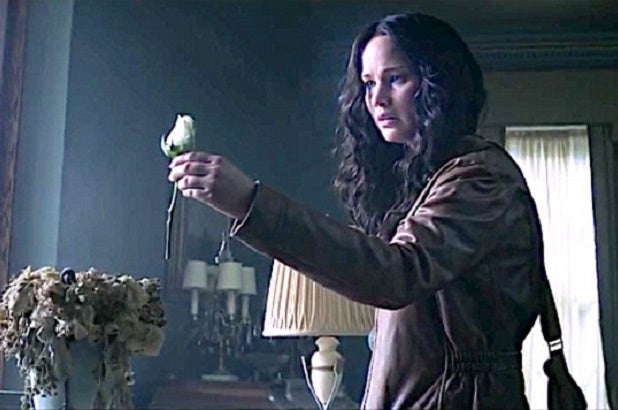 Jennifer Lawrence and “The Hunger Games: Mockingjay – Part 1” are all but certain to post 2014’s biggest box office opening this weekend.

The questions are, how high will it go and will it be a record-breaker?

Lionsgate is hoping for around $150 million for the first installment of “The Hunger Games” franchise finale, comparable to the openings of the first two films. Some analysts are more bullish and see it going well above that, but pre-release tracking grows significantly less reliable when it gets this high, so it’s a tricky call.

Anywhere in that lofty neighborhood will easily top the $100 million June debut of “Transformers: Age of Extinction” and make it by far the biggest opening in a year in which the overall box office is running about four percent behind last year. But “Mockingjay – Part 1” — the second installment arrives in November of 2015 — will to a great extent be measured by how it fares in comparison with the first two films.

An opening over $150 million by “Mockingjay” will make “The Hunger Games” the first franchise ever to deliver debuts that high with its first three movies. And if it tops the $158 million opening of the preceding film in the series, last November’s “Catching Fire,” it will be the biggest debut ever in that month. The first “Hunger Games” opened to $152.5 million in March of 2012.

Francis Lawrence, who came aboard to direct the well-reviewed “Catching Fire,” is back on “Mockingjay.” Michael Arndt and Simon Beaufoy adapted Suzanne Collins’ final book in the bestselling trilogy. The producers are Nina Jacobson and John Kilick.

The PG-13 rated “Mockingjay” will be in a saturation-level 4,151 theaters, though none will be 3D or IMAX. The giant screen chain is instead sticking with Christopher Nolan’s space epic “Interstellar,” which is heading into its third weekend. Early screenings for the most ardent fans will begin at 8 p.m. Thursday in roughly 3,200 theaters.

The lack of upcharges from those theaters and no 3D won’t help the “Mockingjay” grosses. The reviews are pretty good (81 percent positive on Rotten Tomatoes) but not great, and the fact that it’s the first part of the finale could cause some moviegoers to wait for the final episode. But that’s about it in terms of negative signs.

It’s by far the biggest seller of the year at online ticket brokers MovieTickets.com and Fandango, where it was accounting for 90 percent of all advance sales. And the social media indicators are through the roof, with “Mockingjay” nearly doubling the mentions of “Catching Fire” on both Twitter and Facebook, according to BoxOffice.com. Trailers and special features have drawn a staggering 125 million views on YouTube.

“Mockingjay” will also roll out in 85 foreign markets — all the major territories except China, Japan and India — this weekend, making it the year’s largest day-and-date global opening.

While “Mockingjay” will command most of the attention this weekend — rival studios have given it a wide berth and it’s the weekend’s only wide opening — some high-profile holdovers should do significant business.

The current No. 1 film, the Jim Carrey-Jeff Daniels comedy sequel “Dumb and Dumber To,” returns for its second week. And the Matthew McConaughey space saga “Interstellar” and Disney Animation’s “Big Hero 6” are back for their third weekend.