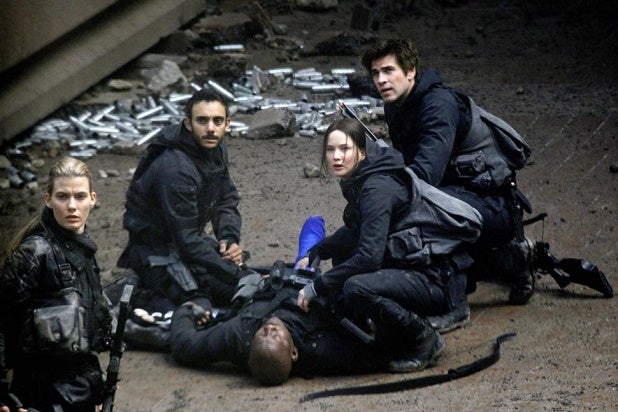 The $20.6 million that IMAX Theaters brought in for Christopher Nolan‘s “Interstellar” globally this weekend broke the record for the biggest November opening haul ever for the giant-screen exhibition chain.

The previous high was the $17.1 million that “The Hunger Games: Catching Fire” took in last year. But the next installment in the Jennifer Lawrence franchise isn’t going to see any IMAX returns from its opening, because the exhibitor has elected to stick with the space epic rather than go with Lionsgate’s “The Hunger Games: Mockingjay – Part 1” when it debuts Nov. 21.

Neither Lionsgate nor IMAX commented Monday, but the decision probably has something to do with the giant screen company’s long-running relationship with Nolan.

The director filmed more than an hour of “Interstellar” using special 65 millimeter IMAX cameras, which he also utilized in filming “The Dark Knight” and “The Dark Knight Rises.” Over the weekend, IMAX locations made up 19 of the top 20 sites showing “Interstellar” and delivered $13.2 million — a record 26 percent of the space epic’s domestic grosses.

“I think it’s the right decision from a strategic standpoint too,” B. Riley analyst Eric Wold told TheWrap. “You look at how (‘Interstellar’) played this weekend and it compares very much to ‘Gravity.'” He pointed out that the per-screen average of $36,400 for ‘Interstellar’ was almost on par with the $36,500 opening weekend per-screen average for ‘Gravity’ last October even though its run time is nearly double.

“I think that like ‘Gravity,’ it’s going to have a very long shelf life. People want to see ‘Interstellar’ on IMAX and they’ll be willing to wait. I don’t think people will say, ‘Well, the IMAX is sold out, so let’s see it in 2D.”

Scenes from the last “Hunger Games” film, “Catching Fire,” were also shot in using the IMAX cameras. It received a full IMAX run when it debuted last November, and provided $12.6 million of that film’s $161.1 million opening weekend.

With or without IMAX, “Mockingjay” should do very well at the box office. Early tracking has it on pace for the year’s biggest opening, and it has a good shot to become the first franchise in which the first three films have opened to more than $150 million.