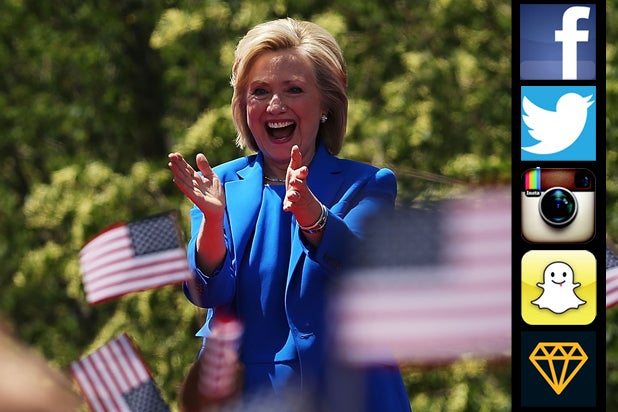 What a difference eight years make.

When Hillary Clinton ran for president in 2008, she was assailed as a relic of the past, out of touch with average Americans’ struggles as a new, of-the-people dynamo named Barack Obama toppled the Clinton machine on his road to 1600 Pennsylvania Avenue.

He did so on the back of hope, change — and social media.

Hillary had a hard time maneuvering around and leveraging the then-new world of social media as Obama’s team expertly created an online movement while building a huge supporter database through open-source technology. Meanwhile, Clinton had a poorly designed MySpace page, at one point infamously naming herself as her top friend.

“Her 2008 message was all about strength and experience and showing that she could be commander in chief and tended to use more traditional communications outlets than the Obama campaign did,” Ben LaBolt, former Obama Press Secretary during the 2012 campaign, told TheWrap. “The [2016] Clinton campaign has shown that they understand that her digital presence needs to be more social, more casual, more engaging.”

Hillary 2.0 is emerging as a savvy social media manipulator. Since announcing her second bid for the White House in April, she’s built a vast, cutting-edge social media infrastructure with accounts on Twitter, Snapchat, Spotify, Instagram and video streaming app Periscope.

She’s even mastered Genius, a brand-new digital platform that allows Internet users to annotate and comment on songs and texts. Her exploding digital and social media portfolio has already earned her the nickname “The First Teen POTUS.”

Per @liahaberman, today @HillaryClinton was on Twitter, snapchat, Spotify, periscope, and I imagine Facebook. The first teen POTUS?

Her new strategy is already showing promising results. According to an analysis by Zignal Labs, published by The Washington Post, 59 percent of all 2016 chatter last weekend was about Clinton. In other words, three out of every five stories or posts written about any presidential candidate mentioned the former Secretary of State, a 39 percent jump from the week before.

The survey also shows her favorables are up dramatically: Sentiment was 64 percent positive over the 48-hour weekend, compared to just 50 percent during the week prior.

And that, experts say, has a lot to do with how she communicates to her voters. Her social media voice seems more relaxed and, at times, even funny. Her first post on her newly minted Instagram account earlier this month was a picture of red, white and blue pantsuits hanging from a clothes rack with the caption, “hard choices.” The image, posted on June 10, has already garnered 25,000 likes and more than 6,000 comments.

“One thing you’ll notice about her social media campaign is that it’s not all about her, it’s about the average American and their stories,” LaBolt said. “The second thing she’s done is she’s not just going on these social platforms for a one-off announcement or statement — there’s content there, sometimes several times a day.”

The former Secretary of State’s social presence shows that she gets the moment that we’re in, LaBolt said: “It’s engaging, it’s interactive. It’s not filled with a bunch of dry policy announcements. It’s personal, it’s story-driven.”

Another social media expert points to the significance of authenticity, an issue that Clinton’s advisers have targeted for improvement from her 2008 campaign. She’s been advised to speak to as many voters as possible, early and often, while tossing aside her “I’m in to win” bravado of ’08 in favor of “the middle class’s champion” message.

“It feels like she’s a real person,” Chad Kawalec, social media expert and founder of “The Brand Identity Center,” told TheWrap. And as the sea of political journalists and TV stars complain about lack of access to and interviews given by Clinton, she continues to push back on that “relic of the past” meme, bypassing the establishment media to reach voters where they now live.

But it’s not all selfies and sunshine for Clinton. Experts say there are areas she still needs to improve.

“I would give her a B,” Oliver Luckett, founder of Los Angeles-based media company theAudience, told TheWrap. Though she’s built a base of 900,000 Facebook followers and generated 10 million interactions with her candidacy announcement, he noted, “She hasn’t had her Ellen DeGeneres selfie moment or Obama’s hug moment yet.” He added that her team could diversify its social content instead of using similar images and text across Facebook, Twitter and Instagram.

Still, Clinton is expected to face stiff competition online — along with as many as 20 G.O.P. candidates. “She’s ahead of Republican candidates at this point, but many of them are building out engaging digital and social presences,” LaBolt said. “This isn’t going to be an empty field. There will be competition.”

Younger candidates like Florida Sen. Marco Rubio and Texas Sen. Ted Cruz are expected to make a generational appeal to younger voters via social media, while Kentucky Sen. Rand Paul has already gotten a good deal of traction online thanks to a very engaged activist base.

Paul’s social prowess can be credited to his libertarian-laced supporters base; commonly filled with young diehards who naturally consume content across social media. As of now, he has 630,000 followers on Twitter and another 2 million on Facebook.

The X factor in the campaign will be reaching out to the so-called “persuadables” whom both parties will need to claim victory. For Clinton and her social media team, friending herself on MySpace won’t be enough.