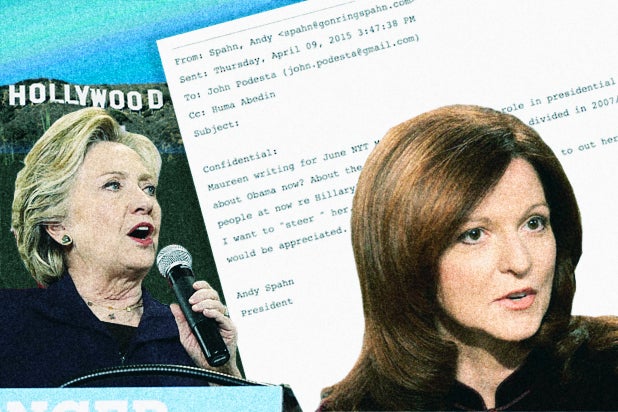 When New York Times columnist Maureen Dowd asked an A-list Hollywood fundraiser who she should interview for a piece about Hillary Clinton, he knew just who to ask: Clinton’s campaign chairman.

“I want to ‘steer’ her,” fundraiser Andy Spahn wrote in an April 2015 email to John Podesta marked “confidential.” “She is asking who she should talk to out here…. any guidance on your end would be appreciated. Thanks.”

A rep for Spahn, Marie Lloyd, tried to downplay the email, telling TheWrap that “steer meant he was looking for suggestions of Clinton supporters that she might reach out to.”

Dowd told TheWrap she was amused by the attempt to manipulate her.

“I thought that Clintonworld gave up trying to steer me a long time ago,” she said by email. “So it’s sort of sweet to know that they still care.”

Politicians’ supporters routinely try to spin reporters by leading them to favorable sources. But Dowd was a particular concern, given her influence and 1999 Pulitzer Prize for her commentary about President Bill Clinton’s affair with Monica Lewinsky.

The email, which was CC’d to top Clinton aide Huma Abedin and Clinton’s traveling press secretary Nick Merrill, was sent on April 9, 2015, just three days before Clinton announced her second bid for the White House.

Spahn told Podesta that Clinton was writing a June piece for the New York Times Magazine about Hollywood’s “big role in presidential politics…how do people feel about Obama now? About the Clintons? Why was Hollywood divided in 2007/2008 and not now? Where are people at now re Hillary?”

The latest batch of hacked emails from Podesta, released this week by Wikileaks, does not include any response from him. Dowd told TheWrap that she was planning to write a piece for New York Times magazine, but decided to turn it into a column instead.

“The idea of seeing how Hillary was faring in Hollywood during the Democratic primary, after the rip-roaring civil war over Hillary Clinton and Barack Obama in 2008, started as a magazine piece,” Dowd said. “But, in the end, I decided that it worked better as a column.”

It does not appear that Clinton’s supporters succeeded in winning her a favorable piece.

Dowd’s column, “Hooray for Hillarywood?” was published on the May 30, 2015 and Hollywood’s support for Clinton to “a forced march.”

“Is Hollywood really ready to give a 67-year-old woman a leading role in a big-budget production?” Dowd wrote.

“There’s this feeling like, ‘Oh, damn! Now we’re all going to have to show up to Jeffrey [Katzenberg]’s event,'” said one person Dowd described in her piece as a “studio big shot.”

Dowd, who has written many critical articles on Hillary and Bill Clinton over the years, said support was also flagging for President Obama. “They aren’t over the moon about Barack Obama anymore, and even feel burned. He was like a razzle-dazzle trailer that turned out to be a disappointing movie with mediocre box office,” she wrote.

Spahn, the founder and president of Los Angeles’ Andy Spahn & Associates Inc. works with heavyweight Democratic donors like Jeffrey Katzenberg, Steven Spielberg and David Geffen. In the 2008 and 2012 elections, Spahn and Katzenberg held about a dozen events for President Barack Obama, including one in 2011 at the home of George Clooney that brought in $15 million.

Without confirming the emails, the Clinton campaign said in a statement to TheWrap that the leaks were “a Russian attempt to influence our election through a crime reminiscent of Watergate but on a more massive scale… instead of filing cabinets, it’s people’s emails they’re breaking into and a foreign government is behind it.”

Here is the email from Spahn to Podesta: