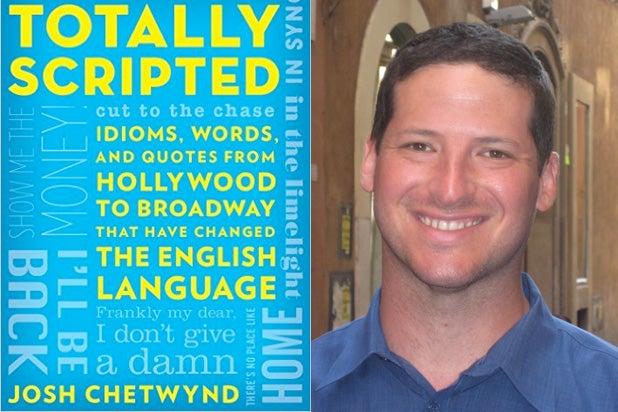 Show business has always understood the value of words. Whether on the silver screen, television, radio or the stage, writing is crucial to a production’s success or failure. “You struggle, you claw, and you scratch trying to camouflage a bad script,” the actor Gregory Peck once said. “When the script is sound and the structure is there, you just sort of sail through.”

Behind the scenes, the specificity of what’s said is every bit as important. When a 19th-century stage hand was told to make sure the star was “in the limelight,” he’d be in big trouble if he didn’t know what that meant. Similarly, a film editor in the early days of Hollywood would lose his job if he didn’t understand how to deftly “cut to the chase.”

Then there are the many studio execs, talent agents and publicity pros, who have intuitively understood how to bend language to their will since the dawn of the business. As an entertainment journalist for publications like USA Today and The Hollywood Reporter, I’ve often quipped that there are certain power players in the industry who could lie with moral indignation. If you question what seems like a tall tale, these Hollywood bigwigs become outraged. It’s as if they are saying, “How dare you question my lie? Do you know who I am? You should consider yourself lucky that I’m even lying to you!”

In 2016, The Economist magazine explained why it was relaunching a column on language in its print edition by saying, “Its power to inform and to lead astray, to entertain and to annoy, to build co-operation or destroy reputation, makes language serious stuff.” In the hands of the dream factories that produce entertainment, all those factors are not only in play, but, to paraphrase the film “This is Spinal Tap!” they also generally go to 11 on a scale of 1 to 10.

The reason: Everything is bigger in showbiz. Culture is America’s biggest export and what takes place in that industry is so often at the center of what is being sold. Quite simply, what happens in Hollywood does not stay in Hollywood.

That’s not to say show business’ impact on language is always over-the-top. Sometimes the industry’s linguistic choices enter the cultural bloodstream simply because, for better or for worse, we listen closely to the way Hollywood speaks.

For example, in the 1940s, the movie industry’s censors took a relatively obscure word, “cleavage,” which was primarily a piece of geological jargon for separating rocks and crystals (and sometimes used to talk political differences), and applied it as a euphemism for the often-ogled upper region of a woman’s chest.

This usage, which wasn’t meant for public consumption, was outed, so to speak, in 1946 when the industry’s chief censor, Joe Breen, found the low-cut dresses in the British movie “The Wicked Lady“ inappropriate for American audiences. The film was ordered to be edited, but the word’s new meaning, which was mentioned widely in the press, went global. Within two years, “cleavage” was so prominent that even a paper in the Canadian hamlet of Medicine Hat was referring to Rita Hayworth’s “cleavage” without having to explain what they were talking about.

To this day, films continue to subtly (and not so subtly) influence how we speak. When writer Lauren Duca penned an article in Teen Vogue that went viral on Donald Trump, she suggested he was “gaslighting” America (in other words, manipulating facts to make the electorate think they were going crazy) — referencing the 1944 Ingrid Bergman-Charles Boyer film “Gaslight,” which utilized that plot. That said, the phrase may have not ultimately gained wide traction as a psychology term if not for television writers, who used it as a term for comedic bits and kept it in the public consciousness, beginning in at least 1952 with “The George Burns and Gracie Allen Show.”

Still, when producers know they have a good line that will resonate, they will fight for it. Consider, “Frankly my dear, I don’t give a damn.” Censors wanted to cut the “damn” out of Rhett Butler’s famous final line and have it replaced with something like “I don’t care.” But “Gone With the Wind” producer David O. Selznick would have none of it. He fought the Hays Office and ultimately prevailed.

While Hollywood lore claims he was fined $5,000 for using “damn,” there is no known evidence in Selznick’s or the production code’s archives to support that ever happened. Even if he did pay a fine, his first thought was probably: “Frankly my dear…”

Josh Chetwynd is the author of "Totally Scripted: Idioms, Words, and Quotes From Hollywood to Broadway That Have Changed The English Language," which was released February 1, 2017 by Lyons Press. He covered the entertainment industry for USA Today and The Hollywood Reporter, twice winning Los Angeles Press Club awards. "Totally Scripted" is Chetwynd%u2019s seventh book. In 2015, his work "How the Hot Dog Found Its Bun: Accidental Discoveries and Unexpected Inspirations That Shape What We Eat and Drink," charted on the New York Times best-seller list. His 2011 book "The Secret History of Balls: The Stories Behind the Things We Love to Catch, Whack, Throw, Kick, Bounce and Bat," was named an NPR best book of the year.