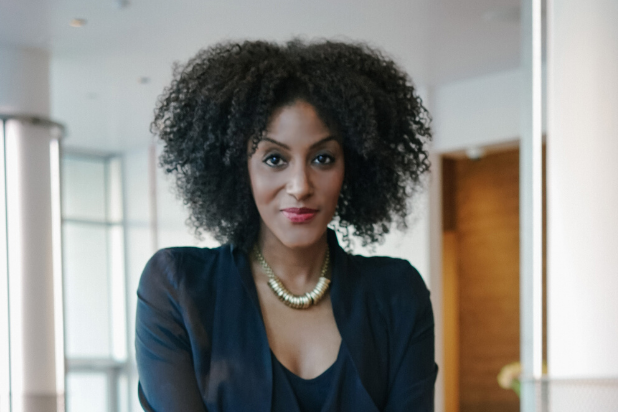 Leave it to Hollywood producer and actor Sarah Jones to combine improv, comedy and current events. Known for her one-woman multi-character stage shows, the Tony award-winning writer and performer is bringing her favorite characters to life to discuss what it means to be Black in America on her new Instagram Live series “#YesImSarahJones.” New episodes of the show are released every Wednesday on Sarah’s Instagram @yesimsarahjones.

“I hope Hollywood wakes up to the reality that it has been an engine of white supremacist ideology since D.W. Griffith,” Jones told WrapWomen, referring to the early-20th-century director of films like “Birth of a Nation.” “If the industry really wants to show it believes that Black Lives Matter, studios are going to have to reckon with the voices they’ve been marginalizing, including all of mine.”

During a recent interview with WrapWomen, Jones — who has performed several times for Barack and Michelle Obama — opened up about her inspiration behind the new series, the emotional journey of filming it and what it’s like combining current events and comedy.

Tell us about “#YesImSarahJones.” How is this different than other projects you’ve done in the past?
For starters, I’m new to using Instagram as a platform, so there are huge advantages, like reaching 200,000+ people in one swoop, whereas on Broadway I could only reach 600 people on a sold-out night. I also get to improv, focus on comedy and share about current events in real time. It’s engaging directly with the audience in a totally new way.

Can you describe some of the characters on your show?
If people have seen my TED talks or my live shows, like “Sell/Buy/Date,” they’ll recognize the characters in #yesimsarahjones show. Every week, you get to hear what’s happening for them, as opposed to a set script. They range from an elderly Jewish bubbe to a feminist college student with vocal fry, to a Black male ex-rapper — and many more.

What has the filming process for “#yesimsarahjones” been like for you personally?
It’s been a cathartic experience, especially since I was first inspired to “greenlight myself” in the wake of my own network show never getting to air. The development, shooting, everything about that process was pretty nightmarish, in part due to the white supremacy we’re all talking about now. So, in a way it’s been a blessing — the characters and I get to be rawer than ever before, and its emotional terrain for me every time — hopefully for the audience, too.

Also Read: Ivirlei Brookes on What It Means to Be an Ally and How to Talk to Your Kids About Race

What have you learned from this project and what has been the overall feedback? Have you received any messages that really stuck out?
Doing my own show independently sets me free from TV executives or agents telling me what I can or can’t say, how I have to be “packaged,” etc. I get to stop feeling like an item out for Amazon delivery and start feeling like an artist again. As for feedback, it’s been phenomenal — there’s something so satisfying about the support not only from the audience but also fellow independent-minded artists, from Gabrielle Union to Busy Philipps to Billy Eichner.

You come from a mixed-race family. How are you using this show as an opportunity to connect with both sides?
It’s true that my background — growing up with a mom with white privilege in a multicultural family and community — has always given me more of a sense of empathy for a range of people. That said, I’m holding white folks, whether fans, friends, or family members, to a higher standard than I ever have in terms of anti-racism and asking them to do their work — and I think it’s long overdue.

What can white people and non-Black people of color do to support the Black community and help amplify Black voices?
First of all, don’t give up, even if change doesn’t seem to be happening fast enough. It’s taken Black folks 400 years to get to this new point of progress where white/non-Black POC allyship is a real thing. So we can’t lose steam after four weekends or even four years of doing the work. We probably won’t see the end of white supremacy in our lifetimes, but it’s still worth every messy step we’re taking now.

What advice do you have for people looking to break into the industry?
To anyone being told Hollywood “doesn’t know what to do with you,” stop waiting. Greenlight yourself.