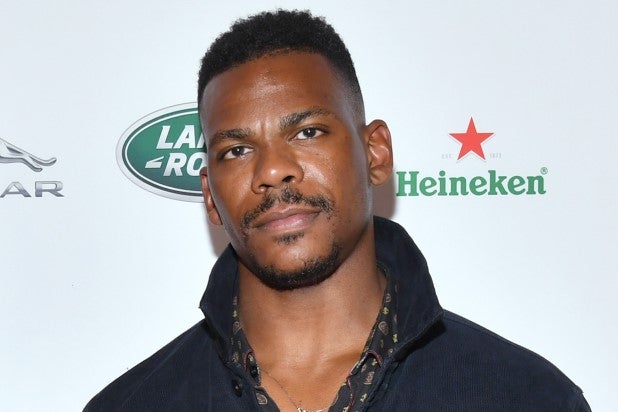 Long before he became one of the hottest stars in Hollywood, Michael B. Jordan (“Creed,” “Black Panther”) won raves for his portrayal of the complex Dillon Lions quarterback Vince Howard on the acclaimed NBC drama “Friday Night Lights.” His character’s scrappy, inspiring journey from a troubled family to a triumphant success story was not lost on Jon Alston, an NFL linebacker-soon-to-be-filmmaker, who was traveling a rocky road of his own.

So a decade later, when Alston’s award-winning short film “Augustus” was selected for the recent Social Justice Now Film Festival — where Michael B. Jordan serves as co-ambassador — the coincidence was, well, a touchdown. Jordan’s films “Just Mercy” and “Fruitvale Station” opened the Festival at the Paramount Drive-In Theater, kicking off a slate of virtual screenings that explored themes of racial inequalities.

Alston played college football at Stanford before being drafted by the St. Louis Rams in the third round of the 2006 NFL draft. After five seasons of playing for the Rams, Oakland Raiders and Tampa Bay Buccaneers, Alston retired when he sustained four concussions in less than one year.

He then decided to pursue his true passion: film. Alston poured his savings into making his first feature film, “Red Butterfly,” a romantic drama that premiered at the St. Louis International Film Festival in 2015.

Encouraged by positive reviews, Alston left behind the life of a pro athlete for good. He enrolled in USC Film School and studied filmmaking. It was quite an abrupt change.

“Red Butterfly was costly; I gave up everything I had to complete it and to really invest in the transformation from athlete to filmmaker,” Alston explained to TheWrap. “I wrote the pilot that got me signed while my apartment in St. Louis was in foreclosure. Then I went back to college in 2016. I slept in my car for two weeks until I could get student housing, as I couldn’t afford anywhere else to stay. I did well in school. Then I moved to L.A. for grad school [USC School of Cinematic Arts] and slept on my best friend’s couch for months.”

Hard work in film school meant that Alston wouldn’t be destined for couch-surfing too long: his talent, football experience and acclaimed debut with “Red Butterfly” led him to a screenwriter gig in the writers’ room on the Greg Berlanti-produced CW series “All American” while he was still in film school.

Also Read: Michael B Jordan and Color of Change Aim to #ChangeHollywood With Investment in Black Stories and Talent

A visually stunning and emotionally riveting dreamscape, “Augustus” won Directorial Discovery Grand Prize at the Rhode Island Film Festival and earned multiple wins at the St. Louis Filmmakers Showcase. It is a finalist at the Martha’s Vineyard African American Film Festival (Academy qualifier) and an official selection in the Diversity at Cannes Short Film Showcase.

Augustus chronicles Frederick Douglass’s (writer/actor Ayinde Howell) wrenching choice to stand up for his rights, as he imagines a future United States in which slavery evolves into systemic racial injustice. Trayvon Martin, Emmet Till and Michael Brown haunt and reverberate through the film. Augustus is empowering in its struggle for freedom, justice and Douglass’s personal integrity, and inspirational in pursuit of education: “My education,” says Douglass, “is my salvation.”

Alston’s inventive camera fluidly dissolves the present and the past (Douglass describes his dreams as “always the same; I see our people in the same struggle – I can never save my son.”) Alston has an exceptional eye for framing his dream sequences and a strong, distinctive POV.

He explained that his goal is to illuminate for viewers “the importance of equal rights and the truth of what justice means.”

Alston is currently adapting the Oscar-nominated 2019 documentary “St. Louis Superman” about Ferguson activist Bruce Franks, Jr. who became a state representative in 2016 for the screen. “Augustus” has also been selected for the upcoming Oscar-qualifying HollyShorts Film Festival, which runs virtually from November 9-15.

Augustus can be viewed here.