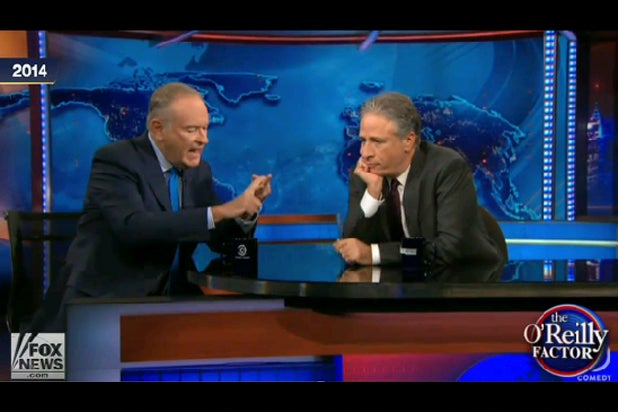 As Jon Stewart’s “Daily Show” run draws to a close on Thursday, there is one of the host’s favorite foes that should be concerned: The TV News industry.

Stewart has elevated the news biz more than any other entertainment personality over the last two decades and now the industry’s biggest marketer is closing shop.

“I think Jon Stewart leaving The Daily Show is a loss for anyone who laments the lack of journalistic integrity on most of the cable news networks,” Scott Blakeman, political comedian, told TheWrap.

Blakeman, who’s appeared on Fox News and MSNBC over the years, points to the large impact Stewart has had on making cable news not just a news vehicle, but platforms with larger than life personalities who need to be kept in check.

“In recent years the show insightfully and hilariously skewered the dumbing down of cable news, as well as the wildly inaccurate ranting of Fox News. While Fox was a prime target of the show’s satire, Stewart took aim at CNN and MSNBC as well, in addition to local and national broadcast news.”

The most high-profile cable news foe of Stewart’s was Bill O’Reilly, who Stewart mocked, spoofed and condemned as if it was a competitive sport over the years. Sean Hannity, Megyn Kelly, and Glenn Beck also got the Stewart treatment, which included calling these personalities out for hypocrisy and misplaced self righteousness.

Without him being a one-man marketer for them, there’s a potential drop-off in the collective consciousness.

“Stewart kept the Fox News brand in our consciousness where we could respond in any way we would like,” marketing expert John Tantillo told TheWrap. “This kept the brand relative and fresh.”

Stewart’s successor, Trevor Noah, has already demonstrated that he’ll shy away from the typical Daily Show TV news frenzy, instead opting to poke fun at the digital space, spoofing sites like BuzzFeed and Gawker.

“By Noah suggesting he’ll do less of that, it could damage his brand,” Tantillo continued. “He’s trying to differentiate from Stewart, but you know what producers will say: “Things aren’t edgy enough, maybe you want to throw a bomb at O’Reilly.”

Stewart’s bombs have in turn created plenty of fodder for TV news hosts, many whom included sound bites of him tearing them apart on their shows. Without him, liberals won’t have nearly enough daily ammunition to go against Fox News; viewers of all stripes won’t have the chronological, video tape evidence when CNN is going off the wall over missing planes, or when MSNBC is carrying water for President Obama.

More importantly, an industry built on older viewers and departing young ones, will instantly become much less of the zeitgeist.

Which says more about Stewart than Bill O’Reilly, missing planes, or MSNBC.