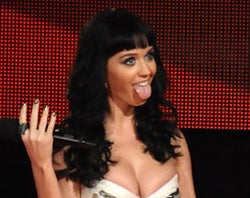 So, naturally, the two would eventually come together.

On Thursday evening, they did, when Perry asked her 1.7 million followers the following question:

“[I]s it normal to have the reacurent [sic] rash with blisters on my vagina???”

“It was an unusual dispatch,” MTV’s newsroom blog noted, but “no more unusual than anything else that she unleashes.” (This is, after all, the same Perry who shot down pregnancy rumors by tweeting, “That’s right I’m bleeding.")

It’s unclear whether or not the tweet about Perry’s naughty bits was the work of one of her studio producers, Lukasz Gottwald, whom Perry later revealed had hijacked her Twitter account.

No matter. The cat was already out of the bag.

"Let’s get Katy Perry’s vagina to #1 y’all!" Perez Hilton tweeted, firing off a series of tweets related to Perry’s nether regions and urging his own 1.7 million-plus followers to do the same.

It wasn’t long before Perry’s vagina became the top-trending topic on Twitter, briefly ousting the incredibly-hyped iPad for the day’s social networking honor.

Gottwald’s response to Perry: “I told you I make number ones biatch!!!”