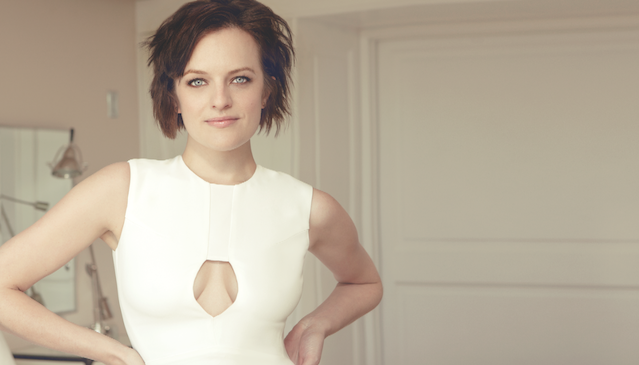 At 30, Elisabeth Moss has found the kind of rich professional achievement that is rare in careers twice as long.

Having started acting at age 5, and with a regular role on "The West Wing" as a teenager, Moss finds new range this year as the lead of "Top of the Lake," the Jane Campion-directed, multi-part thriller on the Sundance Channel.

Sitting down to chat on the day after wrapping the next-to-last season of "Mad Men" — whose final episode aired Sunday night on AMC — the actress talked about the excitement of setting aside staid Peggy of the 1960s to become Robin, the tough, unyielding detective hiding a horrific secret as she investigates a missing girl in a remote lakefront area of contemporary New Zealand.

Let’s talk about "Top of the Lake," since it’s a big step for you as an actor — you are really the heart and soul of this thing.
I suppose it’s the first time I’ve been No. 1 on the call sheet. I frankly just had so much to do — I was working, I think, 65 or 66 days out of 82 shooting days, and 50 of those days were in a row. So it was definitely a bigger venture for me than I’ve ever done. It’s so beautifully shot, and it feels like you were completely somewhere other.
We were in Queenstown, which is on the South Island in New Zealand. To be able to actually go to New Zealand and be in Jane [Campion]’s home country and her environment was really important.

And nothing will pass for New Zealand. It’s the most beautiful place that I’ve ever been to…It’s stunning. It’s this crazy combination of mountains and lakes, and parts of it look like Southern Italy. There’s vineyards, and, I mean, it’s just so beautiful.

At first you play a character with a very even temper, but I love how the character is revealed little by little, layer by layer.
Well, one of the things Jane said to me in the very beginning, before I actually auditioned which I really appreciated was, “I know that you can do vulnerable. I’ve seen that. I need to see that you can cover it up.” And I completely understood that request, because I frankly needed to see if I could do that as well.

And once I got the role and we continued to talk about it, one of our most important things was to cover it up as much as possible in those first few episodes so that there was that reveal, that breaking down of the character. We allowed her to start shedding the layers. How did the project come to you? You said you auditioned, so…
As soon as I heard it was Jane, I wanted to be involved. The opportunity for an actress, especially my age, to go and work with her is something you do not pass up.

So I read the first two scripts, and I thought that they were so unique in the sense of they had that detective through-line, the kind of mystery-story base, but then went in a totally different direction and got very Jane Campion and weird. [laughs] I’ve played Peggy for six years, and this is very much a stretch for me. This character, it’s very different.

I think the story goes that Jane said, “I love Elisabeth Moss, and I love "Mad Men," I love Peggy, but I don’t know if I can see her in this role.” And I totally understood. The casting director Kirsty McGregor and my agent Esther Chang were incredible at pushing a little bit and making sure that she saw me. And to her credit, she was open and sort of trusting.

Did you go over there to audition, or did you do a tape?
I met with the casting director. Then I got on the phone with Jane. And then we put three scenes down on tape with the casting director and sent it to Australia, and that was pretty much it. I had to do a little accent test. I obviously went to a dialect coach and stuff. But then I recorded it myself.

You recorded yourself?
Yeah. I put the camera on a coffee table and sat on the floor and fixed the lighting and took out a light bulb and made sure it looked nice, and I sent it off and went to dinner. The next night I got a text from Jane that basically was like, “You’re my Robin.” Occasionally someone is open and trusting and gives you a chance to show that you can do something different. It’s hard to find that sometimes as an actor when you want to try different things. And so I’m forever grateful to her.

What did you do in the audition? You must have really nailed it.
Apparently! Yeah, I guess so. Jane said the most amazing thing to me, she said, “You don’t have to hit the bullseye, just get the dart on the board.” And I will never for the rest of my life forget that she said that, because as an actor it just liberated me.

Auditions are so weird. You feel like you have to go in and present your thing, and you haven’t even talked to the director, haven’t rehearsed, you just have this script. I kind of gave a sketch of what I thought Robin was, and I did three scenes. One of them is my favorite scene in the project, which is a dinner scene with Al [David Wenham], when I’m talking to him about the rape.

Your character thinks she's hiding the secret that she was raped by a group of men as a teenager, but in that scene she learns that everybody knows about it…
Yeah, and she says, “F— the truth.” I just fell in love with that speech. Then three months later I went to New Zealand. I hadn’t even met Jane yet.

After having done this role, which is physically challenging, and a different culture and an accent, do you feel like you’re a different actor on the other end of it?
I do, absolutely. I learned so much, which sounds so cheesy but it was like an acting Olympics. [laughs] I learned honestly what I need as an actor and who I am as an actor, because I don’t think there is any right way to act, I don’t think there is any right way to play a scene or play a part. I felt like I learned so much about my own instrument, so to speak, and became a lot stronger.

In what ways?
I never really went to any acting school or anything, so I’m not very good at the nomenclature of acting. But I suppose I learned to know when it’s there and it’s not. To know when to not think about it, and when to do a bit more work on it and spend some time with the scene. And then times when it’s there, and don’t fucking touch it. Like that dinner scene with Al–that was actually directed by Garth Davis, who I feel doesn’t get mentioned enough.

He directed three of the episodes. We never spoke about it; we never rehearsed it. We would go through the script and skip that scene. We just knew that it was there and I knew what it was and couldn’t touch it. And then there were scenes that didn’t work, and we had to talk about them and rehearse them and improve.

It must be great for you, because on "Mad Men" the main emotional weight is not on you.
Yeah. And also, the acting on "Mad Men," I always feel like the style of it is very specific. It’s very subtle and it’s very minimal. And this was yelling and screaming and crying and being aggressive and being tough. That was something that I had to work on.

I’ve been wanting to ask you: You’ve been an actor since you were 5 or 6. Why do you like it?
I don’t know. I really don’t. It’s like, why does someone like playing music, or being a painter, being a writer? It’s just something that gives you pleasure. The joy that someone would get from playing a beautiful piece of music or painting or dancing and whatever it is, I get that weird same joy and pleasure when I’m acting. To me, showing human truth is really interesting, and tapping into emotions–I find it really fun.

You have one more season of "Mad Men," then it’s over. Are you feeling sad about it?
It’s bittersweet. It will have been seven years. That’s a great run. But what I just keep thinking about is the last time that they say “Cut” and call, “Check the gate,” and that’s the last time I will ever play Peggy. That, to me, is so strange. That I will never open my mouth as that character again is so weird to me. I think I’ll probably just be sort of numb about it, and then it’ll hit me eight months later. [laughs]

Are you worried that there are not enough interesting female characters to go for?
I feel like that’s not so true anymore. I did one of those Emmy panels a couple of weeks ago, and it was Connie Britton, Anna Gunn, Kate Mara, Monica Potter and Kerry Washington. And that’s only four of the amazing women, y’know what I mean? There’s so many amazing female parts out there right now.

I feel like I really arrived at the right place at the right time. I’m sure that it will always be more difficult, but I think that there is an incredible opportunity out there right now.