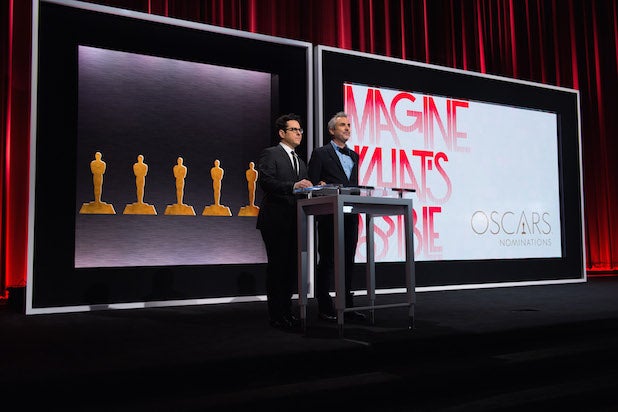 Oscars voting begins on Wednesday and runs for 10 days, until Jan. 8, with almost 6,300 voters eligible to cast ballots for the 88th Academy Awards.

But don’t worry, awards contenders: You don’t need anywhere near that many votes to land a nomination.

In fact, one of those coveted Oscars slots can be yours for as few as 20 votes — if you’re a costume designer. The only Academy Award categories in which you’ll need more than 100 votes for a nomination are Best Picture and the four acting categories.

Mind you, we’re talking about first-place votes here. Most Oscar categories are nominated using a preferential balloting system; voters rank their five favorites in order of preference, but their vote really only goes to the film ranked first on their ballot, unless that film has either secured a nomination or been eliminated from contention.

Because almost all Oscars nominations are determined by voters from a specific branch of the Academy, and because AMPAS is pretty particular about whom they let into those branches, the numbers that’ll land you a nomination are in many cases surprisingly low.

The basic rule is that you take the number of ballots cast in any category, divide by the number of nomination slots available plus one (usually 5+1=6), and round up to the next largest whole number; that’ll give you a vote count that guarantees you’ll be nominated.

Here’s the current Oscars math, based on the Academy’s branch counts for this voting year.

BEST PICTURE
This year, says AMPAS, 6,261 members are eligible to cast ballots. If they all vote — we know they won’t, but the accountants and the Academy say participation is very high — it would take 570 first-place votes to secure a Best Picture nomination after the initial round of counting.

But the process then uses the so-called “surplus rule” to reallocate ballots for films that had significantly more support than they needed, and it redistributes the ballots of voters whose first choices receive fewer than 62 votes to their second (or third, or fourth…) choices.

At the end of that redistribution (again, assuming full participation), any film with more than 5 percent of the votes, which equals 314 votes, would be a nominee.

BEST DIRECTOR
The Directors Branch currently contains 394 members, which means the magic number for a nomination is 66 first-place votes.

Also Read: What Does It Take to Vote for the Oscars?

ACTING AWARDS
Although its membership has fallen slightly for three consecutive years, the Actors Branch remains by far the largest of the Academy’s branches. If all of its 1,138 voting members participate, it’ll take 190 votes to secure a Best Actor, Best Actress, Best Supporting Actor or Best Supporting Actress nod.

BEST ANIMATED FEATURE
There’s no magic number in this category. Nomination voting is done by volunteer members of the Animated Feature Film Award Screening Committees, a group whose membership is typically a mixture drawn from the 401 members of the Short Films and Feature Animation Branch and others from across the Academy.

Members of the committees must see 66 percent of the eligible films — this year, 11 out of 16 — and score each film on a scale of 6 to 10. The movies with the five highest scores are nominated, provided they each average at least 7.5.

BEST PRODUCTION DESIGN
With a 278-member branch, the magic number is 47.

BEST DOCUMENTARY FEATURE
A first round of voting narrowed the field from 124 eligible films to a 15-film shortlist. A second round will narrow the 15 films down to five nominees. If everyone in the 237-member branch votes in this second round, the magic number is 40.

BEST DOCUMENTARY SHORT
Unlike the doc-feature category, the doc-short category still uses committees within the Documentary Branch to score the contenders and narrow the field to 10. Members of the branch are then eligible to vote for the nominees using the preferential system, which would make the magic number 40 if they all voted. (Which is unlikely.)

BEST FILM EDITING
The branch contains 254 members, so the number is 43.

BEST FOREIGN LANGUAGE FILM
There is no specific branch governing this category; instead, volunteers from all branches of the Academy (the “general committee”) participate in a first round of voting that helps narrow the field down to nine shortlisted films.

The weekend before Oscar nominations, the shortlist will be narrowed to five nominees by 10 randomly chosen members of the general committee and 30 hand-picked Academy members in Los Angeles, New York and London, who will view all of the shortlisted films and vote.

BEST MAKEUP AND HAIRSTYLING
Members of the branch who can attend a meeting have already narrowed the field down to seven. (At least 15 voters must have attended the meeting.)

If all 141 members have seen all seven shortlisted films and opt to vote, which seems highly unlikely, the magic number would be 24.

BEST ORIGINAL SCORE, BEST ORIGINAL SONG
The Music Branch is made up of 257 members, so 43 of them are enough to guarantee a nomination for songs or scores. (Members of the branch will also receive a DVD containing three-minute clips of each of the eligible songs, and they’re asked to view those clips before voting.)

BEST LIVE ACTION SHORT, BEST ANIMATED SHORT
Volunteers from the 401-member Short Films and Feature Animation branch have selected 10-film shortlists in the two categories. Members of the branch who see all the shortlisted films are eligible to score each film on a scale of six to 10, with the top five films scoring higher than 7.5 becoming nominees.

If fewer than five films score that highly, the category can have as few as three nominees.

BEST SOUND EDITING, BEST SOUND MIXING
The 437-member Sound Branch is the second-biggest among the branches that nominate their own awards. (The Executives and Producers Branches are bigger, with 458 and 483 members, respectively, but their members only vote to nominate Best Picture.)
The magic number for the two sound awards is 73.

BEST VISUAL EFFECTS
The 359-member Visual Effects Branch’s executive committee determined a 10-film shortlist, and all members of the branch are now invited to a Jan. 9 screening of excerpts from the shortlisted films, followed by a discussion with the visual effects artists responsible. At that screening, the 10 shortlisted films will be narrowed to five nominees using preferential voting.

If every single member of the branch happens to be in town and comes to the Academy for the screening, the number would be 57. But they won’t be, so the real number will be a lot lower.

We’ll know how all the math played out on Jan. 14, when nominations for the 88th Academy Awards are announced.