In wake of the violence over the weekend in Charlottesville, where counter-protesters clashed with white supremacists at a white nationalist rally, the Southern Poverty Law Center (SPLC) has unveiled its Hate Map. The organization monitors hate groups; this map shows the location of all hate groups in the country.

According to the Hate Map, there are currently 917 hate groups in operation in the U.S. While many of these groups are white supremacist organizations (white nationalists, neo-Nazis, neo-confederates and the Ku Klux Klan), the SPLC additionally includes black separatist groups (i.e. The Nation of Islam) in its roster. The SPLC also highlights distinctions between the different white power groups; most prescribe to a similar ideology of white supremacism.

The amount of press these groups have gotten since the Charlottesville incident, however, is arguably in steep disproportion to their sway and numbers. White power groups are still decidedly on the fringes of society, especially compared to the prevalence of religious groups that preach positivity and acceptance.

Still, the overall number of hate groups has steadily risen over the past few years. The SPLC reports “an explosive rise in the number of hate groups since the turn of the century, driven in part by anger over Latino immigration and demographic projections showing that whites will no longer hold majority status in the country by around 2040.” These numbers decreased from 939 to 784 from 2013 to 2014 but have climbed since 2014. 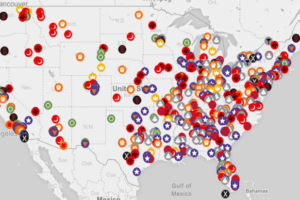 Though the map doesn’t give any indication of how many members each hate group has, it does give a breakdown of the number of hate groups in each state. Surprisingly, California hosts the largest number of hate groups, with a total of 79. Florida comes in second with 63, and Texas follows close behind with 55.

Also noteworthy is a spike in anti-Muslim sentiments. According to the SPLC, the total number of anti-Muslim groups increased by 197 percent from 2015 to 2016.

You can take a look at the full map here.