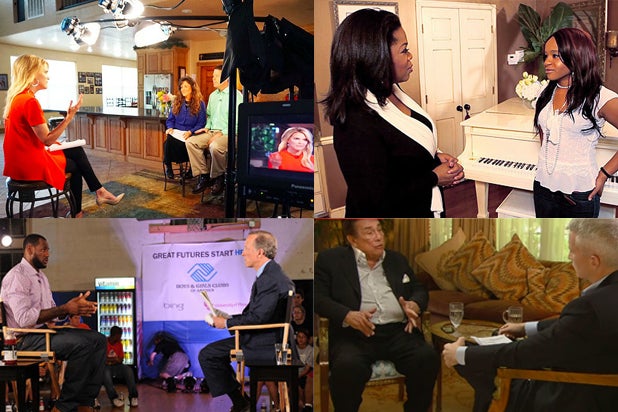 Fox surely has reason to be happy with the ratings for Wednesday night’s interview with the scandal-plagued family of  TLC’s “19 Kids and Counting.” The sit-down, which aired on “The Kelly File” as the reality-TV family grapples with a child-molestation scandal, hauled in 3.1 million total viewers.

That was the highest viewership of the year for Megyn Kelly’s show (but not for the show itself, which drew 7.3 million total viewer in November, on the first night of the Ferguson riots).

That’s nothing to sneeze at — but it’s not for the record books, either.

To gain a bit of perspective, TheWrap looked at the numbers for other high-profile cable interviews in recent years.

There have been interviews that have handily bested the Duggars sit-down.  For instance, LeBron James’ “The Decision” interview on ESPN in 2010 drew 9.95 million total viewers — even if more than a few of those viewers thought of it as a drawn-out ordeal of athletic narcissism.

And again pulled in big numbers with her 2013 interview with Lance Armstrong, during which he admitted to using performance-enhancing drugs during his professional cycling career. That confessional pulled 3.2 million viewers to OWN.

On the plus side for Wednesday’s “Kelly Files,” the Duggar interview bested Anderson Cooper’s CNN interview with disgraced Los Angeles Clippers owner Donald Sterling, which provided a big boost for “AC 360” but still drew in a mere 720,000 total viewers. (An interview with basketball legend Magic Johnson on the topic of Sterling the night after actually scored marginally better, averaging 725,000 viewers.)

The Duggars interview also handily beat out ‘s cable interview with Hollywood problem child Lindsay Lohan, which pulled in a relatively anemic 1.8 million viewers. It also topped Winfrey’s sit-down with Rihanna, during which she discussed her abusive relationship with Chris Brown. That 2012 face-to-face drew 2.5 million viewers.