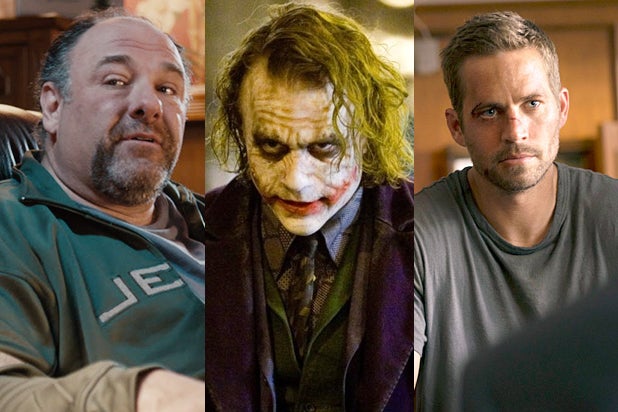 The late James Gandolfini’s final movie, “The Drop,” opens Friday, the latest in a sadly long list of movies with stars who died before their films opened.

Some have scored big at the box office, like “The Dark Knight” with Heath Ledger. Others, like John Candy’s Western spoof “Wagons East!,” tanked spectacularly.

Chernin Entertainment’s “The Drop” is directed by Michael Roskam and co-stars Tom Hardy and Noomi Rapace in a crime drama about mob money laundering in New York bars. Distributor Fox Searchlight has the film, which has a solid 76 percent “fresh” rating on Rotten Tomatoes, in roughly 500 theaters nationwide.

This isn’t the first of Gandolfini’s film to be released posthumously. Nicole Holofcener‘s low-budget romantic comedy “Enough Said,” in which the former kingpin on HBO’s “Sopranos”  starred opposite Julia Louis Dreyfus, was a critical favorite and an indie hit with $25 million domestically last year.

The late Philip Seymour Hoffman is currently appearing in “A Most Wanted Man.” The Oscar winner’s performance in the big screen adaptation of the John Le Carre spy thriller has drawn critical raves, and the indie film provided solid summer counter-programming, taking in $16 million since its July opening.

See photos: 22 Fall Movies We’re Dying to See – From ‘Interstellar’ to ‘The Interview’

He’ll also appear in the two next entries in “The Hunger Games” franchise, “Mockingjay Part 1” and “Mockingjay Part 2.” There are many examples of films with stars who died before their films’ releases.

Here are a few other actors who died before their films opened:

— “Brick Mansions” The last film completed by the “Fast & Furious” star was a French-Canadian urban action film co-written by Luc Besson. It opened softly in the U.S. in April but has taken in nearly $70 million worldwide. Expect “Fast & Furious 7,” in which Walker’s brother Cody will step in as a double, to do much, much better next April. “Brick Mansions” is just out on DVD and Blu-ray.

Heath Ledger — “The Dark Knight” The Aussie actor’s brooding presence as the villainous Joker permeated the second film in director Christopher Nolan‘s Batman trilogy, and earned him the Academy Award for Best Supporting Actor. The movie was a blockbuster, taking in more than $1 billion worldwide in 2008.

Heath Ledger — “The Imaginarium of Doctor Parnassus” The actor died while shooting Terry Gilliam’s fantasy, and his pals Johnny Depp, Jude Law and Colin Farrell all stepped in for him and the film was completed. It didn’t do much business in the U.S., but took in $60 million globally in 2009.

Oliver Reed — “Gladiator”  The hard-partying British actor died while drinking in a pub while midway through filming Ridley Scott’s sword-and-sandals epic. Using stand-ins and CGI, the film was completed and went on to make more than $450 million globally in 2000 and win five Oscars including Best Picture.

Bernie Mac — “Old Dogs” This was the third of the actor’s movies released posthumously, following “Soul Men” and the animated “Madagascar: Escape to Africa.” The critics wouldn’t throw a bone to “Old Dogs,” which starred Robin Williams and John Travolta, but it still made nearly $100 million domestically. The 2009 film was dedicated to Mac and Travolta’s son Jett, who had died months earlier.

John Candy — “Wagons East!” The comedian known for “Second City Television” and  movies like “Uncle Buck” and “Planes, Trains and Automobiles” died of a heart attack on the same night he filmed his final scene in the wild west comedy. Neither critics nor audiences were willing to saddle up, and the film bombed in 1994.

Brandon Lee — “The Crow” The son of martial arts legend Bruce Lee was killed when hit in the abdomen by a real bullet fragment that was pushed out of a handgun firing blanks in a scene from the film. Rumors that the fantasy horror film contained the actual footage of his shooting may have helped it become a $50 million hit in 1994 and it remains a cult favorite.

Natalie Wood — “Brainstorm” The “Splendor in the Grass” and “West Side Story” star was shooting the sci-fi thriller when she fell overboard and drowned while on a yacht with her co-star Christopher Walken and her husband Robert Wagner. Director and special effects whiz Douglas Trumbull rewrote the script and used a body double for Wood’s remaining scenes. Released by MGM nearly two years later in 1983, the film tanked.

Vic Morrow — “Twilight Zone: The Movie” An explosion on the set brought down a helicopter resulting in the death of the actor and two young children, who were later found to have been working illegally. The film was completed, but the controversy surrounding their deaths overshadowed it at the box office, and it topped out with less than $30 million domestically.

Bela Lugosi — “Plan 9 From Outer Space” The Hungarian actor famed for playing Count Dracula died while shooting the sci-film for schlock director Edward Wood, who finished the film with a stand-in who looked not even a little like Lugosi. The making of the film, christened “the worst movie ever” by pundits, was chronicled in the 1994 Johnny Depp comedy “Ed Wood.”