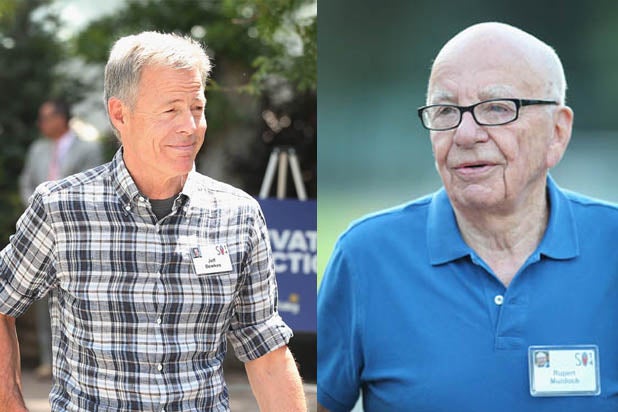 21st Century Fox’s $80 billion bid for Time Warner may be just the beginning of Rupert Murdoch’s courtship of the rival media heavyweight.

Analyst Tony Wible, who suggested the possibility of a merger in June, believes that Murdoch has got to dig deeper into his wallet if he wants to take over his rival. He is one of several analysts who believes Fox’s initial offer, which valued Time Warner at $80 a share, undervalues the owner of CNN, HBO and Warner Bros.

The company has recently slimmed down after spinning off Time Warner Cable and Time Inc., moves Wall Street believe made it more attractive for takeover.

“Now the question is a what price do you pay?” Wible told TheWrap. “It’s a fluid negotiation that happens in public. [Fox] puts in an offer, the offer is too low and Time Warner keeps shooting it down.”

A Fox spokesperson said there are no current conversations between the two media mega-corporations, and Bewkes indicated the same. In a video sent to employees, he said that the company’s board rejected the offer July 8 after concluding that Time Warner would create more shareholder value if the company continued to follow its strategic plan.

No one is buying that Murdoch that given up on a Time Warner deal — or that Time Warner would not be open to a different deal.

“We believe Fox will not go away and ultimately they will raise their bid to try to get the deal done,” MoffettNathanson analyst Michael Nathanson wrote in a note Wednesday.

Whether or not that new offer — or a even third company’s bid — will be enough to entice Time Warner is another story. Few believe a major technology company like Google or Apple will be interested in Time Warner, and several other potential suitors are engaged in deals of their own.

Those mergers would consolidate ownership of the pipelines through which consumers get their TV and streaming content; that would give conglomerates even more leverage in the perennial negotiation over carriage fees and distribution. Comcast would have 30 million video subscribers if its deal with TWC went through, while AT&T could have 26 million.

Fox’s bid for Time Warner could indicate a need to bulk up the content creators’ ability to negotiate against the massive distributor networks — as well as the desire to create a mega-network that joins Time Warner’s TV sports rights and cable channels with Fox’s new sports network and their own programming.

“When one side of the bargaining table gets bigger, the other side usually reacts,” Nathanson wrote in this note.

A merger would also surely provoke intense regulatory scrutiny. Fox, which recently spun off its newspaper and publishing holdings, is supposedly open to spinning off CNN to reduce overlap with Fox News. Wible argued a Time Warner-Fox deal would prompt other deals.

Though reports have suggested Google, Apple and Verizon could all try to buy Time Warner, analysts agree Fox makes the most sense.

“I don’t see somebody with the same magnitude of financial and strategic benefits,” Wible said.

Time Warner possesses some of the most valuable TV channels in the world thanks to HBO and Turner Broadcasting, which operates TBS and TNT. Those would complement Fox’s Fox News and FX, creating a constellation of channels that no cable provider could do without.

Fox would also gain the rights to Turner’s baseball and basketball rights, bolstering its efforts to extend its reach in sports. Fox launched Fox Sports 1, a cable channel, last year, and owns a bevy of regional sports networks.

Though the deal would also unify two movie studios, both companies derive the majority of their profits from the television business.

“Cable consolidation set wheels in motion, and there’s a ripple effect,” Wible said. “Honestly even this deal is a catalyst for other deals. If Time Warner and Fox have a disproportionate share o the pie that be spent on programming, others that don’t will feel more pressure.”