Spoiler warning: This article discusses the final scene of “Nomadland.”

John Ford’s “The Searchers” was released 65 years ago, but the Western starring John Wayne continues to be a major influence on the theme and visual styles of movies today. The film, which follows Wayne’s Civil War vet Ethan Edwards on an obsessive Homeric journey to save his kidnapped niece, is an essential favorite of Martin Scorsese, Steven Spielberg and TV shows like “Breaking Bad.” Paul Greengrass screened it before embarking on “News of the World.”

And while making “Nomadland,” director Chloé Zhao and cinematographer Joshua James Richards were moved enough by the impact of “The Searchers” that one of the final shots in the film is a direct, deliberate homage to Ford’s classic.

“Nomadland” depicts about a year in the life of Fern (Frances McDormand), a widowed Nevada woman who lives a nomadic life from inside her van. In the wordless sequence that concludes the film, Fern returns to the northern Nevada town of Empire, from where she fled after the death of her husband and the 2008 economic crash.

Also Read: How 'Nomadland' Cinematographer Survived a Scorpion Bite and 'The Crud' to Shoot Oscar Favorite

“During our first film scout of Empire during preproduction, that sequence was pretty much completely mapped out,” Richards told TheWrap. “It was just Chloé and I together and we took a small camera and shot a version of how it would look.”

Zhao and Richards met while studying film at New York University. He points out that their threading of cinematic influences benefit from careful premeditation.

“We’re both fascinated by the American West,” Richards said. “It stirs our imaginations. When it comes to the landscape, you feel it before you understand it. And we’re always considering those old western images. It’s often a woman, silhouetted in the doorway. That image is very grounded in a classic language of cinema, which Chloé and I are always excited to be in dialogue with.”

Citing John Wayne’s character in “The Searchers,” Richards continued, “Ethan Edwards is the hero of that film sort of like Fern is the hero of our story. He’s the cowboy who drifts in the wind. And at the end of ‘The Searchers,’ he stumbles out into the landscape as the door closes. But in our film, Fern goes out and the camera stays behind, looking at that little gate, which sort of says everything about American domesticity. This is the world which she’s left. But it’s not the end.” 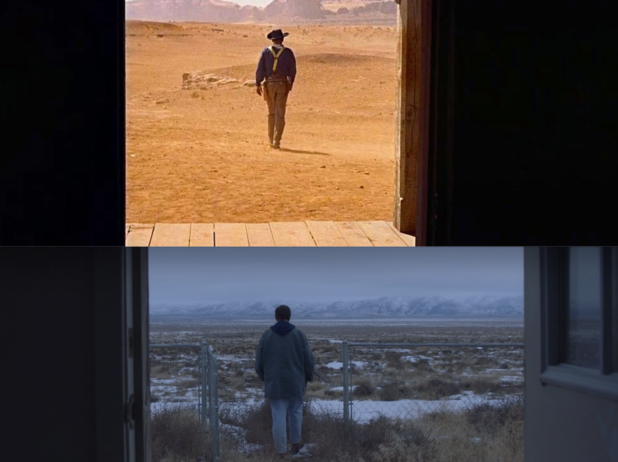 Indeed, as the film’s editor as well as its director, Zhao experimented in the cutting room with versions of “Nomadland” that did end with that shot of Fern walking away from her home in Empire. Eventually, however, she decided to add one final shot Fern’s van on the road, chugging ever forward.

“Chloé felt like the film needed to return to van before we said goodbye to Fern,” Richards said. “So that there’s something hopeful about Fran’s journey continuing. As an audience member, watching the film, I’m grateful for that last little glimpse.”

Richards, an odds-on favorite for an Oscar nomination for his lensing of “Nomadland,” also cited McDormand and her husband Joel Coen (of the Coen Brothers filmmaking fame) as artistic touchstones for the film.

“There’s a specific way Chloé hones in on the locations she shoots in and the feel for the place. I think it’s something she learned from Fran and Joel. You think about the specificity of the locations in a movie like ‘Fargo.’ It’s so precise. And we thought about that. You may never have heard of Empire, Nevada. It’s not the Grand Canyon, after all. But there’s something even more universal about that doorway and that gate in Empire. It’s a place of recognition.”