Serbian film director Ivan Ikić went into the two-month shoot scheduled for “Oasis” knowing he could only find the authenticity he wanted by casting non-actors to portray young people caught up in a joyless love triangle as residents of a Serbian institution for individuals considered intellectually challenged.

What Ikić did not know was whether that approach was actually going to work.

“My fear was concentrated from beginning that we will fail in one moment,” Ikić said in a conversation with TheWrap’s Sharon Waxman. He feared that during a two-month shooting schedule his inexperienced cast members might become “oversaturated” with the filming process, and the resulting loss of focus would negatively affect the roles they were portraying. 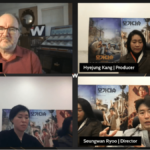 Instead, Ikić found the opposite. “It was completely different, actually,” he explained. “They gained more techniques and skills during the shooting… after awhile they were behaving as any other actor on the set.” There are a few professional actors in the cast but the lead roles of Marija (Marijana Novakov), Dragana (Tijana Markovic) and Robert (Valentino Zuni) were portrayed by real-life residents.

“Oasis” is Ikić’s second feature after 2014’s “Barbarians,” a film set in the post-industrial landscape of Mladenovac, a suburb of Belgrade, in the run-up to the 2008 protests that gripped the country after Kosovo declared independence.

In “Oasis,” Ikić explores another bleak landscape, the world of the residents of the facility, where they were not allowed to leave without an escort. Ikić describes the institution, still in existence, as a throwback to an era when such institutions were common in many countries, including the U.S., in the 1960s and 1970s, though most were phased out by the 1980s.

The filmmaker said he became familiar with the institution, located in Belgrade, Serbia, Yugoslavia, when a representative of the residence came to the film academy where he was studying and asked for volunteers to shoot and record a sporting event at the facility, more than 15 years ago. Ikić went, and continued to visit in the ensuing years, developing his interest in making a film there.

Ikić said that the film had a somewhat erratic shooting schedule because each of the actors had a different attention span and level of perceptual focus. However, he insisted that audiences should know the movie did not rely on improvisation. “It was really strict… I wrote almost all the dialogue before the shooting, it was not part of any kind of improvisation,” Ikić said.

Added Ikić, “Since the beginning I wanted them to play the roles, not to play themselves, (which is) much easier to do. I tried to teach them acting. I used basic technique of acting, which for any actor is common… but I modified, especially for them and their disability.”

Ikić noted that as the movie has entered the festival circuit it has opened discussion on some of the difficult issues addressed in the film, including suicide. The film, he said, has also “opened some very sensitive topics about the institutionalization of the people with intellectual disabilities — which could be in the future somehow opens up space for new new ways of how to deal with the situation.”