Pretty much any time a video game or tech product is a breakout hit — and definitely whenever it’s a huge blockbuster smash hit like “Pokemon GO” — a very predictable thing happens: a bunch of other companies try to rip it off in hopes of claiming a piece of its audience.

But they almost always fail, because these companies don’t understand what made the product work in the first place. And as everybody scrambles to churn out their own “Pokemon GO” I can already see the bloodbath that’s on the way.

“Pokemon GO,” if you’ve missed out on the madness, is an “augmented reality” game for smartphones in which players walk around in the real world in order to find Pokemon (short for “pocket monsters”). When they encounter one, the app will put the Pokemon in the real world on their phone screens, via the phone’s camera (this is what’s meant by “augmented reality”) and players can capture it by chucking Pokeballs at it.

It’s a social experience as well. A lot of people play with friends, roaming the streets together in their quest to “catch ‘em all,” as the Pokemon franchise’s tagline says. It feels like everyone’s getting in on the fun, turning the first week of “Pokemon GO” into a legitimate event.

The first thought that’s going to go through the minds of tech nerds the world over when they play “Pokemon GO” for the first time is something like: “I can make a better augmented reality game than ‘Pokemon GO.'”

And, yes, they’re probably right. That doesn’t mean it’s a good idea to actually make one.

We’re headed for a rush of AR games nonetheless, because nobody gets why “Pokemon GO” is a pop culture event. So before we really delve into why the imminent glut of augmented reality is going to destroy a bunch of tech startups and game studios, let’s talk about why “Pokemon GO” is A Thing. There are four main reasons.

First: It’s Pokemon. The people who have all the money will probably look straight past this, even though it’s the only reason anyone even cared about downloading it, because they aren’t in the demographic that cares about Pokemon. The appeal of Pokemon is very much a generational thing. If you didn’t grow up with Pokemon — meaning you’re more than 35 years old, roughly — Pokemon just does not register except as a weird thing kids like.

As humans, we tend to mentally brush off anything in pop culture we don’t find appealing, and consequently we end up carrying around this assumption that things we don’t like are less popular than they really are. With the appeal of Pokemon being limited mostly to Millennials and Generation Z, older people will be prone to consider the Pokemon part of “Pokemon GO” to be incidental.

But it’s not! “Pokemon GO” only became a big deal because basically every Millennial who likes Pokemon (there are a ton of them) downloaded it as soon as they could. Their play was necessarily very visible, and the myriad social hooks made the audience for “Pokemon GO” grow out from there very quickly. But without that initial rush — which should be credited entirely to the power of the Pokemon brand — none of this madness would be happening.

Second: It’s the first ever Pokemon game for smartphones. Nintendo has always been resistant to making its games available on mobile devices, instead preferring to promote its hardware. It’s understandable, in a way — why put out a Pokemon game for phones when you can browbeat nerds into both buying a $200 gaming system like the New Nintendo 3DS and $40 games? Whether Nintendo liked it or not, however, The Pokemon Company decided to just do it, and they had San Francisco-based studio Niantic Labs put “Pokemon GO” together.

Third: Accessibility. Gaming is often considered to be an activity for children because so many people play a lot of games when they’re kids but then the habit fades as they get older and they’re less inclined to blow all their free time and disposable income on video game stuff. Gaming is expensive and it’s a huge time sink.

Also Read: Pokemon GO Users Wonder If the Game Could Be a Government Conspiracy

But everybody’s got a smartphone, and everybody also has the zero dollars required to play “Pokemon GO.” Thus, lots of folks who enjoyed Pokemon games as a kid were suddenly able to bask in the warm glow of Pokemon nostalgia. So that mad rush at the start was greatly bolstered by these sorts of people.

The accessibility of a free-to-play smartphone game also is why the social angle worked so well. Video games don’t become a big deal in the greater pop culture only by delivering a product to gamers — they have to draw in other people, and “Pokemon GO” has done that. My mom certainly doesn’t play video games, but she’s done a little bit of Pokemon hunting the last few days just because she wanted to see what the deal was with this thing everybody won’t shut up about. And, more importantly, because there was no barrier of entry for her. 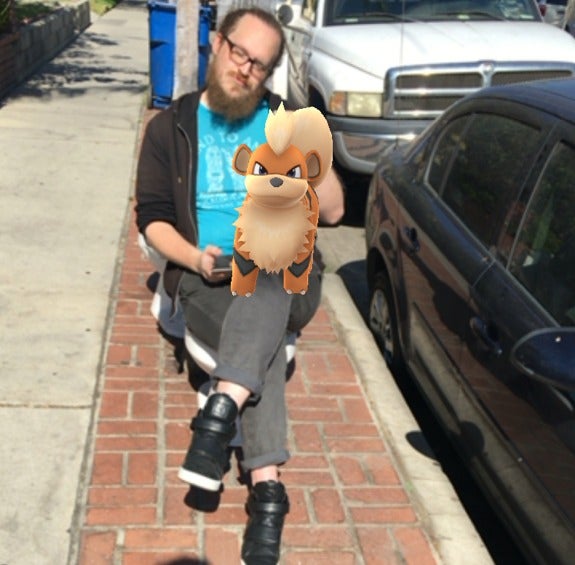 Or you could even just go to happy hour at a bar or restaurant that has a Pokestop in it, as my friends and I did on Sunday, drop a lure and watch the Pokemon roll in — so you can participate even just as you do what you normally do. The point is: You spend time with your friends and/or family and make some memories and everybody has a good time.

In fact, the very people who made “Pokemon GO,” Niantic Labs, already had a similar-but-unbranded AR game called “Ingress” that never made much of an impact. That game was more of a proof of concept, though — something to use to pitch the technology that ran it. “Pokemon GO” uses that tech to great effect, as we all can see. It’s a natural marriage, because the core hook of “Pokemon GO” is the same as the core hook of the more traditional Pokemon video games: go out there and find Pokemon. And the in-app purchases are mostly geared toward facilitating that search.

Other hugely popular brands won’t translate nearly so well, and there are maybe a handful of brands that Millennials feel as strong a connection to as Pokemon. You’d be hard pressed to find any major entertainment property to that both works this neatly as an AR game and has that sort of connection.

Here’s the thing about augmented reality: nobody cares. Augmented reality isn’t new — the tech sector has been pushing it for years. Remember Google Glass? Currently, Microsoft has its own AR system, HoloLens, in development. The idea is you wear these dumb glasses and the lenses project a computer interface in front of you. HoloLens has zero buzz, even though it’s been in the works for a while and MS has talked it up plenty. Because this kind of thing is not what people want.

“Pokemon GO” is, oddly enough, a testament this fact, because as an augmented reality game it’s pretty terrible and feels half-formed. And yet it’s a phenomenon even so. The lesson here is not “if we do a better one it might be more more successful,” as creatively tempting as that may seem. The lesson here is that people like Pokemon, and this Pokemon game had the lowest barrier for entry of any Pokemon game ever.

Guess what? None of the companies that are going to try to rip off “Pokemon GO” by churning out a bunch of AR games will be making a Pokemon one. So these games will come and go without my mom ever hearing about them, because my mom — who I’m using to represent anyone who isn’t a tech enthusiast — doesn’t care about augmented reality.

All this is a story we’ve heard over and over in tech and gaming. A thing is successful, and everybody else lines up to do their own version of it and it never really paying off. Activision’s “Call of Duty” franchise kicked off years of bad imitations and seemingly every game getting an online multiplayer component regardless of whether it made any sense. That came from a lack of understanding of why “Call of Duty” was so popular. And it ignored that by trying to rip off “Call of Duty” they had to directly compete with it. As any of these augmented reality things on the way will have to compete with the juggernaut that is “Pokemon GO.”

Likewise, a rush on augmented reality games and apps will come from a lack of understanding of why “Pokemon GO” is popular. Unfortunately, the tech sector only knows how to learn things the hard way.