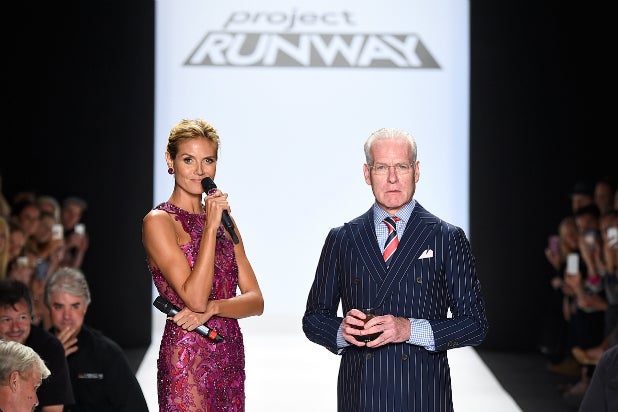 Heidi Klum and Tim Gunn opened up about their decision to “jump ship” from “Project Runway” after 16 seasons together.

“When everything kind of fell apart and the show was going to a different owner, for me, it was like, okay, we’re either going to just go back there and it’s gonna be the same old same old — or now it’s this opportunity to jump ship,” said Klum.

“I called Tim and I said, I’m jumping this ship. Are you with me? I don’t know where we’re gonna go, but I’m really eager to see what we can do. “

“We jumped together,” Gunn added.

The two explained the limiting factors of “Project Runway” that lead to their decision to leave the show and start “Making the Cut” with executive producer Sara Rea.

“Our hands were tied,” said Klum. “Because our imagination was bigger than what we were about to do or couldn’t do, because there’s a certain look to a show that also sometimes you don’t want to change.”

“When you do a show, someone always has to pay for it, and other people want you to do certain things, so you can’t have the creative freedom, that when you don’t have [when someone is like], okay you’re designing for this water company, so you have to make something out of these water bottles and lids, for example,” she said. “So that’s what we then had to do for that episode. And there’s nothing wrong with that.”

“In general, we always were a show that never had the biggest budget. When you have a bigger budget — thank you Amazon — you get to go to Paris and Tokyo and show these designers different things that injects so much creativity into their clothes.”

Gunn added that he felt “Project Runway” was limited by its rigid format.

“Who knew when we were taping Season 1 of ‘Project Runway’ that it would be a success? I didn’t,” Gunn said. “I thought this would be good cocktail party talk. This’ll never happen again. So when we returned for season 2, we were in a lockstep in a way, in a formula that had been determined in Season 1. And it perpetuated further into Season 3, and then eventually into Seasons 10 through 16, and we couldn’t break out of it,” he said. “There was a fear, not among us — we’re the ones who were thinking creatively and innovatively about what we wanted to do — but from the viewpoint of where the show sat, there was a fear of leaving that formula.”

The winning look from each episode of “Making the Cut” will be available for purchase on Amazon, and the winner will receive one million dollars and their own Amazon fashion line.