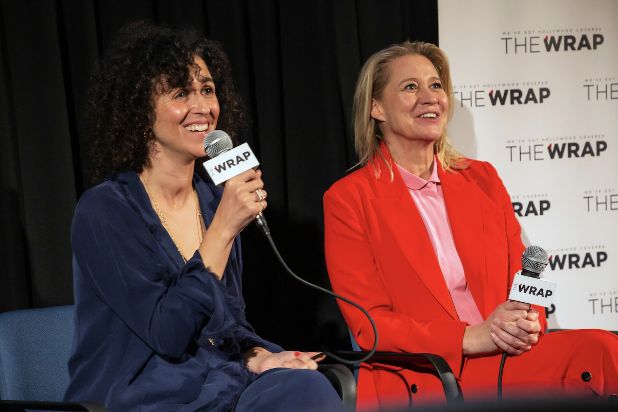 The story of a woman who has an affair with her teenage stepson in May el-Toukhy’s film “Queen of Hearts” may not sound like the most positive of female narratives in the lens of the #MeToo movement.

But el-Toukhy and star Trine Dyrholm explain that you’re supposed to feel uncomfortable — even shameful — while watching this otherwise strong, confident and powerful female character show that her morally corrupt behavior still makes her human. And telling stories about any women on screen — even bad characters — is still crucial.

“We stand on the shoulders of the female filmmakers and feminists before us. A new sort of feminism is thriving,” el-Toukhy told TheWrap’s Sharon Waxman Thursday following a screening of the film at the Landmark Theatres in Los Angeles. “Equality is not only enhancing the good in a woman in a film. It’s also daring to depict the bad. What can be seen as radical or controversial about that is that we don’t have enough female characters.”

Also Read: 'Instinct' Star Carice van Houten on How She Had to 'Dig Deep' to Play Prison Therapist to a Serial Rapist (Exclusive Video)

The Danish film stars Dyrholm as Anne, a wealthy and powerful lawyer for foster children, rape victims and more who takes in her husband’s teenage stepson named Gustav (Gustav Lindh) after he’s been kicked out of his school and his mother’s home in Sweden. After first confronting him about his behavior, Gustav soon becomes a welcome part of the family, and Anne slowly warms to him and ultimately seduces him.

But the moment she finally gives in to her urges is seen in a shockingly explicit sex scene, complete with Dyrholm performing oral sex on this young man who is still underage. If it feels hard to watch and makes for a jarring twist in the film, that’s exactly the point.

“I really wanted the audience to hope that they would have sex, hope that they would get each other, even though it was wrong, even though it would create all sorts of problems,” el-Toukhy said. “And then once that happens, once they get each other, they have sex, it’s so brutal, and it’s so in your face that as an audience member, my ambition was, you start questioning if what you wanted was really what you wanted. You start a moral dialogue with yourself.”

Also Read: 'Spider' Director Left Chile Just Before Political Protests Broke Out: 'I Will Return Tomorrow to Another Country' (Video)

The explicitness of the sex scene also avoided romanticizing the relationship. With “Queen of Hearts,” el-Toukhy wanted to examine the themes of family secrets and power structures. They researched similar real stories of teachers seducing young students or other family drama, and they found that the narrative of a woman engaging in an abusive relationship with a young man was often romanticized compared to a similar case of a stepfather taking advantage of a young stepdaughter.

“Queen of Hearts” aims to correct that narrative as Anne’s persistence to maintain her secret slowly corrupts her, destroys her relationship with her family and even threatens the safety of Gustav. Dyrholm described Anne as by far the most complex character she’s played, and the intrigue of the film lies in how el-Toukhy in a way makes the audience complicit with Anne’s actions.

“I believe that she is not an evil person. She is a human being. And that is what life is,” Dyrholm said. “It’s complex, we have our background, we are reproducing a lot of things without knowing it. We’re doing our best to survive. It’s just things that we can connect with.”

“We created space for an audience to interpret it,” el-Toukhy added. “I know what I think about her actions, but we didn’t want to make a film where we tell the audience what they should think, because then the conversation is disappearing, and the only way we can change these structures is if people have an experience where they have to negotiate with themselves. It was a way to create a dialogue with the audience.”

“Queen of Hearts” is Denmark’s official selection for the 2020 Oscar race in the Best International Film category. The film premiered at Sundance earlier this year and was released in North America by Breaking Glass Pictures on Nov. 1.