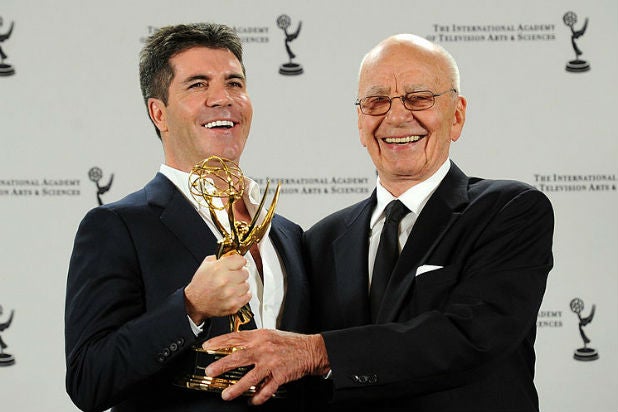 In a wide ranging interview about the creation of the iconic franchise that signs off Thursday night after 15 successful season, Grushow said it was Murdoch’s influence that got the show, a singing competition that would come to dominate the American TV landscape, on the air.

As chairman of the television entertainment group, Grushow was in control of both the broadcast network and the production studio in early 2002 when Gail Berman and Mike Darnell, President of Fox Broadcasting and the head of unscripted respectively, brought him an idea for summer replacement series from CAA — an adaptation of U.K. hit “Pop Idol” from producer Simon Fuller.

“The most interesting aspect of [the pitch] was CAA said the show would be underwritten by three brands — Ford, Coca Cola and AT&T. It was not the first time that’s been done, but it was uncommon,” Grushow said.

Despite the fact that every major network had passed on the series, according to Grushow, the idea of a self-sufficient show was attractive given Fox’s depleted budget for original programming. NewsCorp’s No. 2 and COO Peter Chernin agreed and casting was set to begin. But, as they often do, the deal changed.

“In the blink of an eye, Gail and Mike came back to me and said, ‘Change of plans.’ Those three brands were not going to underwrite the entire cost of the show. They were simply willing to be sponsors, which was a whole different ball game,” Grushow said.

“I had to go back to Peter and he drew the line, that we were not prepared to go that far over budget.”

Indeed, Chernin was willing to put an original series on the summer schedule and take a hit on reruns of Fox show that would have otherwise earned advertising dollars in the off-season — but, Grushow said, he was not willing to pay the licensing fees CAA wanted for Fuller’s brainchild.

“So rything stopped,” he said.

A routine meeting with NewsCorp CEO Rupert Murdoch to check in on summer plans changed everything. Grushow let it slip that the executives were “talking about” a series called “Pop Idol,” despite Chernin’s hard line that they would not be spending any fresh cash on an original series.

“I could see Rupert’s wheels start to spin and suddenly he blurted out, ‘That’s the show that Liz was talking to me about,'” Grushow said.

Liz would be Liz Murdoch, Rupert’s daughter and television executive who was based in the U.K. at the time — and a fan of Fuller’s “Pop Idol” which was was still airing its first season on ITV.

“Rupert then proceeded to take his fist, slam it on the conference room table and looked at me and said ‘Don’t talk, buy.’ And that was essentially the end of the meeting.”

Chernin and Grushow moved forward and “Idol” premiered in June to solid ratings, that would eventually explode into appointment television over the summer. But Murdoch wasn’t done hovering over the process.

It was instantly clear that Simon Cowell, the acidic British import that sat beside 80s’ treasure Paula Abdul and respected musician Randy Jackson, was crucial to the show’s success.

“As hard as we tried to make a multi-year deal with Simon Cowell, his people, led by Alan Berger at CAA and Sam Fischer, his lawyer at Ziffren-Brittenham, he absolutely refused to go beyond one year,” Grushow said.

The prospect of losing Cowell caused Murdoch anxiety. Grushow recalled an afternoon where Murdoch walked into his office unannounced, demanding a status update.

Further tinkering from the Australian magnate came when Murdoch insisted the second  season of “Idol” air on Fox’s fall schedule the same year — despite the fact that season one would not wrap until September 4, 2002.

“As a practical matter, it was impossible to do,” Grushow said. “I felt very strongly that ‘Idol’ should be a once-a-year-affair. I was pushing back hard against Rupert’s desire to turn it around and run it again.”

Grushow won out, and season two went up in January of 2003. The show would come to run for 15 seasons, create superstars in Kelly Clarkson and Carrie Underwood and recruit A-list judges panels with names like Jennifer Lopez, Keith Urban, Mariah Carey and Nicki Minaj.