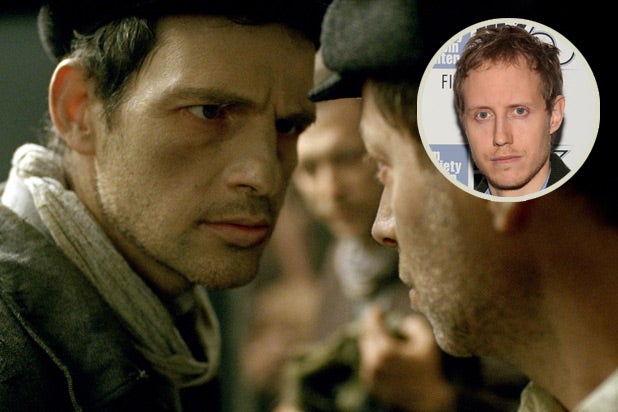 Not surprisingly, László Nemes’ wrenching “Son of Saul” was recently nominated for a Golden Globe award and shortlisted for the Oscars, as well as landing on most film critics’ best-of lists. Ever since the film won the Grand Prix at Cannes in May, its young director has been rightly praised for this brilliant and realistic portrayal of survival in Auschwitz in 1944.

Nemes was recently in Washington, D.C. presenting his masterpiece. He explained how he started making the film “10 years ago when he was just 28 years old.”

Nemes explains his purpose to “make one face visible for the public.” He wanted to explore “how this hell was like” by “projecting how it was to be there.” The film concentrates on one main character, Saul Auslander (played by Geza Rohrig in a riveting performance), a Sonderkommando member with the desperate job of cleaning out the bodies in the death chambers. When he comes across a young boy whom he believes is his son, he frantically tries to give the corpse a Jewish burial.

Nemes joins a cadre of filmmakers, like myself and Polish director Agneizska Holland, who are the descendants of survivors and feel compelled to address the Holocaust. He described how “both his grandmothers were Jewish and both were saved by his grandfathers.” Motivated partly by his own relatives’ experiences during World War II — “a great grandfather had perished in Auschwitz and a grandmother had survived” — Nemes decided to focus on a film set in Auschwitz.

With the use of “shadow focus photography,” realist sounds and even silence, Nemes creates a moving story of how hectic and confusing these death camps where to the dazed prisoners. Nemes feels very strongly that other directors have gotten it wrong in their depictions of the camps. He feels that Roberto Benigni‘s “Life is Beautiful,” a parallel story of a father and son, is a mischaracterization of the Holocaust experience.

Nemes is also very opinionated about how the current practice of not shooting movies on film is ruining the business. The Hungarian director was very determined to shoot “Son of Saul” on film and “not have such a serious topic be shown on pixels.” He feels that the movement to video is a “regression” of the art form. He is very proud of the sound design of the film.

The director also choose not to focus on the type of sadistic Nazi characters that are usually found in Holocaust movies. Instead he co-wrote a script about the Sonderkommandos, who not only had the horrendous job of cleaning up the dead bodies, but also knew they were fated to die themselves. It was a book of firsthand reports from these coerced prisoners at the extermination camps that inspired the storyline.

Nemes agrees that the Nazis’ efforts to continue to deport Hungarian Jews to Auschwitz at the end of the war, when they knew they were losing, are proof of their “persistent efforts to kill Jews.”

Speaking very good English, the Hungarian-born director describes how he also lived in Paris in his youth and as a young adult, and spent a year at NYU film school.

Nemes was thrilled to meet Ethan and Joel Coen, two filmmakers he respects greatly and who headed the Cannes Jury that awarded “Son of Saul” its prize. He described the debut there as “quite intense.” He is also grateful that Elie Weisel, a writer and Auschwitz survivor, “loved the film” when he recently saw it.

Although he has received many screenplays since “Saul’s” success, Nemes is already working on his next film, which is set in Budapest before World War I.

For myself and other children of Holocaust survivors, we are forever grateful to Nemes for making “Son of Saul.”  When I visited Auschwitz, where my grandparents, Aunt and Uncle perished, I could not imagine how horrendous the conditions were.  Only in watching “Son of Saul” do I finally comprehend what survival felt like at this death camp.