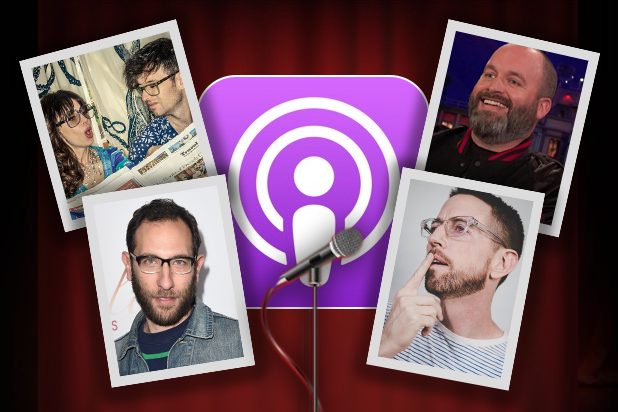 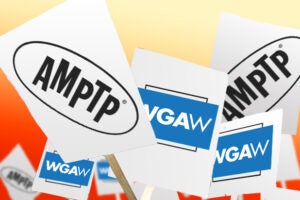 How Hollywood’s Guilds Are Bracing for Crucial Negotiations in 2020

Why Stand-Up Comics All Need Podcasts of Their Own

”I can count maybe three comedians that don’t have one,“ comedian and podcaster Natasha Leggero told TheWrap

In 2010, comedian Tom Segura marked two firsts that would change his career: He came out with his first comedy album called “Thrilled.” He also started a podcast, with the goal that it one day would make enough money to cover his rent for the apartment he shared with wife and co-host Christina Pazsitzky. Their apartment’s brown leather couch doubled as their studio.

Nine years later, their podcast “Your Mom’s House” has moved out of their apartment and into a 3000-square-foot studio. Four more podcasts, including “Dr. Drew After Dark” and Pazsitzky’s “Where My Mom’s At?” are also under the umbrella of Your Mom’s House Studios, Segura and Pazsitsky’s podcast company. Segura said they are still growing, with plans to move into an even bigger space soon.

Maintaining a popular podcast has become a must-have for stand-up comedians, even as more comics get specials on streaming services like Netflix and Amazon. Comedian Natasha Leggero, who co-hosts “The Endless Honeymoon Podcast” with comedian Moshe Kasher, said the amount of content on the internet has disrupted the way audiences discover comedians, fueling the power of podcasts.

“I can count maybe three comedians that don’t have one,” Leggero said. “I remember going to a party at Sarah Silverman’s house and she had a sign outside the door that said you’re not allowed to ask people to be on your podcast.”

For Segura, “Your Mom’s House” rising popularity came at a time when podcasts became a way fans connect with comics. Comedy was the second-biggest podcast category in ad revenue in 2018, according to the Interactive Advertising Bureau. That’s up from fifth in 2017. As the comedy podcast genre continues to grow, comics like Segura, Leggero and Ari Shaffir are using the medium to boost their brand image without going through a middle man to reach the masses.

“For sure, the two biggest things to me in my career on a day-to-day basis is being on Netflix and having a podcast that has a following,” Segura told TheWrap in a recent interview.

“Your Mom’s House” has changed somewhat since its inception in 2010, but its free-form conversations with Not Safe For Work(NSFW)humor have kept fans engaged. Segura was first encouraged by comedian Joe Rogen, who hosts the ever-popular “The Joe Rogen Experience,” to start a podcast with his wife, using Rogen’s producer, Brian Redban. Along with Pazsitzky, the comedy couple that now has five Netflix specials became known for showcasing internet videos they find funny and adding their own commentary.

Fans of the podcast then began to send in their own videos. They would reenact the memes the hosts can’t stop laughing over (Like “Good Morning Julia”) and experiences the hosts tell on the podcast, like the time Segura went to a Starbucks drive-thru and gave an employee a strange hello.

“It sounds like it’s calculated but it’s really not. We would go to a Starbucks drive-thru. When we hit the drive-thru and I would say ‘Hi Mommy.’ And I found they would always not acknowledge that,” Segura said. “We would tell the audience that, and they would start recording themselves doing it. We ended up doing a mashup of the hundreds and hundreds of submissions.”

Segura and Pazstizky encouraged fans, and their engagement began going through the roof, Segura said. This unique fan interaction is crucial for Segura and Pazsitzky, who frequently promote their stand-up dates and specials on their show.

“Every time I have a special come out, you get a bunch of messages like ‘Hey I really like you, I’m going to check out your podcast’ and [with] having the podcast, you say ‘Hey I have this thing on Netflix,’ it drives people from the show over to Netflix,” Segura, said “There is this symbiotic relationship.”

Also Read: Emmys by the Numbers: HBO Holds Off Streaming Surge With Final Season of 'Game of Thrones'

Your Mom’s House Studios podcasts collectively average more than 2.5 million podcast downloads a week, according to Segura. Add the downloads they get from their back catalogue, a pool of more than 500 podcasts they’ve recorded so far, and Segura says they can average more than five million weekly downloads.

Comedians using hit podcasts to increase brand awareness isn’t new. Marc Maron, Bill Burr and Joe Rogan (all who had podcasts before their Netflix specials) topped the Apple podcast charts since early in the decade. Podcast companies like Earwolf and Forever Dog have long included stand-up comics in their programming, such as Chris Gethard and SNL’s newest cast member Bowen Yang. But the path to being a popular comic has changed in the age of streaming and YouTube, where a podcast can drive your audience directly to your Netflix special and vice versa.

Netflix did not respond to TheWrap’s request for comment for this story.

“A lot of late-night shows are great, but there’s a difference between now and 20 years ago when someone would do Letterman or Leno, ” Segura said. “There’s more choices now. If you don’t have an established fanbase as a young comic and you go on a podcast that gets a half a million views and million downloads, that’s a lot of people they’re exposed to. And they get to hear you in long-form conversation rather than five minutes.”

Comedian Ari Shaffir, who hosts his own podcast “Skeptic Tank” and has the Netflix special “Double Negative,” echoed that statement, saying podcasts allow listeners to invest in the host if they like what they hear, without the help of the networks.

“Once they’re listening to you for not just one month, but 30 months, they say, ‘I know him, I trust him,'” Shaffir said. “I’m not seeing them as a character in a sitcom. I’m seeing them as a human. I want to support someone I like.”

Comedian Neal Brennan likened going on the “The Joe Rogen Experience,” a laid back conversational podcast that averages more than a million downloads per episode, to “doing Johnny Carson in 1978.”

“I was in Singapore doing a show, and an American walked by and was like, ‘Neal Brennan from Joe Rogen is here?'” he said. “We don’t need to be stand-up funny on podcasts, we just need to be friend funny.”

Late-night TV isn’t bringing on stand-ups like it used to. In 2017, Vulture writer Jesse David Fox warned about the decline when there was the suggestion that Conan O’Brien would reformat his TBS show. Fox said that in 2016 O’Brien had 41 stand-up sets on his show, compared to the next closest, “The Late Show with Stephen Colbert,” which had 16.

“Assuming that Conan’s eventual new format doesn’t allow the time or flexibility for stand-up sets, it would be a significant blow to comedy,” Fox wrote.

In 2019, that reformatting finally happened. Conan reformatted into a 30-minute show, although he still interviews stand-ups on the show and on his podcast “Conan O’Brien Needs A Friend.”

When asked if podcasts can dethrone the late-night spot in priority for a comedian promoting their work, chief operating officer at O’Brien’s production company Team Coco Adam Sachs said that “it’s possible,” but late-night shows like Conan are moving to digital so they can be consumed by the same on-demand audiences.

“As an ambitious media company, our goal is to be where the audience is going. That’s on Youtube, social media and certainly podcasts,” Sachs said.

Stand-ups are putting promotion in their own hands when it has become increasingly difficult to find podcasts or Netflix shows on their respective platforms. Spotify redesigned its app to include podcasts in its library page and Google started showing podcast episodes in searches. Both changes happened this year.

Netflix also has come under scrutiny for how it promotes its programming on its site, as was the case with the “Tuca & Bertie” cancellation this summer, when the animated show’s own creator Lisa Hanawalt said she had to search for her show in order to find it.

Netflix has made its own big push into podcasting in the last year, giving staff members a chance to talk about working at the company and its shows with podcasts like “We Are Netflix” and “I’m Obsessed with This.” It’s an opportunity to further the connection between the brand and its audience without a third party, a page from the playbook that stand-up comics have employed.

“They want you to go on the platform and just get lost. And stay there,” Segura said about Netflix and podcasts. “And that’s what you hope when you have a library of content like we do now. It’s like, ‘Yeah, I want you to come to the podcast, binge and watch a ton of these.’ Or go to the clip channel and find something you like…The worlds are kind of the same. Find a topic that you’re interested in. Go deep.”