Donald Trump may be dominating headlines since launching his presidential campaign in June. The dinosaur-taming Chris Pratt was the season (and all-time opening weekend) box office king, while the breakout stars of smash hit “Straight Outta Compton” are booking big movie gigs and helping sell soundtracks.

But since Memorial Day, no one has had the same choke hold on her fan base — or the news cycle — as the country-pop star from Wyomissing, Pennsylvania. From Swift’s influence-flexing on Apple Music to the mass hysteria over her famous friends, TheWrap is ready to declare the Summer of 2015 for Swift.

Here’s 4 reasons how and why:

Also Read: Taylor Swift Gets Candid on Kanye West, Apple Music Takedown: 'I Had to Write It'

1. Taking a Bite Out of Apple

While her North American tour has been raging since May 20, the Summer of Swift arguably began with her jaw-dropping challenge to Apple. In an open letter on her Tumblr page, Swift scolded the tech giant at the launch of its streaming music service.

“I find it to be shocking, disappointing, and completely unlike this historically progressive and generous company.”

Long an iron fortress of music thanks to its ubiquitous iTunes store, no one expected the response the company issued — to completely fold.

“#AppleMusic will pay artist for streaming, even during customer’s free trial period,” Eddy Cue, a Senior Vice President, tweeted at the time. “We hear you @taylorswift13 and indie artists. Love, Apple.”

The move was universally praised, elevating Swift’s cache from ruler of teenage hearts and mass seller of concert tickets to global force in a rapidly changing music business. 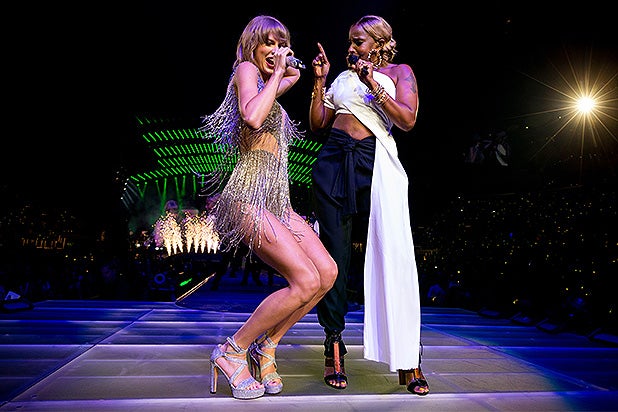 2. The Unstoppable “1989 World Tour”
The accompanying tour to Swift’s first full pop record “1989” grossed $17 million in its first five shows. Since kicking off in Louisiana, she’s played 18 domestic dates. Album sales and ancillary businesses aside, touring is where any act as big as Swift make their bread.

But more than a collection of hit songs and bedazzled costumes, the “1989” tour has crystallized an image many thought impossible for a serial dater of male celebrities and the author of countless songs about heartbreak: Swift finally changed her unlucky-in-love narrative to that of alpha Best Friend.

Also Read: Taylor Swift's '1989' to Get Covered in Its Entirety by Ryan Adams

Endless ink on the music artist, including a recent New York Times story titled “Female BFFs: The New Power Couples,” have touted the power and significance of Swift’s female squad and the posting of their various activities.

Images of the attractive bunch baking in Swift’s multimillion-dollar Manhattan kitchen or speed-boating on the Thames River have inspired rampant use of the hashtag “#squadgoals,” a nod to the aspirational effect these alliances have.

But all the attention has only increased the pop singer’s star wattage.

In May, she premiered the music video for her song “Bad Blood” with cameos from an embarrassment of notable women young and old. Cindy Crawford, Mariska Hargitay and Ellen Pompeo donned skintight black leather with the same conviction as Cara Delevigne, Lily Aldridge and Zendaya. 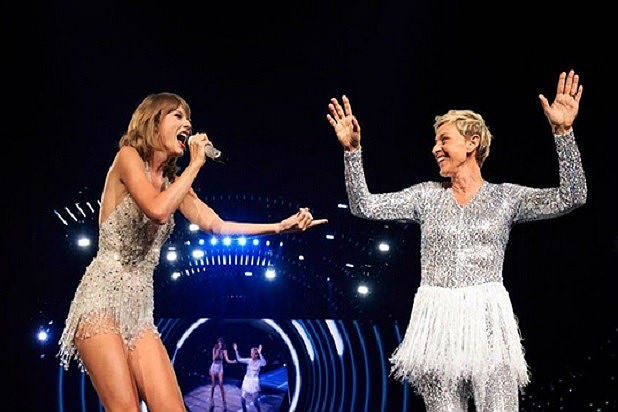 For the “1989” tour, it’s become routine for Swift to invite an absurd number of stars on stage while she sings the breezy hit “Style.”

It’s a compelling display of social currency to match the money she’s socking in the bank — but not everyone is clicking the like button.

In July, Gawker published a takedown titled “Taylor Swift Is Not Your Friend,” in which the author suggested, “Taylor finds decorating herself with women besties to be a surefire method for finding the approval as a queen that she’s always wanted.”

Swift is accused of executing a plan “to be as famous and as rich as she can possibly be… by using other women as tools of her self-promotion, she is distilling feminism for her own benefit.”

Afterward, author Lara Marie Schoenhals posted a clip mocking Swift’s absurd on-stage cameos, dramatizing the stunt by playing Swift and welcoming names like the female victims of ISIS, the “fabulous” victims of Bill Cosby, the ashes of the victims of the Salem witch trials and a hologram of Maya Angelou.

“I think she deals with it by not addressing it,” Schoenhals told TheWrap of backlash. “She can creatively route it like [when she has] written about ex-boyfriends.”