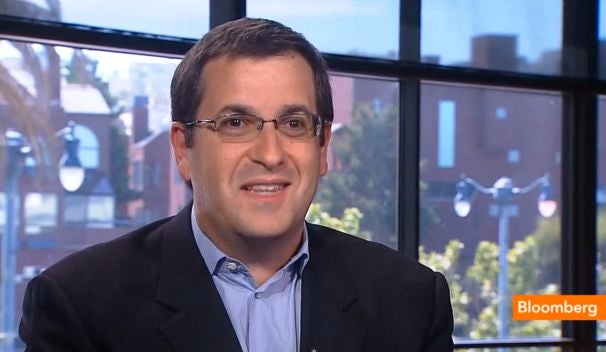 Silicon Valley’s most powerful people attended a memorial service this week for tech entrepreneur Dave Goldberg. They were joined by many of Hollywood’s influential names – from Disney CEO Bob Iger and actor Ben Affleck to George Lucas and U2’s Bono, who performed the song “One.”

Goldberg, who died last Friday from head injuries sustained after falling off a treadmill, spent a significant portion of his career in Los Angeles.  And his influence can be felt in a range of media industries, from music to the YouTube ecosystem.

Early in his career, Goldberg worked at Capitol Records. One of his key initiatives led to the introduction of CDs at Starbucks.  In the book, “Pour Your Heart Into It: How Starbucks Built a Company One Cup at a Time,” Starbucks CEO Howard Schultz recalled how the idea came together:

“Jennifer Tisdel, our director of retail marketing, was having Sunday brunch with a friend visiting from Los Angeles, Dave Goldberg.  Dave worked in new business development for Capitol Records, which owns Blue Note, and he told her about an idea he had for marketing Capitol’s Music through a retail company.”  Starbucks ended up selling more than 75,000 copies of “Blue Note Blend.”  The company has described that CD as “the beginning of music at Starbucks.”

As the Internet opened up new possibilities for music, Goldberg founded LAUNCH media, which delivered music and music-related content online. “What I liked about music was the fact that we were doing something pretty disruptive,” Goldberg told me in a 2011 interview.  At the age of 26, Goldberg sold LAUNCH to Yahoo, where he then built up Yahoo Music.

This week, Yahoo Music Executive Editor Dave DiMartino described Goldberg as a pioneer in a post titled “The World Will Miss Dave Goldberg”:

“As anyone who was there then knows: Dave Goldberg was truly a pioneer. Music video on the Internet? He made an investment, brought in a company, led the pack. Internet radio? LAUNCHcast was staggeringly good, in its prime massively better than today’s also-ran Pandora, and likely the best personalized radio service anyone has yet to experience. Music on demand? Well before Spotify was making headlines, when iTunes was just getting started, Goldberg introduced Yahoo Music Unlimited — and, as pioneers do, suffered the wrath of those gatekeepers at record labels and publishing companies who saw their business models threatened.”

Also Read: Sheryl Sandberg on Marriage to Dave Goldberg: 'The Truest Partnership That I Could Imagine'

Goldberg, a regular at the Allen & Co media conference with wife Sheryl Sandberg, was also intimately familiar with the changing landscape in television.  He played a key role on the board at Graham Holdings (formerly The Washington Post Company), which owns cable and TV station assets.  And when Goldberg’s friend and former Yahoo colleague Steve Raymond saw an opportunity to take advantage of the growing talent pool on YouTube, Raymond turned to Goldberg for help with the business plan. Dreamworks Animation’s AwesomenessTV acquired Big Frame in 2014 for $15 million.

“Being Dave’s friend meant having him in your corner 100% of the time,” Raymond told The Wrap in an interview. “He was a visionary leader in the digital distribution of content with LAUNCH, so the emergence of the YouTube ecosystem was something he understood and found exciting.  I didn’t have to ask for his help, it just came. He supported Big Frame generously with his time and ideas, and having him and his network in my corner as a first time CEO was invaluable. We are all going to miss him terribly.”

Perhaps it was fitting that Goldberg’s last job was running online survey platform SurveyMonkey. Goldberg was always ahead of the curve, thanks to his ability to capitalize on underlying trends and data.  In our own conversations, he often cited SurveyMonkey findings, which predicted the rise of Netflix and the threat of cord-cutting.  “If you use your old business models to restrict people, they’re going to find ways to get that content the way they want it,” Goldberg told me last June.

Jon Erlichman is Los Angeles based television & print journalist, covering media, entertainment & technology. Most recently, Jon served as a correspondent for ABC News and as a contributor for HLN. Previously, he served as Senior West Coast Correspondent for Bloomberg Television & Bloomberg News. Jon was first to report Satya Nadella would be the new CEO of Microsoft. He also broke stories on Apple, Twitter, Netflix, AMC Networks & BuzzFeed. On television, he has interviewed a wide range of executives & creators, including Bob Iger, Barry Diller, Sergey Brin, Mark Zuckerberg, Oliver Stone, Vince Vaughn, Mike Judge, Kobe Bryant, Usher, Ryan Seacrest, Stan Lee, & Arianna Huffington. He was named one of the "100 tech people you have to follow on Twitter" by Business Insider.