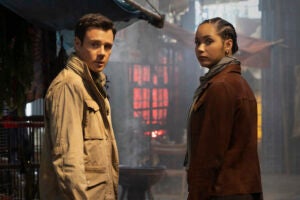 Peacock put itself back into the streaming ring with Monday’s announcement that the WWE Network would be folded into Comcast’s six-month-old service. The deal, which an individual with knowledge of the details said was worth $1 billion over five years, is a triple whammy: Wrestling fans get their favorite events, including Wrestlemania, for half the price, the WWE gets a bigger audience, and Comcast/NBC Universal gives a passionate, rabid fan base a big reason to check out Peacock.

“There is a halo effect to those users coming in for WrestleMania, but then sticking around and watching ‘The Office,’ watching ‘Yellowstone,’ watching some of the great content we have in the 30,000 hours that are now bundled in with their subscription price,” Rick Cordella, Peacock’s chief revenue officer, told TheWrap on Monday.

“We believe we can expand the accessibility of this content, right? That we can — through NBCU marketing, through the outlets that we have, all the various media outlets, through the price point reduction, through the addition of content — that we can grow this audience significantly that currently watched it,” he added.

Peacock really needed a big content play in order to stay in the ring with its bigger streaming rivals. With Netflix the dominant force in the streaming wars and Disney quickly making a name for itself, newcomers like Peacock, HBO Max and the upcoming Paramount+ (né CBS All Access) are fighting for relevance as well as subscribers. Warner Bros. hopes to beef up HBO Max by putting all 17 of its 2021 theatrical releases on its platform the same day they hit theaters (whichever ones remain open, that is).

But Peacock, unlike the other big streaming challengers, has a free tier that is partially backed by advertising dollars as well as a premium service collecting subscription revenue. Last month, NBCUniversal CEO Jeff Shell said Peacock had passed 26 million sign-ups. Those are not all paid, however, and the total lags far behind competitors. Comcast’s NBCU has projected Peacock will have up to 35 million subscribers by the end of 2024. In its first year, Disney+ has more than 86 million subscribers, though that is a global count.

Peacock’s biggest original content, which all streaming services live and die on, comes from reruns of the popular NBC sitcom “The Office” and a “Saved by the Bell” reboot that was just renewed for a second season. The service is also getting an influx of sports. Though the Tokyo Olympics this summer remain anything but guaranteed, Peacock has lined up some of the sports that are leaving soon-to-be defunct cable network NBCSN.

With Monday’s deal, Peacock now corners the market on all things WWE. Even though it leaves WWE’s “Smackdown” deal with Fox on an island for at least the next three years, the coupling with NBCU makes sense in a lot of ways. NBCUniversal has already had a long and successful relationship with Vince McMahon’s organization for decades. WWE’s flagship program, “Monday Night Raw,” and its NXT brand airs on USA. NBCUniversal cable networks also air several crossover/spinoff reality series.

The addition of WWE Network should be a seamless changeover for subscribers: In the third quarter of 2020, WWE Network averaged 1.6 million monthly paid subscribers. Though we don’t know how many subscribed to both, it could give those who are free members a reason to fork over an additional $5 a month to get access to the 17,000 hours of content that include the WWE’s biggest events.

Under the terms of the multiyear deal, the WWE Network programming will become part of Peacock’s “Premium” tier, which includes ads and costs $4.99 per month. It will also be part of Peacock’s Premium Plus tier, which costs $9.99 and is commercial-free. WWE Network launches on Peacock on March 18, three days ahead of the first pay-per-view event, “Fastlane,” on March 21.