“The Deuce,” the latest HBO drama from the showrunners of “The Wire,” is a series about pornography and sex work. So, by nature, it’s pretty explicit.

In the first episode alone there are multiple sex scenes featuring both male and female nudity — genitalia included — along with scenes of sex workers attempting to titillate potential customers.

However, there were worries that “The Deuce” would go the way of other HBO shows and cross the line between dramatization and exploitation. For showrunners David Simon and George Pelecanos, it was out of the question to sanitize raw looks at the industry they’re depicting.

Also Read: 'The Deuce' Review: David Simon's New Drama Is Sexual, But It's No Fantasy

“You had to show what you were talking about but you had to show the shooting of pornography. We couldn’t just talk about it in dialogue,” Pelecanos said in a recent phone interview with TheWrap.

Given the sensitive subject, the show’s creators have been mindful to not cross the line into sexual exploitation, especially of marginalized groups, to serve the narrative.

“We were aware of that from the beginning, what a minefield it was,” Pelecanos said. “That was one of the reasons why David and I developed for almost three years before we shot the pilot.”

The concern is valid. “Game of Thrones” and “Westworld” have received criticism concerning their depictions of sexual violence and nudity. The former has specifically been taken to task for what many deemed to be excessive violence, mainly against women.

And “The Deuce” contains a lot of this, just by nature of its subject material. Beside the nudity, there are multiple scenes featuring abuse, whether it’s from a customer to his sex worker or from a pimp to his prostitute.

The National Center on Sexual Exploitation (NCOSE) issued a statement on Aug. 28 saying that “The Deuce” is yet another example of HBO normalizing nudity and sexual violence.

“The producers of ‘The Deuce’ need to use mental origami to convince themselves and others that this show is anything but egregiously exploitive misogyny,” said executive director and president Dawn Hawkins. “The topic of New York City’s 1970’s pornography and prostitution industries need not be depicted as a form of television entertainment. The point of the show is not to educate or enlighten, but to entertain, and ultimately, the substance of that entertainment is the sexual exploitation of women.”

There’s also the societal conversation surrounding misogyny, which ramped up during the 2016 election. Pelecanos specifically noted future President Donald Trump’s comments about being able to grab women “by the p—y” when discussing how he and Simon approached doing the show and how it raised concerns among the staff and among the two showrunners about how women were viewed. 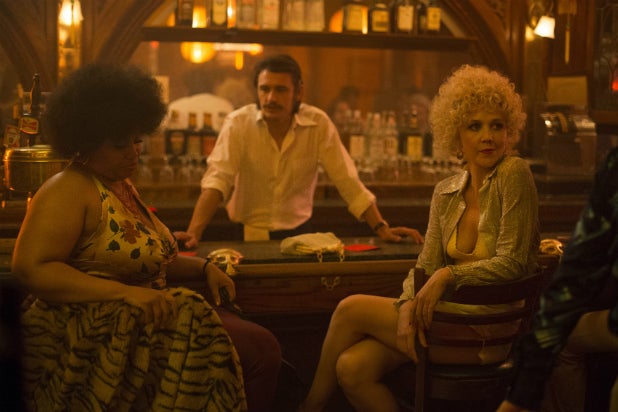 However, while anger-inducing, current events had a positive effect on the crew, along with other moves that made the behind-the-scenes world of “The Deuce” more balanced.

“It jacked up some of the players,” Pelecanos explained. “It sort of affected what we were doing. People got passionate about making this show.”

The show’s leaders also packed the writers’ room with a diverse group of women, people of color, and gay and transgender people. They knew, specifically, getting women on board was important, which is why half the episodes were directed by women. Michelle McLaren, best known for directing episodes of “Breaking Bad” and “Game of Thrones,” directed the pilot.

“We had all kinds of people in the room because we wanted to represent a panorama of characters,” Pelecanos continued. “David and I knew as a couple of straight, middle-aged white guys that no matter what our intentions were… we were destined to fail unless we got help.”

Also Read: 'Game of Thrones': How HBO Beat Its Hackers

Pelecanos and Simon also gave Maggie Gyllenhaal, who plays Eileen “Candy” Merrell, a sex worker who gets into the world of film pornography, input on her character. Granted, she was a credited producer, but that wasn’t just a title. He said that the actress would give notes on what Candy would be like, such as how she views pornographic movies. (“She’s an artist at heart,” Pelecanos said Gyllenhaal suggested).

At the Television Critics Association press tour back in July, Gyllenhaal commented on concerns of misogyny, but agreed with the showrunners that the way it was handled was appropriate.

“I think it’s become clear in a way that maybe it wasn’t totally clear a year ago that there is a huge amount of misogyny in the world. I think we thought we were in a better place than we were,” she said. “Here we have this opportunity to pick it up and lay it on the table and to do it in a way that’s thoughtful and smart, and also real.”

Ultimately, as with the duo’s previous work on “The Wire,” it was essential to keep the focus consistent. The point of “The Deuce” isn’t to show off women’s bodies or capitalize on shock value — just like “The Wire” wasn’t just about drug use or the drama surrounding it. Pelecanos made it clear that “The Deuce” is about business and history, a culture’s relationship with pornography — and how a specific era in New York impacted that culture for decades to come.

Also Read: Another Problem for HBO's 'Confederate': It's Been Done

“I’m really interested in how things work,” he explained. “One of the best things that ‘The Wire’ did was it showed you why things affect people the way they did. The people who do the work at the bottom benefit the least.”

The difference is, in the case of pornography and sex work, people are selling flesh.