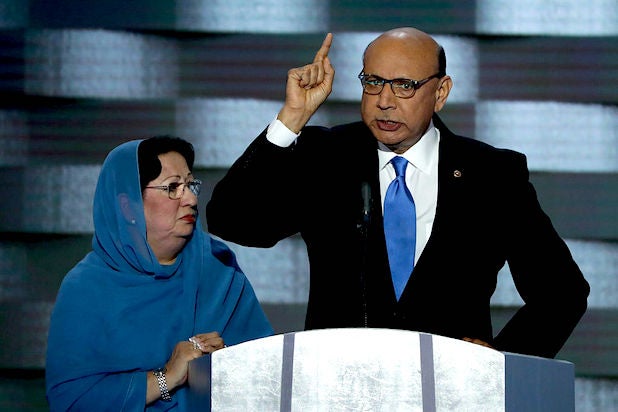 Donald Trump’s recent attack on Ghazala and Khizr Khan, the Gold Star parents of a fallen Muslim soldier has sparked a national outcry and an all-out crisis within the GOP.

It’s also given members of Hollywood’s Muslim community a renewed sense of hope and optimism.

“In the process of trying to win the cheap seats, Mr. Trump has actually brought attention to the community,” veteran screenwriter Kamran Pasha told TheWrap. “It reminded people that these are your neighbors, your friends.”

“This is a turning point for the Muslim-American community,” said Suhad Obeidi, director of the Muslim Public Affairs Council’s Hollywood Bureau, which serves as a bridge between the Muslim community and the entertainment industry. “The Khans have helped normalize the American Muslim community.”

The flap surrounding the Khans — whose son, Army Captain Humayun Khan, was killed in Iraq by a suicide bomber in 2004 —  started after Khizr Khan rejected Trump’s proposed anti-Muslim ban during an emotional speech at the Democratic National Convention. In an interview with ABC’s George Stephanopoulos three days later, Trump suggested that the soldier’s mother, who stood silently by her husband as he delivered the speech, was not “allowed” to speak because of her religion.

Ghazala Khan quickly shot back, saying she had not spoken because it was too painful for her to talk about her late son.

The attack on a Gold Star mother, perhaps the most revered figure in American society, touched off a firestorm that is now burning the Trump campaign.

Key party leaders are reportedly so worried, that they’re staging a Trump intervention. Trump’s poll numbers are quickly slipping and on Tuesday a longtime ally of Trump’s campaign manager let it slip that staffers in Trump’s war room were “suicidal.”

Obeidi said Trump’s repeated attacks on the Khans, unfortunate as they may be, could end up having a positive ripple effect on Hollywood.

“Hopefully storytellers and screenwriters will be able to write humanizing stories about the Muslim experience in America,” she said.

The entertainment industry has long been accused of portraying Muslims in a negative light. The 1920s saw “The Sheik” and “The Son of the Sheik,” starring Rudolph Valentino, both of which depicted Arabs as thieves, charlatans and murderers.

“Black Sunday,” released in 1977, featured the story of an Arab terrorist plot to detonate a bomb during the Super Bowl. And in 1994, Arab-American advocacy groups protested “True Lies,” starring Arnold Schwarzenegger, because they believed it depicted Arabs as violent zealots.

Even Disney movies have been criticized for perpetuating anti-Muslim stereotypes. According to the American-Arab Anti-Discrimation Committee, “Aladdin’s” lead light-skinned characters, Aladdin and Jasmine, had “Anglicized features and Anglo-American accents,” while the swarthy dark-skinned characters included “cruel palace guards or greedy merchants with Arabic accents and grotesque facial features.”

TV shows have received many of the same criticisms. Fox’s “24,” which aired from 2001 to 2010, was often accused of stereotyping Muslims as terrorists.  In ABC’s “Lost,” the character of Sayid (Naveen Andrews) was a member of the Iraqi Republican Guard who tortured people as a part of his job. And more recently, the representation of Muslims on Showtime’s “Homeland” prompted The Guardian newspaper to ask, “‘Homeland’ is brilliant drama. But does it present a crude image of Muslims?”

Whether or not the Khans inspire actual change remains to be seen. But the fact that it was a Muslim American couple who precipitated Trump’s looming downfall is, for many Muslims here, a good start.

“It would be amazing if the Khans actually help Trump lose the election,” said Obeidi. “It’s karma.”