As the pandemic has continued to upend life in the U.S., political reporters have also had to adjust their approach to covering one of the most pivotal presidential elections in recent history.

TheWrap spoke with CBS White House correspondent Weijia Jiang, political correspondent Ed O’Keefe and political director Caitlin Conant shortly after the Republican National Convention to discuss their the two weeks of unprecedented conventions, how their election coverage has been shaped by the pandemic and what they’re focused on in the remaining two months until the November election.

This is the second of a two-part Q&A with Jiang, O’Keefe and Conant. See part one here. The conversation has been edited for length and clarity.

This isn’t necessarily unique to the conventions, but I think there’s always the question [for TV networks of] how much of this event do you play straight for viewers and how much do you cut in to fact-check. We’ve seen this with even the coronavirus press briefings, for example, with some networks taking it off air because they just need to fact-check. Before coming into convention coverage, or now that you’re reflecting [afterward], what was your approach to this?

Conant: At CBS, we approach our coverage as, we need to provide context for our viewers. Obviously, people are tuning into the conventions because they want to watch the conventions and hear the speakers. But we have to be able to say, what do we expect to hear tonight? What will be interesting if we don’t hear it tonight? Who are these speakers speaking to, and get at the strategy, and then afterwards, point out what was better not said.

And to your fact-checking point, that’s something we do every day. It’s just in our DNA because you always have to say if something was not accurate or without evidence and be able to point that out and provide the bigger-picture context of why does this matter and why should someone who’s watching this at home care.

Thinking about the feasibility of [fact-checking live on air] though, if their speeches are going back-to-back, sometimes it doesn’t seem like there’s enough time to cut in between every single speech to do the fact check. What are your thoughts on which ones to focus on if you are in that time crunch?

Conant: Time is always a constraint and it’s a balancing act every night, and each night of all eight nights of both conventions were different, and you have to make real-time decisions.

Jiang: Yes, time is obviously a factor when we’re talking about prime time and cutting in speeches, but we’re not just covering the convention in real-time. We do a lot of coverage the day after, and if I’m doing our morning show the next morning or even evening news, when there are really obvious mistakes or things that need to be checked, we do that, and so our coverage continues. 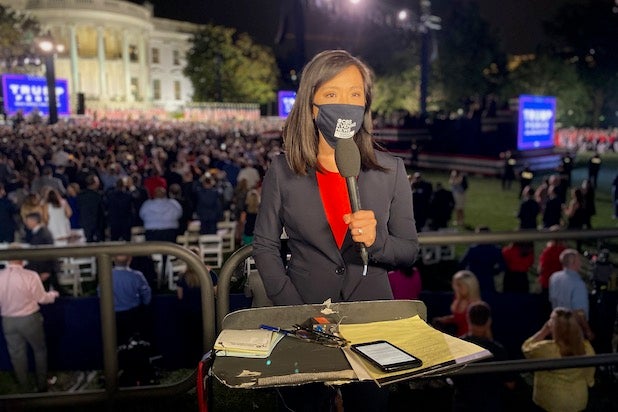 It’s some 60 days until the election. How are you all thinking about what’s most important to you in terms of coverage?

Conant: Whether the public health crisis, economy, racial inequality and then we also are still in the midst of a pandemic and we don’t know exactly what voting is going to look like, I think the more we can step back and keep focused on the big picture, and being able to inform our viewers about that, and then get at the why of this election and why voters are going to end up voting the way they do, is very important.

I’ll be honest, there’s certain challenges that we have right now in terms of covering battleground states. Typically, I would have reporters living in these states right now. And I’m still hopeful they’ll get there. But pretty early on, when we all got sent home in March, I decided to assign my team’s battlegrounds — basically, all the campaign reporters, they [embedded in] battleground states remotely, knowing that we might be in this for a long time, and we at least needed to prepare. And as part of their responsibilities, one was just sourcing up in the states like you would do if you were living there because it’s harder to make those connections when you’re remote and when you’re a national reporter, as opposed to a local reporter.

O’Keefe: One of the things we will have to focus a lot on in the next few weeks is not who you’re voting for or why someone might want to vote for somebody, but how, given so many people are going to be voting by mail or voting early.

Conant: Yeah, just preparing the public that we might need to have some patience here. We need to at least prepare that we’re not going to know the results on election night. And the more we can remind our viewers that that is a possibility, the better.

Comparing your work from the 2016 election to now, what are the biggest things you are doing differently to approach your coverage leading up to that November election night?

Jiang: What Caitlin just mentioned is that we would normally kiss our families goodbye and say, ‘We’ll see you on November 4.’ And I think that face time with the campaign and traveling and being with them is really valuable because you can bring insight to viewers [on] the conversations happening behind the scenes that we don’t have access to right now.

I can [have those conversations] over the phone, but I think regardless of whether it’s election season or not, that face time is at the core of what we do to build relationships, and the lack of that has really changed everything, not only for our beat and covering this story, but covering every story. And so I think that’s one of the most obvious differences of where we were four years ago versus today.

O’Keefe: Yesterday, I was making lunch for my daughters when I got the Twitter alert from Joe Biden’s spokesperson that he was about to be on MSNBC to talk to Andrea Mitchell, and I had to convince and cajole the four year old to give up the TV for 20 minutes so that I could watch Joe Biden while my wife was in the other room with a TV in it doing a Zoom call. And then the moment he came on TV, they started screaming and running around the room and I could barely hear it, and I’m thinking to myself, this isn’t how we’re supposed to be doing this. But this is the way we’re doing it. It’s a very different reality, and it put a lot of strain on our families who, like Weijia said, are more used to us being physically gone every four years than trying to live life and do [our] job at the same time under the same roof.

And then, of course, it’s been harder to fight for time and attention, but that’s understandable. But that’s also different and has forced the rethinking on what really matters in an election like this.