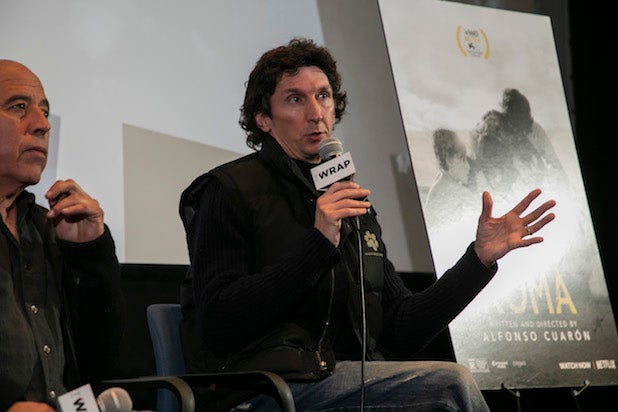 "ROMA" screening and Q&A with Oscar nominated sound mixers Craig Henighan and JosÈ Antonio GarcÌa, Hosted by The Wrap and held at The Landmark Theatre.

Alfonso Cuaron isn’t afraid of a little relative silence. In each of his last two films, the Academy Award-winning director has taken audiences deep into the heart of Mexico City (2018’s “Roma”) and the abyss of space (2013’s space thriller “Gravity”) through the use of sounds happening in the environment. The result, as “Roma” sound mixer Jose Antonio Garcia would say, is a spiderweb that reels you in and overtakes you once you’re in its grasp.

Garcia, who has a long working relationship with Cuaron, spoke at the Landmark theater in Los Angeles on Tuesday night after a screening of the Best Picture- nominated film. The film follows the life of a live-in housekeeper in the early ’70s and her evolving relationship with the family.

Garcia was joined by “Roma” sound editor Craig Henighan and sound mixer Skip Lievsay. All three are nominees for this year’s best achievement in sound mixing.

Henighan told the TheWrap’s Sharon Waxman that the goal of the score was to make the audience feel like they were a part of the scene themselves.

To accomplish this feat, the team used Dolby Atmos sound. With Atmos, the many sounds of Mexico City are mapped around the audience members so they could sense where a dog in the distance is barking from or a how fast a car is creeping up into the driveway.

“There is no music score. All of our music was in old radios,” Henighan said. “The environment had to become the score.”

Getting the sounds of the environment was never more challenging for the sound team than toward the end of the film when the family goes to the beach with the housekeeper Cleo. For the scene on the beach, the sound team worked extensively to make the waves sound relentless, “like it was never going to stop,” Henighan said.

It wasn’t until Cuaron gave his little celebratory dance that the sound team knew they hit the sweet spot.

Lievsay was part of the “Gravity” team that won Best Sound Mixing at the Academy Awards in 2014. Lievsay said that during the making of “Gravity,” they wanted to put the audience in a space suit with them by re-creating the sounds you would hear in your helmet.

Unlike with “Gravity,” the team on “Roma” had much less time to plan out how to capture the right sounds in a scene. That was intentional on the part of Cuaron, who said in a story published by TheWrap in December that he would keep cast members and crew alike in the dark about what scenes they would shoot the next day.

“This was a process where nobody had the screenplay,” the director said . “Nobody on the crew, none of the actors. It was only me who knew. And I shot in absolute sequence, so everybody was learning as we were going.”

The sound team confirmed Cuaron would only give them pages day-of with general guidance of what was being shot that day.

Garcia remembers having to be there for the scene where the kids in the family are playing in hail. That shot alone would take 65 takes, he said, partly due to the difficulty of getting the sounds of the kids, the weather and everything around them accurate enough.

Despite the shoot being labor-intensive at times, Garcia still regards “Roma” as the best experience shooting in his life.

“The way he handles the language of a scene is amazing,” Garcia said of Cuaron.