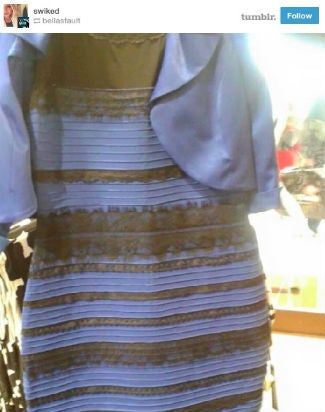 There are countless important global issues and matters of cultural importance discussed on social media, but #TheDress was not one of them.

The top trend on Twitter Thursday was whether a dress was blue and black or gold and white. Different users saw different colors — and were all deadset that they were right.

The debate was sparked by a Tumblr post earlier in the day, which quickly picked up steam and sparked passionate responses such as, “If that’s not gold my entire life has been a lie,” “I AM GOING TO CRY,” “My class just had a debate over this. Half sees black and blue, the other half sees gold and white. Someone please explain this…”

One user even suggested reaching out to NASA to solve the color conundrum.

Once the interest in net neutrality faded and the runaway llama drama in Arizona was under control, #thedress went on to take over Twitter. Even Fox comedian Mindy Kaling jumped on the trend — and then dragged B.J. Novak and the Pope into it.

“@bjnovak: I love this picture of @Pontifex in his traditional black & blue pic.twitter.com/kRtX9awmHU”. WHY ARE YOU DOING THIS? WHY?! WHY?

When she didn’t get a satisfactory answer from them, “The Mindy Project” star turned to Oscar winner Julianne Moore.

Meanwhile Russell Simmons was adamant that it was blue and black.

Another creative tweeter even combined the Internet’s obsession over llamas with the dress dilemma to create a pair of very stylish animals.

Read some of the funniest and most dramatic tweets about the dress below, and then blow your own mind trying to figure out what color it really is.

IDK, everyone … as epic as the Internet was today, I’m just not sure #TheDress & #llamasontheloose will stand the test of time. — Kate Fagan (@katefagan3) February 27, 2015

My husband @p2wy just asked the cat what color #TheDress is. I think he expected an answer. — April Goff (@april_anita) February 27, 2015

JUST GOT THE NEW BLUE AND BLACK IPHONE!!! #THEDRESS pic.twitter.com/IBziBPdSPz

No joke, we asked what question would you pose to Obama? You said: what color is #TheDress ? proud of you Portland. pic.twitter.com/hQ4M31TQup

The camps have been decided. This is how the revolution begins. #thedress

We see it as blue and yellow, but we may be a tiny bit biased. #TheDress pic.twitter.com/JGs4XuyiZ8