It isn’t often that TheWrap gets to play a role in shutting down a pro-Nazi publication, which happened last week in Germany. After all, we cover Hollywood, not European history.

But we decided to investigate Bauer Media Group early this year in the wake of a lawsuit against the German-owned publisher by Tom Cruise, over their published report that the movie star had neglected his daughter, Suri.

Bauer published the story in In Touch magazine, and has other tabloid titles like Life & Style.

As we wrote back in February, Bauer may be the biggest publisher you’ve never heard of, with 600 print publications and 300 websites in 15 countries, 50 television and radio stations and revenue it estimates at more than $2.6 billion a year.

We got a tip that the privately-held Bauer Media had subsidiary divisions that were sympathetic to the Nazi military past. And moreover that these connections were not deeply hidden.

We assigned Andrew Gumbel, a veteran investigative reporter (and a German speaker), to the story, who through legal filings found that the subsidiary that publishes Der Landser, Pabel Moewig, has been owned by Bauer since the early 1970s.

What is Der Landser? A military adventure magazine that specializes in World War II stories sympathetic to Hitler’s armies and that enjoys brisk sales among skinheads and neo-Nazis. The Germany magazine Der Spiegel once described it as “a specialist journal for whitewashing the Wehrmacht.”

Gumbel found several other interesting threads, including that Bauer had in 2012 shut down a far-right wing magazine called Zuerst!, whose publisher, Dieter Munier, has been involved in the German neo-Nazi movement for 40 years. 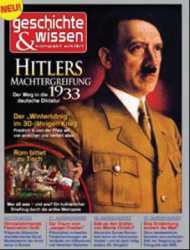 He found other magazines, including one called “Geschichte & Wissen” [“Science & Knowledge.”]) that has run cover pieces on Hitler seizing power (complete with large color photo of the Fuehrer) and on Hitler’s family. Meanwhile another magazine, “Militaer und Geschichte” (The Military and History), has run cover stories on Hermann Goering, the Nazi armed forces chief, and on the Nazi party.

We were surprised that no English-language publication had ever connected such a major global publisher to these highly questionable publications. Who were they for? What purpose did they serve?

We called Jewish organizations, including the Wiesenthal Center, to inquire if they were aware of Bauer’s pro-Nazi ties. They were not.

Also see: From In Touch to ‘The Fuehrer Speaks, the People Listen’ – a Gallery of Bauer’s Holdings (Photos)

In August, the non-profit took action, calling on Amazon and Apple to stop selling the title and asking Germany’s politicians to see if Der Landser was in violation of the country’s laws prohibiting pro-Nazi speech. It turns out they had commissioned a study that found:

“The stories in the Der Landser magazine sanitize the Third Reich by presenting stories of conventional warfare out of context. They methodically reduce the war to stories of German heroes, purposely ignoring the crimes committed by their units as if they are irrelevant. The war they present appears to be an adventure, albeit with some casualties.”

As a result of this exposure, there have been calls in the United Kingdom for Ofcom – the equivalent of the FCC – to deny Bauer’s application for a radio license to buy Absolute Radio, a huge radio station, on the grounds that the company is not “fit and proper” to be a broadcaster.

For its part, Bauer maintains that it is halting publication of Der Landser for strategic reasons, not because of any legal issues.

After commissioning their own review by a German lawyer, Bauer said that he came to the conclusion that Der Landser “complies fully with the stringent legislation applicable in Germany and that it neither glorifies nor trivializes National Socialism.”

The Bauer story is only beginning, it does not end with Der Landser. We will continue to follow the progress of a company with a fascinating publishing agenda, and perhaps more secrets in its history.