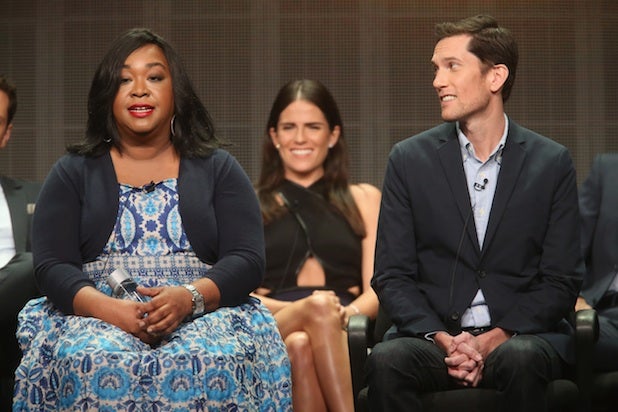 The producers and cast of ABC’s “How to Get Away With Murder” had to dispel a few misconceptions about the show during Tuesday’s Television Critics Association press tour.

On the new series from creator and executive producer Pete Nowalk, Annalise (Viola Davis) is a well known attorney and professor. It’s a deep privilege to be chosen to take her class, which places first year law students at Annalise’s firm. This season’s students will soon get embroiled in a murder case that tests everyone’s morals.

But with all the thrills and drama surrounding the class, the producers insist that there’s some real law at work during the series.

Also read: ABC President Paul Lee on ‘Rising Star’s’ Slow Start: ‘We Were a Little Disappointed With the Numbers’

“She’s definitely a law professor,” Nowalk argued. “She is popular and a real draw for the university. She gets to do what she wants. But, I definiteley think she’s teaching law. I could never go to law school. I’d be terribly bored. So, it’s fun to find ways to make law school fun.”

In fact, the show employs executive producer Betsy Beers‘ husband as its legal consultant. “He is a great resource for me,” Norwalk said.

Also, with Shonda Rhimes executive-producing, one reporter was insistent that the “Scandal” and “Grey’s Anatomy” executive producer explain the similarities between she and Davis’ character.

Also read: Shonda Rhimes on ‘How to Get Away With Murder’ Title: ‘We Don’t Consider a Hashtag When We’re Writing a Show’

“It doesn’t feel autobiographical. I didn’t write it, so it’s not about me,” she said.

After further pressing, Rhimes had to clarify further. “She’s not like me at all. She’s a fascinating, interesting character who’s incredibly complex, as played by Viola, that make her really intriguing and I think we may want aspects of her in us.”