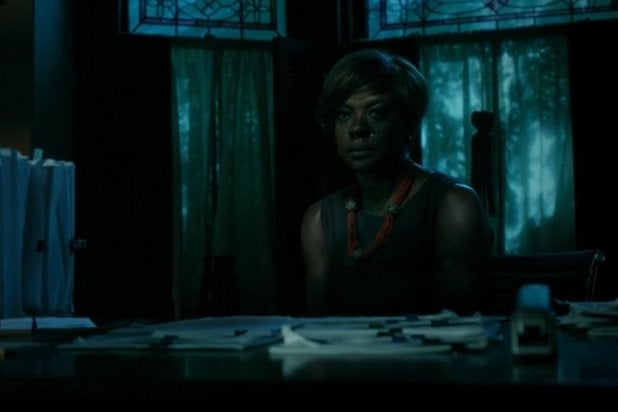 (Spoiler warning: Do not read on if you have not yet seen Thursday night’s midseason finale of ABC’s “How to Get Away With Murder” entitled “Kill Me, Kill Me, Kill Me”)

In its ninth episode and midseason finale, ABC’s “How to Get Away With Murder” did some housecleaning. For two months, the series has jumped around time showing the aftermath of Sam’s (Tom Verica) death. The build-up to this finale was precipitated by the viral hashtag #WhoKilledSam, and finally the question was answered.

See video: 'How To Get Away With Murder's' Jack Falahee Teaches Alfred Enoch About Twitter So They Can Discuss #WhoKilledSam

“HTGAWM” clearly isn’t going to be a show that drags things out. They could have left fans wondering until the series makes its return to ABC on Jan. 29. Instead, like Shonda Rhimes‘ “Scandal” before it, “Murder” is looking to keep things moving.

This is “TGIT,” Shondaland, #OMGWTFTV if you will. It’s all about non-stop shocks and momentum, so rather than mire us in a mystery for even an entire season, “HTGAWM” wrapped it up in less than half a season and set the stage for looking ahead.

See video: 'How to Get Away With Murder's' Karla Souza Drops Hints on #WhoKilledSam

The storyline served two purposes very well for the show. It hooked viewers in right away by offering them intrigue and a fun mystery, and it rewarded them with a relatively quick payoff by providing answers Thursday night.

It also served as a perfect way to introduce the cast of characters to the viewers. By so quickly putting them into such an extreme situation, fans were able to see the fortitude of this group of young people under the stewardship of the masterful Viola Davis.  After this trial by fire for the group, fans are either in or they’re out.

Based on the overwhelming social media response to the freshman series, as well as its solid ratings in a tough 10 p.m. ET  timeslot, fans are most definitely in.

As for the killer, there are at least two people culpable in his death. The students found a drunken Sam in Annalise’s (Davis) house and things quickly got ugly. After a struggle involving all of them, Michaela (Aja Naomi King) accidentally pushed Sam over a bannister.

But that didn’t do him in. When Sam started strangling Rebecca (Katie Findlay), it was Wes (Alfred Enoch) who came to her rescue, and in doing so killed Sam by smacking him in the head with the trophy.

The biggest surprise of the night occurred when Wes came back to the scene. He wasn’t alone when he was apologizing over Sam’s body. Annalise was right there, and told him not to be sorry.

So while there were answers, there are yet more questions. Annalise was there before Sam’s body was even moved, so what role (if any) did she play in the cover-up? And with its first major mystery solved, what tantalizing stories do the creators have in store for 2015?