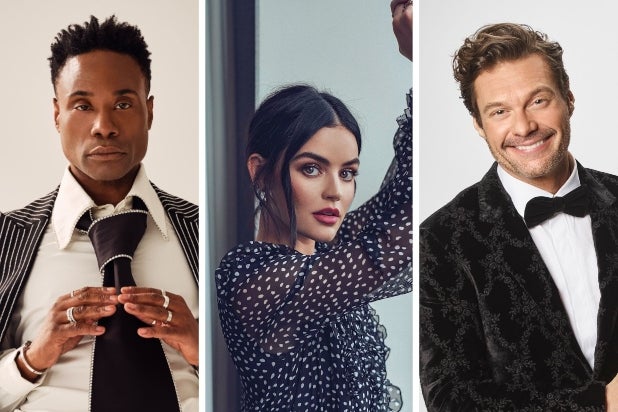 There won’t be much partying this New Year’s Eve, but there will certainly be something to party about.

The end of 2020 is finally upon us, and even though things will mostly be virtual, “Dick Clark’s New Year’s Rockin’ Eve” is still marching on. So if you’re ready to watch the ball drop on this hellish trip around the sun, here’s what to do.

ABC will be broadcasting the show live starting at 8/7c on Thursday, Dec. 31, with Ryan Seacrest returning to host for his 16th year in a row.

Billy Porter and Lucy Hale will be back again this year as co-hosts to help Seacrest out with the festivities in New York City while singer Ciara will host the event in Los Angeles for her fourth year in a row. Musician Big Freedia will host the central time zone celebration from New Orleans.

In case you were wondering, the broadcast event will be closed to the public — no huge crowds freezing their butts off in New York City to watch the ball drop this year.

You can watch the show live on TV, on ABC.com, or on the ABC app, and you WILL need a valid TV provider login for the stream.

As for musical guests, this year’s headliner is Jennifer Lopez, who will strut her stuff right before the ball drops at midnight in Times Square. Porter will sing a duet with Cyndi Lauper (they’re both alums of the broadway show “Kinky Boots”), and Jimmie Allen and Machine Gun Kelly will also perform in New York. In Los Angeles, Miley Cyrus, Brandy, Doja Cat, Ella Mai, En Vogue, Julia Michaels, JP Saxe, Lewis Capaldi, Maluma, Megan Thee Stallion, Nelly, and Saweetie will perform. In New Orleans, PJ Morton will do a rendition of the classic number “Auld Lang Syne.”

But the 49th annual celebration has something else up its sleeve. President-Elect Joe Biden and his wife, future first lady Dr. Jill Biden, will do their last interview of the year with Seacrest during the broadcast, delivering a message of “hope, unity and best wishes,” according to the press release.

We’ve been waiting a long time for films like “Coming 2 America,” “A Quiet Place Part II” and “F9”

Instead of writing a new list of the most anticipated movies of 2021, we could just link you to last year's list. COVID-19 forced studios to shelve many of their biggest blockbusters until next year. And it wasn't just a date on a calendar either: many of these movies got full blown trailers, late night show appearances and marketing campaigns hyping us up before the pandemic pulled a fast one. In some regards, it's a fool's errand putting together any sort of calendar list, because 2020 proved constantly shifting dates or a sudden move to streaming is no longer a sign of a bad movie but is just par for the course. All of these movies were meant to come out at some point in 2020, and this doesn't even include hot titles for early next year such as "Cherry," "The Many Saints of Newark," "Cinderella," "The United States vs. Billie Holiday" and more. Keep in mind that all of these dates are still subject to change.