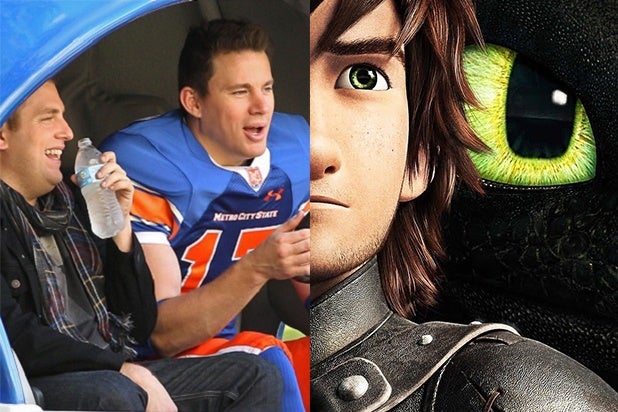 DreamWorks Animation’s 3D family film “How to Train Your Dragon 2” will open between $55 million and $70 million when it hits theaters on June 13, according to pre-release tracking that came on line Thursday.

That’s a broad range, but the weekend looks like it will be a big one at the box-office in any case. Sony’s “22 Jump Street” is also debuting, and the initial tracking puts the R-rated Channing Tatum-Jonah Hill action comedy at between $45 million and $50 million. The openings are three weeks away and the marketing campaigns are still kicking in, so both films are hoping to build momentum.

DreamWorks Animation is banking on “Dragon 2,” which picks up the story of the young Viking Hiccup and his dragon Toothless, for a rebound. It’s coming on the heels of “Mr. Peabody & Sherman,” which forced DWA to take a $57 million writedown in April.

The opening for the Fox-distributed “Dragon” may not hit the high end, with Angelina Jolie and “Maleficent” landing the week before and certain to attract women, and “22 Jump Street” likely to draw older teens. But it will be the only animated film in the market until Disney’s “Planes: Fire and Rescue” lands on July 18, which should give families plenty of time to catch up with it.

“22 Jump Street” will open two weeks after Universal’s R-rated Seth MacFarlane comedy “A Million Ways to Die in the West” and one week before another Sony comedy sequel. the PG-13-rated “Think Like a Man Too.”