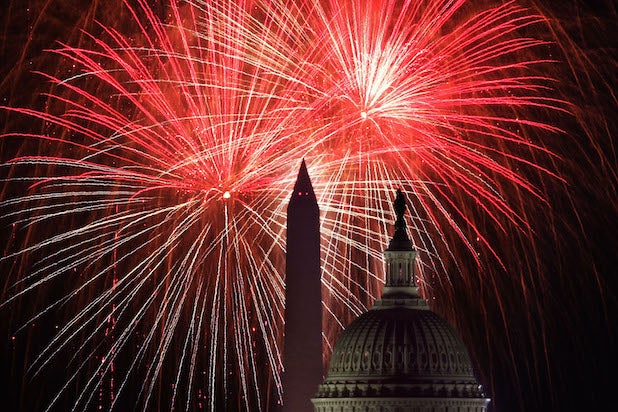 NBC’s fireworks spectacular isn’t the only game in town — especially if that town is Washington, D.C. PBS’ “A Capitol Fourth” is the country’s longest-running live national Fourth of July TV celebration.

This 39th version of the spectacular will be hosted by John Stamos, with “The Voice” Season 16 winner Maelyn Jarmon singing the national anthem. The program is a co-production of Michael Colbert of Capital Concerts and WETA, Washington, D.C. Michael Colbert is executive producer.

But how do you watch this thing?

“A Capitol Fourth” airs on PBS from 8 to 9:30 p.m. ET. It’ll also run on the American Forces Network and on NPR, and stream live on Facebook, YouTube and PBS.org. Additionally, the special will be available as Video on Demand programming from July 4 to July 18.

Below is PBS’ description:

This July 4, “A Capitol Fourth” continues its 39-year tradition of celebrating our nation’s independence on the West Lawn of the United States Capitol building. Stamos returns to host the country’s longest-running live national July 4th TV tradition. “A Capitol Fourth’s” family-friendly Independence Day celebration will commemorate our country’s 243rd birthday with all-star musical performances, and remains unaffiliated with any other July 4 events around the country, and in other locations in Washington, D.C.

If that lineup doesn’t sound appealing to your little one, don’t worry, because PBS is also bringing out “Sesame Street” residents Big Bird, Abby Cadabby, Rosita, Elmo, Grover, Bert and Ernie to “perform a musical medley of patriotic favorites,” as well as songs the kids should know from their hours spent watching the long-running children’s program.

What to Watch on 4th of July Weekend: A TV Viewing Guide

From “Stranger Things” to “Macy’s 4th of July Fireworks Spectacular”

Independence Day weekend is once again upon us, and in-between the firework-watching, beer-drinking, hamburger-and hot dog-eating, and other traditional displays of patriotism, you may find yourself in need of some TV to watch. Look no further, because TheWrap's got it all mapped out. Here's what to watch this weekend, from the third season premiere of "Stranger Things" to the "Macy's 4th of July Fireworks Spectacular."