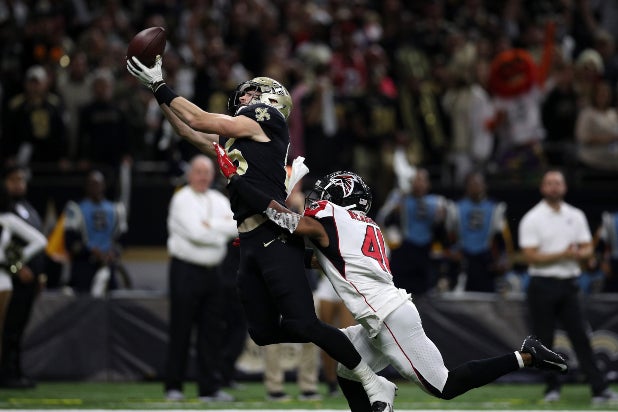 There are three main ingredients to Thanksgiving: turkey, family and football.

Once again, the NFL has three football games to sit and watch either with, or — if you’re trying to avoid any contentious political talk — without your family. This year, the Dallas Cowboys and Detroit Lions host their customer Turkey Day games — the Lions will host the Chicago Bears, while the Cowboys welcome the Buffalo Bills. Fox will air the Bears-Lions game at 12:30 p.m. ET, and CBS gets the Bills-Cowboys matchup at 4:30 p.m. ET.

NBC will air the nightcap at 8:20 p.m. ET between the New Orleans Saints and Atlanta Falcons, a rematch of last year’s Thanksgiving night game, though this time the venues moved from the Mercedes-Benz Superdome in New Orleans to… Mercedes-Benz Stadium in Atlanta (we swear these are different stadiums). In fact, the Bears-Lions matchup is also a rematch from last year’s Thanksgiving.

Also Read: Rob Gronkowski Says He'll Return to the NFL - But Only If the Patriots Sign James Corden (Video)

For those with a pay-TV subscription, it’s easy: Just turn on Fox, CBS or NBC. If you want to stream the game, pay-TV subs can watch over the internet via authenticated apps from Fox Sports, CBS Sports and NBC Sports, as well as the NFL app and on places like Foxsports.com, CBSSports.com and NBCSports.com.

CBS All Access will also carry CBS’ Bills-Cowboys game for those who are subscribers — they offer a 7-day free trial — but will not stream the game for free over its CBSSports app, like it has done in years past. Also, subscribers of vMVPDs like Hulu Live, SlingTV and YouTube TV will have access to the games, provided they carry the local broadcast stations in your market.