“Paranormal Activity: Next of Kin” is due to put a new twist on the found footage horror franchise, which is now on its seventh installment. This latest film is directed by William Eubank and written by Christopher Landon (“Happy Death Day”), and follows a young girl (Emily Bader) tracing her family roots back to an Amish household out in the country. As she gets to know her relatives, she makes some disturbing discoveries.

Is “Paranormal Activity: Next of Kin” Streaming?

“Paranormal Activity 7” will start streaming Friday on Paramount+. It will not be released in theaters like the previous six films in the franchise were, because the pandemic has already delayed its release several times.

What Is “Next of Kin” About?

The seventh film in the “Paranormal Activity” franchise is a reboot of the series that tells the story of Margot (Emily Bader), a young woman who wants to learn more about her mother. A friend accompanies her out to the house in the Amish countryside where her mother grew up, filming parts of the experience. Several relatives begin to behave a bit strangely — for example an elderly woman seems to have drifted off in a trance and started peeling the skin on her wrist instead of potatoes, and Margot asks a little girl about her doll whose name is the same as Margot’s mom, Sarah, and the little girl says Sarah is still here. As Margot and her friend do more research, some frightening elements come to light. 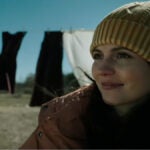 Also Read:
‘Paranormal Activity: Next of Kin’ Trailer Puts a ‘Midsommar’ Twist on the Franchise (Video)

What Are the Other “Paranormal Activity” Films About?

The first and second films in the franchise follow sisters Katie and Kristi as they deal with a supernatural force later determined to be a demon haunting both their houses and families. The demon comes to possess certain members of the family, which leads to dire consequences. The third installment rewinds 20 years to when the sisters first meet the demon who Kristi calls Toby. Toby haunts Katie’s neighbors, the Nelson family, in “Paranormal Activity 4.” “The Marked Ones,” or the fifth film, visits 18-year-old Jesse Arista who has visions of Katie and Kristi as children. Jesse’s friends loop Kristi’s stepdaughter — Ali Rey — into the plot in order to help Jesse. The sixth and most recent film finds the Fleeges family living in a house built on the same foundation of the home where Katie and Kristi grew up. The Fleege’s daughter Leila can see Toby, who leads her to do some terrible things. The sixth film seemed like the final installment in the series until the announcement of “Next of Kin.”