If it is to be said, so it be, so it is – after a two-year hiatus, “Succession” is finally back! Backstabbery and betrayal lurk beneath every gilded surface in the world of the Roys – a family as dysfunctional as any other, but with a media empire, billions of dollars and several helicopters at their disposal. Nobody is ever quite sure where they stand with unscrutable patriarch Logan (Brian Cox) – least of all, his four children, Shiv (Sarah Snook), Kendall (Jeremy Strong), Roman (Kieran Culkin) and Connor (Alan Ruck).

The critically-acclaimed drama’s Season 2 finale had viewers on the edge of their seats when Kendall made a serious move against his father. The cliffhanger ending left everyone’s fates up in the air – and opened the door for a major power shakeup in Season 3.

Whether you’re a die-hard fan or a newcomer to all the drama, here’s everything you need to know ahead of the new season’s premiere.

When does Season 3 of “Succession” come out?

“Succession” premieres Sunday on HBO and its streaming service, HBO Max. New episodes will be released each week at 9 p.m. ET/PT.

Where can you watch or stream Season 3 of “Succession”?

“Succession” will be airing weekly on HBO and HBO Max. You can subscribe to the premium HBO Max package for $14.99 per month, or to the ad tier version for $9.99 per month.

Where can you watch the first two seasons of “Succession?”

With a subscription, you can catch up on the first two seasons of “Succession” via HBO’s streaming service, HBO Max. You can also watch the show by adding HBO packages to your existing Hulu or Amazon accounts. Individual seasons and episodes are available for purchase on iTunes, YouTube and Amazon. 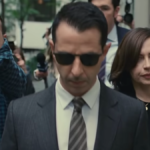 What is “Succession” Season 3 about?

Season 3 will pick up where the previous one left off, with the fallout from “Number 1 Boy” Kendall Roy drawing a fresh line in the sand between himself and his father at an explosive press conference. Potential heirs Shiv, Connor and Roman will have to choose sides while trying to regain control of the family’s hold on the company, which may be ripped from their grasp at a looming shareholders’ meeting. Nicholas Braun returns as the bumbling but increasingly schemy Cousin Greg, alongside his frenemy, Shiv’s husband Tom (Matthew Macfadyen). J. Smith-Cameron and Hiam Abbass reprise supporting roles as trusted advisor Gerri and Logan’s wife, Marcia.

A number of A-list guest stars are joining the lineup this season: among them, Oscar-winner Adrien Brody as a wealthy investor and Big Little Lies’ Alexander Skarsgard as a tech CEO. With creator and showrunner Jesse Armstrong at the helm, a cohort of new and familiar names will be writing and directing different episodes, which filmed in Italy and New York.

Check out the Season 3 trailer here.