If the Tribune Company’s $12.9 billion bankruptcy filing in December signaled the death knell for newspapers such as the Los Angeles Times, the Chicago Tribune and the Baltimore Sun, the ripple effect on television has yet to be fully felt.

The bankruptcy includes Tribune’s 23 local television stations, many of them in the country’s top markets and prime licensers of such shows as “Two and a Half Men,” “Family Guy” and “Friends.”

Those shows, and the production companies that make them, are among the creditors that will be taking pennies on the dollars owed them from licensing deals — a harsh blow in an already strained economic environment.

* Disney-ABC Domestic Television is taking a massive $60 million write-down on its deals with Tribune stations, the studio confirmed.

* And Warner Bros. — Tribune’s largest studio creditor – is owed $23.7 million, according to the bankruptcy filing.

But that’s just the first layer of pain likely to be felt in the television business. 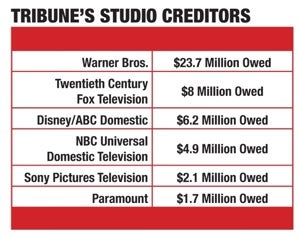 For example, the future of WGN, the Tribune’s flagship station in Chicago, remains very much in doubt, according to knowledgeable television executives. Founded in Tribune Tower itself, WGN is well known for its local programming and relationship with the Tribune-owned Chicago Cubs.

Tribune sold the Cubs for $900 million in January.

Gary Weitman, a spokesman for Tribune, told TheWrap, “Our stations are all doing business as usual, and our broadcasting operations are not affected by the filing.”

A number of cracks in Tribune’s empire are already showing. The company’s deal to syndicate CBS’s new daytime talk show featuring preacher T.D. Jakes has been put on hold until 2010.

Fox recently outbid Tribune for the rights to syndicate “How I Met Your Mother,” a show that is expected to net $350 million in its first four years of syndication. The deal was particularly significant since that show was one of the few half-hour comedies available for syndication.

NBC-Universal’s “30 Rock” and CBS’s “The Big Bang Theory,” produced by Warner Bros., are the next shows up for syndication.

Lisa Howfield, general manager of KVBC-TV NBC in Las Vegas, said Tribune’s bankruptcy has not affected her station, which is not owned by Tribune.

However, she predicted that Tribune’s decline will change the way local stations and their owners license syndication rights from studios. Typically, the studios agree to license the rights to a show for one to five years for a fixed rate. Howfield, for one, prefers to set contracts for her station on a year-to-year basis.

“When the contracts begin to expire, we’ll have to negotiate more carefully,” Howfield said. “I can see the business changing to a system based on a show’s ratings performance as opposed to locked in-rates.”

She added: “Maybe syndicators will wake up and decide to bargain with stations individually.”

Not everyone in the television business believes that the Tribune bankruptcy means fewer buyers for syndicated television.

One prominent television agent, who declined to be identified, insisted that because of the sale of the Cubs, Tribune would have more cash than before to license programs. The problem, he said, is there are ever-fewer scripted shows to license.

“Their purchasing power will increase once they go through bankruptcy,” said the agent. “The issue is not that they’re not going to be buying, but what’s available to put into syndication since there haven’t been any major comedies launched in the last couple of years.”

A more pressing question, he said, regards Tribune and the future of the troubled CW Network. Fully 13 of Tribune’s 23 stations are CW affiliates, and if — as many expect — the CW does not survive the next year, the viability of those stations comes into question.

“If CW goes away, suddenly you have clearances in New York, Los Angeles and Chicago that will be looking for programming,” he said. “So the Tribune becomes a more important player, because they control that valuable real estate.”