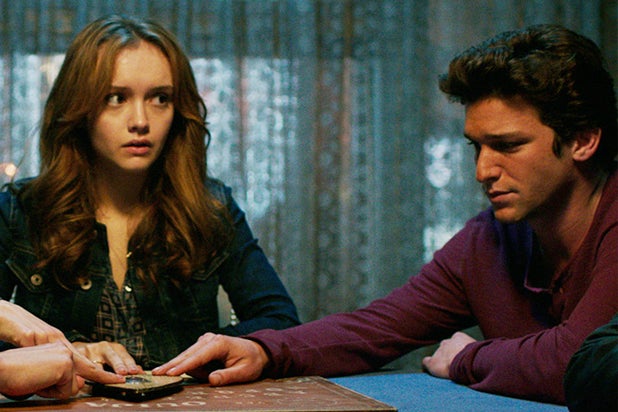 It was originally envisioned as a blockbuster in the vein of “Pirates of the Carribean,” but by the time “Ouija” hits theaters Friday, it will look very different.

When Michael Bay‘s Platinum Dunes came on board to produce the film for Universal Pictures based on the “Ouija” board game we all played as a child, it was going to involve a $100 million plus budget. It also had a plot revolving around armies of undead rising around the world, featuring at least four major international locations.

But it was never made. In 2011, Universal put the kibosh on that version of “Ouija,” citing budget concerns. It wasn’t long before it was back on the table, though this time the project no longer involved international armies of supernatural spirits.

With the help of microbudget horror master Jason Blum and his Blumhouse production company, Universal took apart the risky, potential blockbuster and put it back together, turning it into an intimate, pared down horror flick. It would become the sort of film Blum’s company has come to be known for, such as the “Paranormal Activity” franchise, “Insidious” and “The Purge.”

The new film, which shares only the titular board game with its never-realized predecessor, was made for $5 million and stars a group of relatively unknown young actors, led by “Bates Motel’s” Olivia Cooke and “Secret Life of the American Teenager” star Daren Kagasoff.

The action takes place mainly in one house, in just a couple of interior rooms, and the scares come from the anticipation of something jumping out rather than highly produced supernatural sequences. And rather than appealing to a wide array of moviegoers, the new “Ouija” has a very specific target audience: 13-19 year old girls.

“Traditionally, that’s who’s really supported our horror movies,” Fuller said. “We learned that lesson on ‘Texas Chainsaw Massacre.’ We were really surprised, since it was such a grisly movie, but girls came out in droves for that.”

To market the film, Universal turned to Snapchat, unveiling the first ad on the social media app used primarily by women in their teens and early 20s. Like they did with the Scarlett Johansson-led “Lucy,” the studio also partnered with a popular Youtube star — Kian Lawley — to produce a series of viral videos to promote the film’s release.

The big change in strategy on all fronts seems like it will pay off. “Ouija” is expected to make anywhere from $18-$25 million on opening weekend. That number would already quadruple its budget.

For Blum, the microbudget aspect of the film was the sole reason his company came on board.

“I can imagine what it would look like, and I’m sure it would look really cool,” he said of a potential $200 million “Ouija” movie. “But we’re not in that business so that’s not a movie we would have added value to help make. I can certainly imagine paying to go see it.”

Fuller doesn’t rule out the possibility that a potential sequel to the film could be told on a higher scale, citing Platinum Dunes’ previous collaboration with Blumhouse, “The Purge.” The sequel, “The Purge: Anarchy,” was slightly more expensive and took place on a wider canvas, Fuller revealed, because audiences demanded to see the world of “The Purge” outside of just one house.

“Part of that decision [about ‘Ouija’s’ future] will have to be based on what the audience tells us after they see the film,” Fuller said.

For his part, Blum thinks there are some stories that just can’t be told on a microbudget — the “Transformers” franchise,”The Fast and Furious” movies and, of course, “Star Wars.”

Would he make a $200 million “Star Wars” if Disney came calling? “It would be tough to turn that down, but believe me, it’s never going to happen,” he laughed.