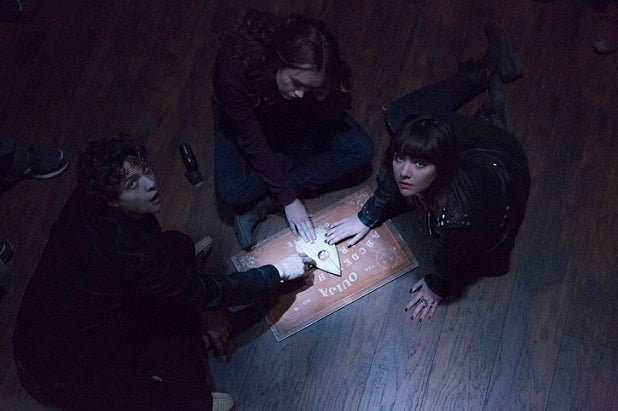 Moviegoers will get a jump on Halloween this weekend, when Universal rolls out its spooky board game adaptation “Ouija” on Friday.

The teen-targeting PG-13 horror movie is expected to scare up around $20 million, say the analysts, and knock the Brad Pitt war saga “Fury” out of the top spot.

Lionsgate’s Keanu Reeves assassin thriller “John Wick” is projected to open just under $10 million, and the Bill Murray-Melissa McCarthy comedy “St. Vincent” should be in the same range in an aggressive nationwide expansion by the Weinstein Company.

Six years ago, “Ouija” was envisioned as a tentpole movie, with Brad Fuller and Michael Bay‘s Platinum Dunes producing and McG attached to direct. After a series of script rewrites on the project inspired by Hasbro’s classic spirit board, Universal decided to skip the risk associated with a blockbuster’s budget. But after Jason Blum revived “Ouija” as a micro-budgeted teen movie, the studio came back in 2012 is producing along with Bay, Fuller, and the toymaker.

That decision is looking pretty good right now, since “Ouija” should triple its $5 million production budget in its first three days. The release date seems ideal — this is the time of year when even mainstream moviegoers will seek out a horror movie, and it should also play well next weekend.

“Ouija” is looking very strong on Twitter and Facebook, and was leading ticket sales Wednesday morning at online ticket broker Fandango. Universal will have it in 2,856 theaters.

Also read: ‘Ouija’ Movie Back On at Universal

“John Wick” is that rarest of all films — a Keanu Reeves movie that the critics love. The R-rated tale of a retired hitman who comes out of retirement when gangsters kill his dog is still at 100 percent positive on Rotten Tomatoes.

If “John Wick” can hit $10 million it will top the debut of Reeves’ last movie, the big-budget bomb “47 Ronin.”

It is doing OK on social media ahead of “The November Man” on Twitter but trailing the Pierce Brosnan spy tale on Facebook, which opened to nearly $8 million in August. Lionsgate will have it in roughly 2,400 theaters.

Chernin Entertainment’s “St. Vincent” will be in more than 2,000 theaters as of Friday. It’s been in limited release for the past two weekends, initially in four locations and then 68 in its second, so this weekend’s rollout is an unusually aggressive expansion.

“It’s been playing really strongly, particularly in the suburbs, so we decided to go for it,” Lomis said. “There’s not a lot like it out there in the marketplace, and the demand (from theater owners) was there.”