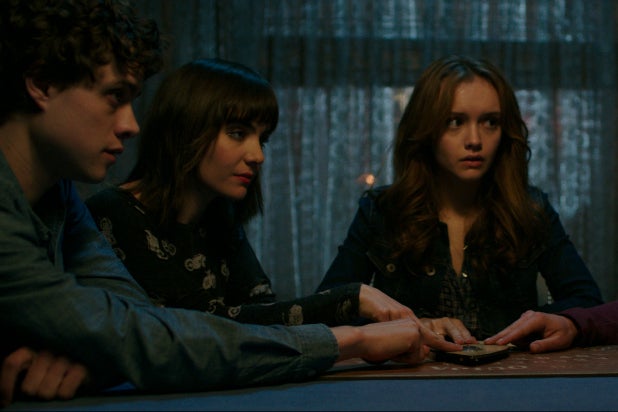 You kids today — it used to be that if you wanted Rice Krispies treats at a slumber party, you had to make them yourself instead of buying them pre-wrapped off the shelf. And if you wanted to scare yourself and your friends with a little flavor of the occult, you had to actually play with a Ouija board instead of popping in the eventual “Ouija” DVD that will no doubt become a staple of tween get-togethers.

“Ouija” seems to be an odd choice for toy magnate Hasbro’s movie division: throughout the film, our young heroes are warned not to play with the board and are told time and again to destroy the thing. If the idea is to move more units among young consumers for Hasbro, the film’s main goal is to portray the letterboard-and-spanner set as something that can actually commune with the dead, with the added benefit of also annoying your parents.

Mind you, “Ouija” is safely PG-13, so any encounters with the other side are never as grisly as they would be in, say, a new “Hellraiser” sequel. And even though the movie relies heavily on the SUDDENLY LOUD jump-scare for the first half or so, first-time director Stiles White (who also co-wrote with Juliet Snowden) dredges up some appropriately creepy imagery and plot twists that work within the framework of the kid-friendly rating.

Before the opening credits, we see teen Debbie (Shelley Hennig, “Teen Wolf”) playing Ouija on her own, despite a flashback in which young Debbie tells her BFF Laine never to use the board solo. Debbie kills herself, and the grief-stricken Laine (Olivia Cooke, “Bates Motel”) gathers her boyfriend Trevor (Daren Kagasoff, “The Secret Life of the American Teenager”), her sister Sarah (Ana Coto), Debbie’s beau Pete (Douglas Smith, “Big Love”), and friend Isabelle (Bianca Santos, “The Fosters”) to say goodbye using the mystical toy.

(Despite the title, the implement is almost never referred to as a “Ouija board” in the film, with characters calling it “the board” or a “spirit board” instead. Almost every shot features “OUIJA” in big letters across the top, however, so Hasbro can’t say they didn’t get their marketing money’s worth.)

Naturally, the kids soon discover that they’ve tampered with forces beyond their ken, and it’s up to Laine to figure who killed Debbie (and who’s coming after her close friends, one by one).

The script lazily offers up a wise, older Latina character (played by Vivis) to furrow her brow with concern and provide convenient intel about mucking about with the spirit world. (There’s also another character with intimate knowledge about what’s been going on in Debbie’s house, played in a cameo appearance by an actress who has made a second career out of juicing up dopey horror movies.)

Given its double burden of being both a toy adaptation and a bloodless kiddie horror show, “Ouija” winds up being more fun than you might think, even if it’s the sort of film you can’t really take seriously for a second. A handful of creepy scenes and at least one decent surprise should be enough to make less-demanding fright fans move their fingers (and their ticket money) to “YES.”