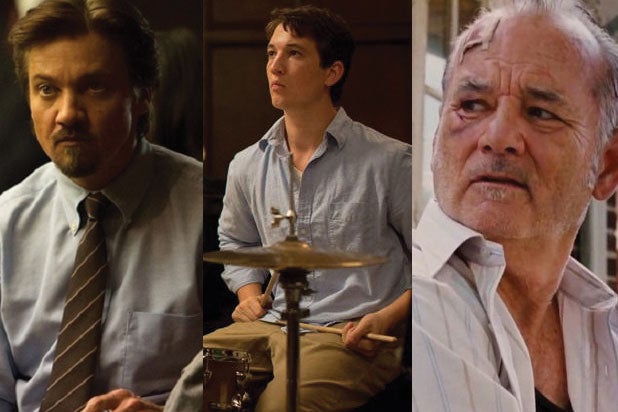 Can the micro-budget business model that has worked so well on horror films for producer Jason Blum translate to other genres?

We’ll begin to get a feel for that this weekend when the Miles Teller jazz drama “Whiplash” makes its debut at the specialty box office for Sony Pictures Classics. It’s the first time that the horrormeister’s Blumhouse Productions has ventured outside the horror genre with a film release.

“Whiplash” stars Teller (“Divergent”) as a driven young jazz drummer who attends one of the best music schools in the country and must deal with the school’s abusive maestro (J. K. Simmons).

“Whiplash,” on which Blum partnered with Jason Reitman‘s Right of Way, was written and directed by Damien Chazelle. It was the opening night film and won the audience and jury awards at this year’s Sundance Film Festival. It’s a critical favorite and has an impressive 97 percent positive rating after 60 reviews at Rotten Tomatoes.

Like most of Blum’s horror movies, “Whiplash” has a very modest $3.3 million budget. The production crew from “The Purge,” one of Blum’s breakout horror hits, even worked on the drama. But there won’t be any “Purge”-sized returns this weekend, as distributor SPC is platform-releasing “Whiplash,” and it will be on just six screens.

To be clear, this isn’t a strategic shift for Blumhouse, whose focus will remain on horror even as it broadens its scope. TV production was a key component of the recent 10-year extension of its production deal with Universal, and it was a co-producer on HBO’s “The Normal Heart,” which won Outstanding TV Movie at the recent Primetime Emmys. Another non-horror film, “Jem and the Holograms,” is scheduled for a 2016 release.

Also read: How Fox Marketed ‘Gone Girl’ Into a Hit by Keeping Its Secrets

“Kill the Messenger” is based on the true story of Pulitzer Prize-winning journalist Gary Webb, who reported on the origins of the U.S. crack epidemic of the 1980s and alleged that the CIA was aware of major dealers who were smuggling cocaine into the U.S., and using the profits to arm rebels fighting in Nicaragua.

Focus Features will have it in 374 theaters.

It made its debut at the Toronto Film Festival, where it was runner-up for the People’s Choice Award. Naomi Watts and Chris O’Dowd co-star. Distributor the Weinstein Company will have it in two theaters in New York and two in L.A.

TWC is also opening “One Chance,” a British comedy-drama about “Britain’s Got Talent” winner Paul Potts, in around 40 theaters. It’s directed by David Frankel, written by Justin Zackham and Simon Cowell is among the producers.